posted on Jan, 18 2016 @ 07:07 PM
link
How do you balance the playing field? I was born to hard working but poor parents and got nothing except what I have earned. I had no chance against the Romney kids or Chelsea Clinton. They are born to life with EVERYTHING. How is that fair? It is not fair period.

Now what to do about it? I was born of this Earth, how come some rich kids can be born owning most of it without working a moment for it? This has gone on long enough.

I can kick many of there rear ends and take it back. Why is that not the law of the land and will it be again one day? I think it will if they keep letting it go this way. Maybe 20 years? Less?
edit on 18-1-2016 by Xeven because: (no reason given)


We all just want the same opportunities...

It's called fruits of your labor.

The whole point, for generations, was to leave your kids, better off than you were. I may not like the disparity of wealth in the world, but I'm not gonna put it on the kids of the wealthy, just because they were born.

Nor would I put it on the heads of people who are wealthy, outside of a few sectors that I know have robbed the people blind, but that's a government problem really, cause they let them do that.

That has been the way for thousands, upon thousands of years, and outside of the utopia that the Venus Project claims to want to create, it's going to remain that way.

Here...take my handkerchief for your tears....

At one point, an ancestor of those rich kids worked hard, saved money, and left a legacy for their children. This accumulates over generations. This is something anyone with half a brain can do.

Unfortunately, the "Waaaah! Why me?" group out there is growing.

originally posted by: nullafides
a reply to: Xeven

Here...take my handkerchief for your tears....

originally posted by: onequestion
lets look at it in terms of opportunity...


We all just want the same opportunities...

I wonder though, what would that do for psychological development? So many filthy rich children are just the worst possible people ever, and their wealth most certainly was the largest factor in that mentality.

Personally, I think the abolition of money all together would be best, and the right to basic human needs, such as shelter, food, entertainment, health, and so forth be something that every human has the freedom of.

The design of that concept sounds totally unreachable, unfortunately. But, we can wonder.

The best thing so far, at least for me, is to strive to live off the grid, out of modern society, and in self reliance, alongside others you trust.

50 years ago someone could start with nothing and make a decent life for themselves, regardless of their family background. That isn't true today.

Today, it is less about hard work and more about what opportunities you were born into. The poor and middle class don't really have a chance anymore. Sure, there are the occasional success stories, but the reasons we hear about them are because they are rare and not the norm.

Unfortunately, the "Waaaah! Why me?" group out there is growing.

That is the same group that will snap sooner or later and those dwindling numbers of folks with money will be hiding and cowering in the safe rooms hoping those bad poor people would just go away and not hang them from the closest tree.....ignore the poor they will not go away they will just get angrier ....

the *real* meaning is:

The "Rich" have the ability to establish their greeds needs.

They also get a small loan of a million dollars and later in life run for president.
edit on 18-1-2016 by Swills because: (no reason given)

There is a way to achieve equality of outcome. 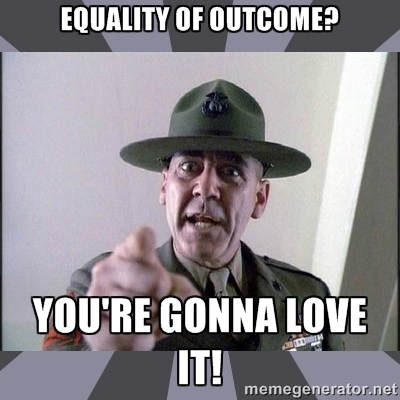 posted on Jan, 18 2016 @ 07:46 PM
link
As someone who's experienced both mild wealth and abject poverty, I can say that there is no even playing field and someone "making" it from poverty is the exception to the rule.

With education, for example, the differences between wealth and poverty are immense and there is no comparison... in atmosphere, exposures, level of individual attention, materials, subjects and sheer quality of instruction ...make it seem like the schools exist on two different planets, not just different social classes.

Land and title reigns supreme, however, many of those children are born into a lifestyle that after having a life of my own choosing, I wouldn't even for a second chose to be born to a life of certain expectations. Similarly, if you are the so-called "bloodline" you are still married off or marriage arranged.

Down here we labor for our gains because our parents left us nothing. The thing is, my children will not be so unfortunate nor will they be expected to be what I tell them to be. So I'm gonna go out on a limb and say my children will be happier than theirs with all their money.

My children won't own countries or large corporations but they will own land rich with natural resources. Because I love them not because I love myself or wealth.

posted on Jan, 18 2016 @ 08:02 PM
link
In the end it all come down to what one believes and how honest and mature each person will be in facing their own circumstances in this world. And then asking themselves `Is what I am doing helping or hindering the big picture.` We all know how messed up the world is at the moment especially in places and areas like the usa. Worldwide in many cases for people today, it just seems hopeless and futile and we see the wealthy as the problem. but the OP makes a good point about people being raised in a atmosphere of privilege and irresponsibility that do not truly care or see the outcomes of their actions. The system will not last much longer as it is because it needs to fall from the top downwards like a house of cards and be lifted up from the bottom and [smiles] I do think that eventually this will happen. In fact I suspect that behind the scenes this is already in progress.

posted on Jan, 18 2016 @ 08:08 PM
link
Wealth can also equal more influence over the political process and the policies politicians pass that have an effect on the daily lives of the people. We have learned from rulings like Citizens United that the wealthy have an advantage over the poor in that they can use their money to protect their own interests.

Better yet, we have seen how the wealthy can use their money to influence changes/legislation that is profitable for them. The poor and middle class cannot do that.

Standing on the "fruits of your own labor" sounds good and it is true to a certain extent, but the fruits of our labor does not mean we have the same ability to manipulate government towards our own interests, as does the wealthy.
edit on 18-1-2016 by introvert because: (no reason given)

Correct, the fact that wealth = influence isn't really the fault of the money or the wealthy, but the institutions that we built which rely on that wealth.

This is a governance issue, not one regarding the fact that there's too little people with too much pie. They just used the system to their advantage. It's like Donald Trump when he admits to using the bankruptcy laws to his benefit.

Of course he did. The stupid lawmakers made stupid laws that let people take advantage of certain things, why would a self serving person, such as a corporation or wealthy person not use those advantages?

Eliminate the opportunities for people to take advantage of the law, and you will solve this wealth gap issue.

isn't really the fault of the money or the wealthy............stupid lawmakers made stupid laws that let people take advantage

It was the money and wealthy that lobbied lawmakers to make stupid laws to their advantage. Without wealth you have little to no chance of eliminating those opportunities that favor the wealthy.