cover of a conspiracy magazine

posted on Jan, 18 2016 @ 03:44 PM
link
I did this for a contest using photoshop. The theme was "create a magazine cover", and the rules are not to use copyrighted images, but there was another rule : it is prohibited to use "premanipulated images", and in this case the alien because it is CGI (or at least it seems to be, it could be the face of a human that has been manipulated to look like this) even if it is a free image that can even be used for commercial purpose.

Anyway, I figured I would post it here instead. And here are the source images I used : alien, stars and crop circles. 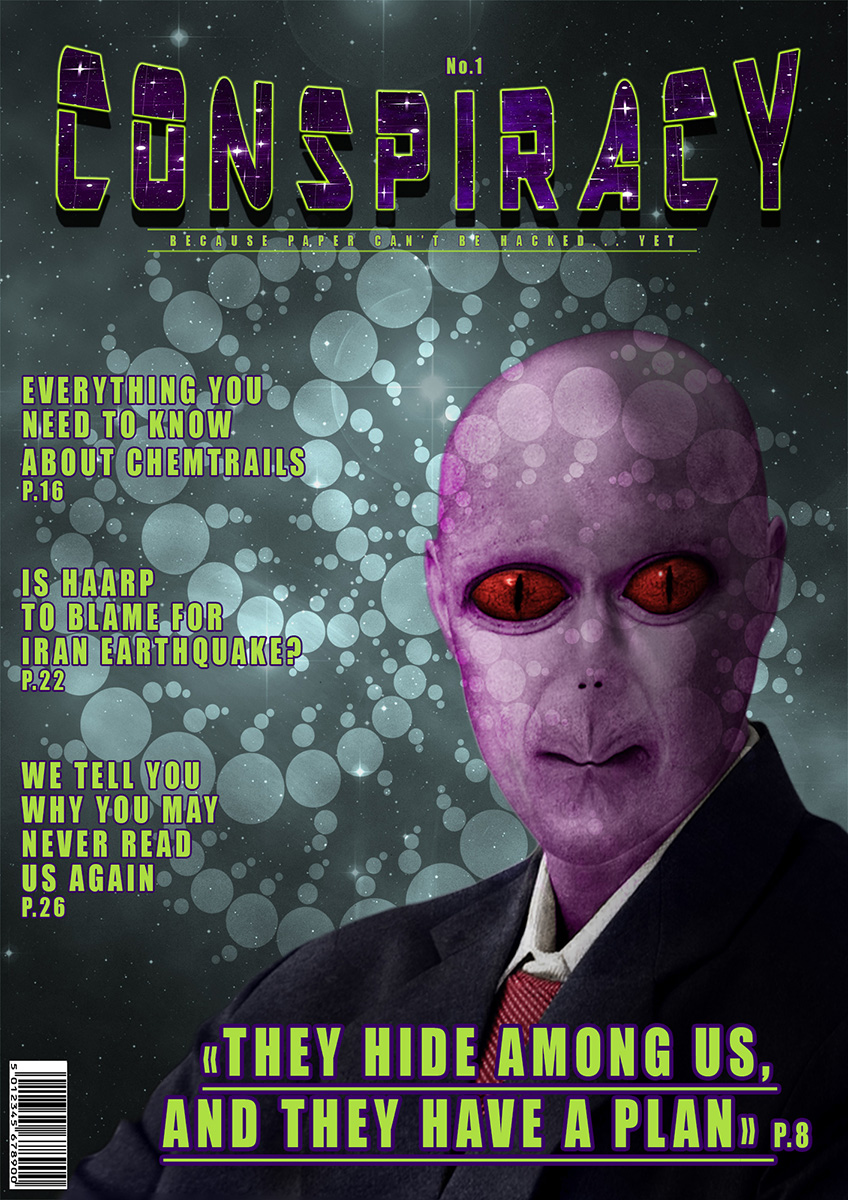 Seems a little sparse on story's.
If you look at a standard issue magazine they almost have the index on the cover these days.
Obviously more info on the cover appeals to more tastes

Apart from that it looks good
edit on 18-1-2016 by Raggedyman because: (no reason given)

Nice Love the creepy Reptilian and the star detail inside of the title!

I'm with Night Star, I'd totally pick that up.

It's a pretty decent foundation. I'm a professional graphic designer for the past 11 years, so there are quite a few things I could point out that may help polish it up, like typeface choice and the magazine wordmark, but overall it's not too bad.

But, if you're looking for constructive criticism, I'd be glad to throw that out there, I just don't want to do it without you having asked for it

Yes, you can tell me. I know there are many things that seem out of place, like for example the sort of subtitle that doesn't look good and doesn't catch the eye. The font of the headlines also doesn't look good. To tell the truth the only things that I really like are the alien(which needs more work and I am not happy with the purple color of his skin), the title (which at the beginning was blue instead of purple), and the background (it's the star image on top of the crop circles image on top of the cloud effect of photoshop on top of a grayscale gradient) almost totally desaturated with a little blue and green. Also the "A" in the title looks distorted too much . That took me two days, I had a different version that I trashed and kept only the alien, and the font and distortion of the title.

Yeah, the alien looks okay--the only things that bother me about it are the pucker effect in the lips and the size of the eyes in relation to their distance apart, but it's an alien, so that's just subjective concerns which need not be heeded.

I'm glad you dislike the font used in the title--from a constructive point of view, I would say that the quality of the lettering and the type of lettering cause it to look relatively cheap or unrefined. That alone would make me not take the magazine seriously. Couple that with the "arc upper" curve of the title, and it takes away a lot of the credibility that could be contained within the publication.

You've already addressed the illegibility of the subtitle/tagline, so I'll leave that alone except to say that yellow isn't the best choice for type for the cover of a magazine (in most instances).

Same goes for the headlines, as well, plus the typeface that you chose (Headline or Haettenschweiler or something similar) is actually harder to read than if you were to have chosen a medium-weight without the outlines...a subtle drop shadow without any blur and held close to the letters is a much better approach than a relatively heavy outline. And I would stay away from heavily-condensed typefaces and combining that with spacious tracking, as it kind of defeats the purpose for the usefulness of a condensed typeface.

Anyhoo, that's my constructive criticism, for the most part. Hopefully it'll help in future endeavors.

Take care...and don't take anything personally, as criticism is how we grow.