I debated putting this thread in the mud-pit versus the 2016 election forums, but I felt like the nature of the evidence being presented here is going to invite some nastiness. So I went ahead and put it here.

So anyways, to those people holding out hope that Trump is going to clean up in the general election if gotten the nominee, I have some bad news for you. This article breaks down Trump's appeal outside of the Republican party, and frankly it doesn't look to good. In fact it looks embarrassing.

Contra Rupert Murdoch’s assertion about Trump having crossover appeal, Trump is extraordinarily unpopular with independent voters and Democrats. Gallup polling conducted over the past six weeks found Trump with a -27-percentage-point net favorability rating among independent voters, and a -70-point net rating among Democrats; both marks are easily the worst in the GOP field. (Trump also has less-than-spectacular favorable ratings among his fellow Republicans.) 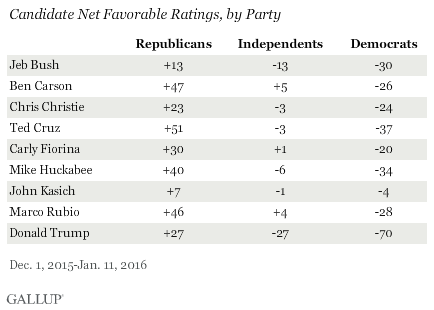 However the author wanted to get a broader look at the numbers so he went back and recalculated using HuffPo's pollster data since Nov 1. Click on my link for the author's data. I don't want to clutter up the thread with too much external content.

Here's some really stunning data. While Trump's favorability has gown among Republicans, he seems to lose equal ground among Democrats and Independents.

This is not just a recent phenomenon; Trump’s favorability ratings have been consistently poor. It’s true that his favorability numbers improved quite a bit among Republicans once he began running for president. But those gains were almost exactly offset by declines among independents and Democrats. In fact, his overall favorability ratings have been just about unchanged since he began running for president in June: 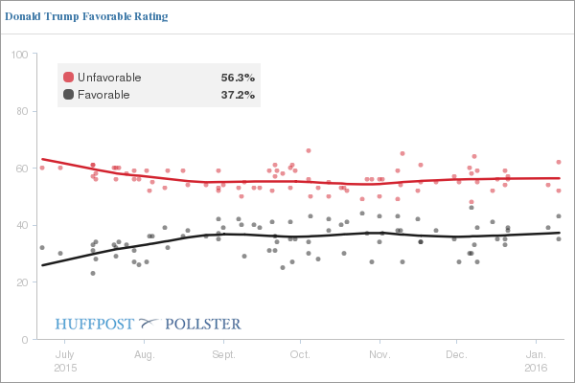 The rest of the article goes on about head-to-head matchups, but even it admits those are stats are worthless at this stage of the game. You can read it if you want, but it's just icing on the cake so I won't post it here. So answer me this, where is this silent majority that's supposed to vote for this guy? We (independents/liberal) all hate him.

Contrast this with Bernie Sanders who is the left's extremist that is running. He is literally the only candidate with a positive net favorability rating. That tells me that Sanders is more likable among Republicans than Trump is among independents/liberals. To the people endorsing Trump, you are setting yourself up for failure.

Some people don't want to show their support for Trump because to do so labels you a racist, bigot, or whatever else the kind loving liberals will throw at you.

In real life I'd much rather act like a Liberal to appease them and not have to deal with them than be the conservative I am and be constantly attacked and belittled by them.

I'm probably not the only one who feels this way.

S+F This will be an interesting thing to look back on after the election for sure!

blargo
+6 more
posted on Jan, 18 2016 @ 10:33 AM
link
Great analysis. I hope you have flame proof clothing, because I do not think the Trumpsters let data get in the way of their beliefs. I am grabbing the popcorn on this one.
edit on 18-1-2016 by blargo because: fixed spelling error


Trump is aware of his standings with the general electorate. That's why I maintain that he has another agenda and being POTUS isn't it.

Bizarre circus is American politics. It's hard to take it seriously.

Watching the Donald at Liberty U now. He even looks like a clown with those white eyes and fake tan.

Here's the thing about that. I don't think the "silent majority" exists. In fact, I think most of Trump's support is from the "loud minority" category and are just invoking the "silent majority" rationalization to disavow evidence that Trump isn't as well liked as they'd like to hope he is.

Well I've authored a few Trump threads already so I know how they go, but thanks for looking out for me.

It's possible, like I said we'll see after the election.

But I have evidence backing up my position. Your position is backed up by wishes and dreams.

To the people endorsing Trump, you are setting yourself up for failure.


And much like consistently voting against their own best interest, setting themselves up for failure is rapidly becoming a staple trait for the GOP.

Especially among their right-wing element.

Here's the thing about that. I don't think the "silent majority" exists. In fact, I think most of Trump's support is from the "loud minority" category and are just invoking the "silent majority" rationalization to disavow evidence that Trump isn't as well liked as they'd like to hope he is.

I totally agree. Most registered voters are either registered as D or R. The silent "majority" is actually a thin minority; commonly referred to as moderate independents....and most people I know, who fall into that category, want nothing to do with Trump. The "silent majority" is a political myth.

I was under the assumption that the "silent majority" referred to the Fundamentalist Christians. If they couldn't pull out a win for Romney or Palin; what hope do they have with Trump? Besides the minorities don't trust Trump and most women find him creepy. Trump knows this as well. Very strange.....

The thing is that Christian fundamentalists are all Republicans and likely already represented in the polling numbers. The rationale is that Trump supporters are mad and pissed off. Well discontent people tend to be vocal about their unhappiness. So the idea of a "silent" Trump supporter is just absurd to begin with.
edit on 18-1-2016 by Krazysh0t because: (no reason given)

I'm not surprised-I don't need to look out the window to know that the sky is blue.

Say what you will about Hilliary, I think she and her PR are doing all they need to do. She doesn't need to go on the offensive as Trump continually shoots himself in the foot and I think the democrats are content to just sit and watch which is the bare minimum they need to do at this point.

If I could gaze into my crystal vodka bottle I dare say that Hilliary will act swiftly just before the election and remind people of what Trump has said and what he proposes- The man with the ferret on his head has jumped the gun far too early and that will hurt him and he'll have to resort to attack ads as a frantic do or die bid for POTUS.

Hillary is having her own problems right now though. She has started attacking Bernie because he's been inching up in the polls, only to discover that Sanders has a similar support base as Trump in that the more he's attacked, the larger his support from his fanbase grows.

With my totally unofficial bumper sticker poll; I see plenty of Bernie stickers a few for Hillary and have yet to see one Trump sticker here in the Rocky mt. west.

posted on Jan, 18 2016 @ 11:07 AM
link
I believe that the moderates and independents in the middle of the political spectrum..those that could vote for Hillary or Bush depending on policy or could have voted for Romney over Obama...those people swing the general election.

Hard core republicans and hard core democrats won't vote for the other side, but the moderates will vote for any side.

Those people want a sane, middle class promoting president with some solid ideas for the country. Those voters don't like Trump or Carson and are weary of Paul and Sanders.

But then you have the X factor...the young voters...the Millenniums. Those peeps helped get Obama in office and they do like Sanders and Paul and other candidates. Trump is not likable them nor is Clinton or Bush and I would content nor is Cruz.

Trump's appeal and staying power has been underestimated from the moment he declared his candidacy. I think the 100% consensus among the pundits, and other assorted political experts, was that:

It is way to early to be pulling/relying on unfavourable ratings on any particular candidate. But, here are some other predictions:

But...it is definitely going to be the most entertaining election season in memory!

originally posted by: olaru12
a reply to: Krazysh0t

I was under the assumption that the "silent majority" referred to the Fundamentalist Christians. If they couldn't pull out a win for Romney or Palin; what hope do they have with Trump? Besides the minorities don't trust Trump and most women find him creepy. Trump knows this as well. Very strange.....

Equally strange is that he took up such a polarizing stance on immigration given that Bush only won Florida by 537 votes. Florida's hispanic population has grown by 50% since 2000.

It's one thing to take the position he takes on immigration, but it's a whole different thing to use polarizing crass-speak when stating that position.

I agree with you, I don't think Trump has ever been interested in winning the general election. I think he's up to something else.