posted on Jan, 16 2016 @ 07:26 AM
link
I think most will be aware that there were early Jewish sources that claimed a certain Julius Pantera was the actual Father of Yeshua ben Pandira but how many know that they actually found his grave...?

Sources of the Pantera Claims

In 1859 a gravestone surfaced in Germany for a Roman soldier called Tiberius Iulius Abdes Pantera, whose unit Cohors I Sagittariorum had served in Judea before Germany – romantic historians have hypothesized this to be Jesus’ father, especially as ‘Abdes’ (‘servant of God’) suggests a Jewish background.

That's his actual gravestone there on the left which reads; 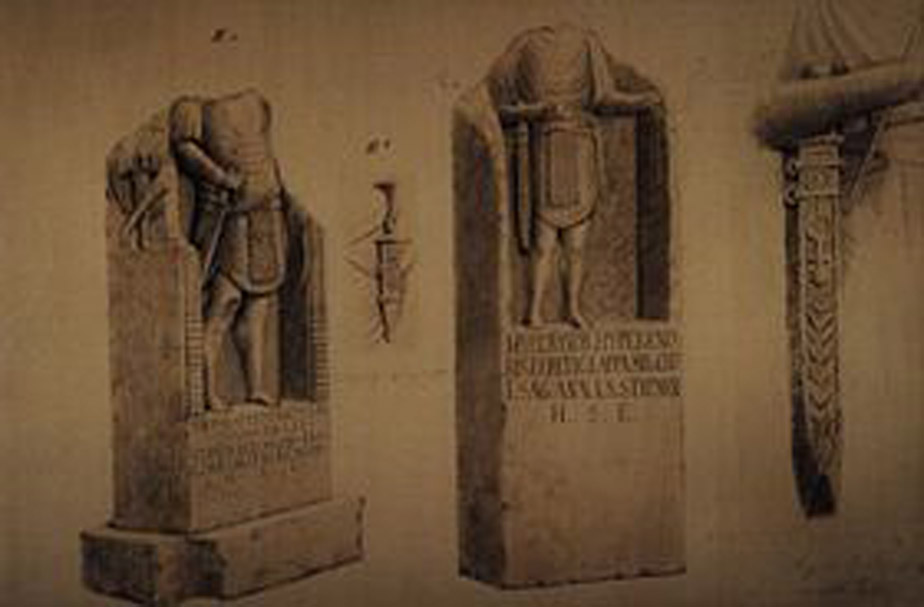 Amazing really that such details can be reconstructed with regards to a humble Centurion.

It appears this First Cohort of Archers moved from Palestine to Dalmatia in 6 AD, and to the Rhine in 9 AD. Pantera came from Sidon, on the coast of Phoenicia just west of Galilee, presumably enlisted locally. He served in the army for 40 years until some time in the reign of Tiberius. On discharge he would have been granted citizenship by the Emperor (and been granted freedom if he had formerly been a slave), and added the Emperor’s name to his own. Tiberius ruled from 14 AD to 37 AD. Pantera’s 40 years of service would therefore have started between 27 BC and 4 BC.

As Pantera would probably have been about 18 when he enlisted, it means he was likely born between 45 BC and 22 BC. He could have been as old as 38 or as young as 15 at the time of Jesus’ conception in the summer of 7 BC.

The Gospel According to the Romans

Now my own interest here, having just considered the role of the Panther in Mesopotamian symbolism and the Association of the Panther with the Constellation Perseus, because relating to this are associations of immaculate conception through Divine impregnation from the Perseid meteor stream, in Greek mythology giving birth to Perseus. 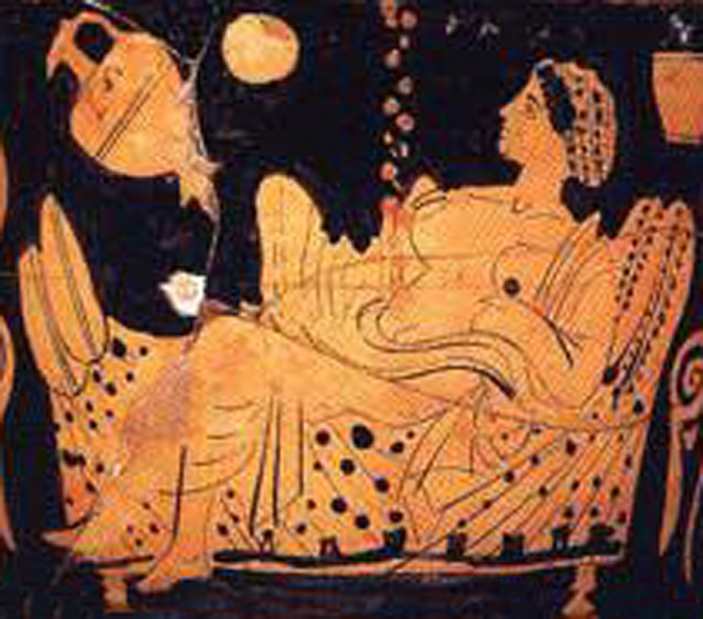 Thus from a curious amalgam of Hellenistic and Mesopotamian lore Divine conception was of the Panther/Perseus, in the form of shooting stars, but also according to Mesopotmian tradition the winged Panther disgorged from it's mouth death and destruction in the sense of the Perseid meteors and comet under the auspices of Ninurta, who in some sources was the causer of the Great Flood representing Enlil his Father, this is the context of the Mesopotamian seals Ninurta as bringer of destruction, a good candidate for having caused the younger Dryas impacts, and there are accounts of Ninurta's Flood storm weapon causing great destruction. 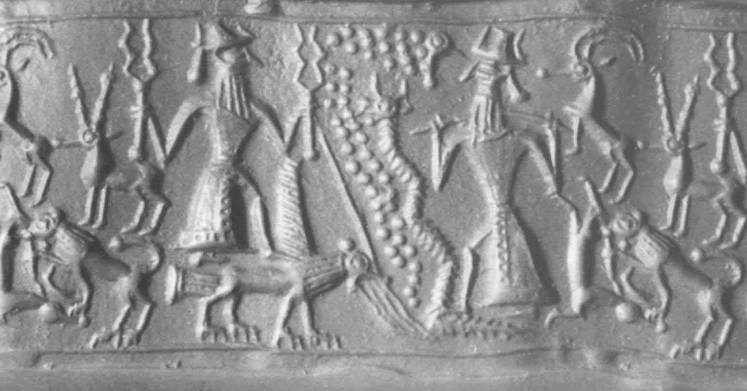 The mace snarled at the mountains, the club began to devour all the enemy. He fitted the evil wind and the sirocco on a pole), he placed the quiver on its hook An enormous hurricane, irresistible, went before the hero, stirred up the dust, caused the dust to settle, levelled high and low, filled the holes. It caused a rain of coals and flaming fires; the fire consumed men. It overturned tall trees by their trunks, reducing the forests to heaps, Earth put her hands on her heart and cried harrowingly; the Tigris was muddied, disturbed, cloudy, stirred up.

The birds there tried to lift their heads to fly away, but their wings trailed on the ground. The storm flooded out the fish there in the subterranean waters, their mouths snapped at the air. It reduced the animals of the open country to firewood, roasting them like locusts. It was a deluge rising and disastrously ruining the mountains.

Ninurta and the Cosmic Super Weapon

Thus not only a Virgin birth can be associated with the Panther but also the bringer of Apocalypse, all of the archetypes in the Book of Revelations source from the Post Babylonian doctrine of the Son of Man, which derived from the role of Marduk as Celestial enforcer, which derived from Ninurta.

The notion then of a great day of judgement, returning as the Cosmic enforcer is then entirely Mesopotamian, the agenvy through which one would expect to be able to destroy the world in order that a new one might be created is through the unleashing of the Perseid stream.

Of course it was the case that all natural phenomena had been ascribed Divine personification and Ninurta's role was management, whether the farming of the land his primary role, protecting it's borders as the warrior or putting down insurrection, if it was considered that destruction had been necessary in order for a new start Ninurta would would have been understood as responsible for carrying that out, as part of his job description, so the Apocalyptic speculation derived from earlier precedents.

This may be a case of how much can be read into a name, perhaps sometimes too much, and the breath of a Panther by any other name doth still smell as sweet...

The panther represents Christ, who drew all mankind to him. The dragon represents the devil, who feared Christ and hid from him. The many colors of the panther symbolizes the many qualities of Christ. After Christ was sated with the mockery and abuse of the Jews, he fell asleep in death and entered the tomb. Descending into hell he bound the dragon. After three days Christ left the tomb and roared out his triumph over death. The sweet breath of the panther that drew all animals to it is a symbol of the words of Christ that draw all to him, Jews and Gentiles alike.

This Is A Celebration As Like The Fireworks Dislay From New Years.
When The Eye Opens Up On The Night Of The Shower... They Say: "Por Su Deux!"

It's a fascinating tail to be sure, the association of the Panther with the Perseid stream dates all the way back to Gobekli Tepe, some 11,500 years ago, it can be seen picked out on the Panther found there. 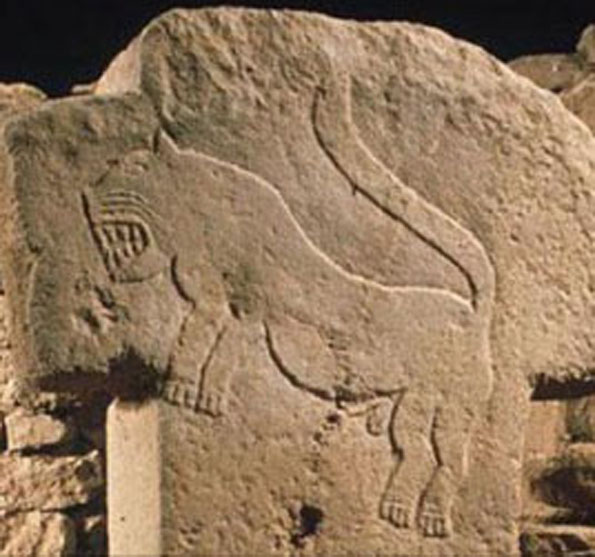 Not the sort of thing people forget i guess, death and destruction originating from that Heavenly direction, doesn't mean the same things going to happen again though, that would show a lack of Divine imagination.

I will try to grasp everything and then come back

this is I can think of when i hear pantera

Their mouths are certainly wide open, so yes i guess that's Pantera, the original cowboys from Hell were understood as Nergal and Ninurta as seen on the seals associated with the Storm Demon/Winged Panther, they had fun with meteorites.


In these first millennium BCE texts, the name of the panther is written with the cuneiform signs UD.KA.DUḪ.A, which literally translated means “The (storm)demon with the wide open mouth”

posted on Jan, 16 2016 @ 10:54 AM
link
There is some interesting myths regarding the jaguar in the amazon and southern Mexican jungles. I dont have any links but some are worthwhile checking out. I love when you write threads and post the beautiful pictures Kanzt.😊

The Ben Pantera claim only came into being very late and over a thousand years after the expulsion from Judea, it is believed that the Claim that he is the figure Ben Pantera (Son of Pantera) in the Talmud was only originated in about the 12th century as a mean's of trying to stop some Jew's from converting to christianity and was then used as a moral tale against Christ by some rabbi's for this very reason.

The other problem is when and were these additions to the Talmud or rather this later version of the post exile talmud was actually compiled?.

Of course it was a name that inspired a rock band and a 1970's supercar which was still produced right up to 1991, apparently the early model with a ford engine had a problem were the engine would sometime's explode but that may be urban legend.

So trivia aside the source of the story may have been as anti christian propeganda or perhaps more innocent later reinterpretation of an extant figure in the Talmud as Jesus of Nazareth, however I am sure someone know's the name of the Rabbi responsible for starting this claim - I did know one claim but can not remember the name or which eastern european country it was supposedly made in off the top of my head.

There are sources a lot earlier than that which i linked to in the OP;

Early Jewish sources make Jesus the son of Panthera, a Roman soldier. "Rabbi Shiemon ben Azzai has said: I found in Jerusalem a book of genealogies; therein was written that Such-an-one [a common Jewish euphemism for Jesus] is the bastard son of an adultress." (Mishnah). If true, this must have been before the destruction of Jerusalem in 70 CE, so preserves a very early tradition.

The story was also reported the Greek philosopher Celsus (c. 178): "[Celsus] accuses [Jesus] of having 'invented his birth from a virgin,' and upbraids him with being 'born in a certain Jewish village, of a poor woman of the country, who gained her subsistence by spinning, and who was turned out of doors by her husband, a carpenter by trade, because she was convicted of adultery; that after being driven away by her husband, and wandering about for a time, she disgracefully gave birth to Jesus, an illegitimate child, who having hired himself out as a servant in Egypt on account of his poverty, and having there acquired some miraculous powers, on which the Egyptians greatly pride themselves, returned to his own county, highly elated on account of them, and by means of these proclaimed himself a god.'"

(Origen Adamantius (c. 185-254), Contra Celsus, 1.28). "But let us return to where the Jew is introduced, speaking of the mother of Jesus, and saying that 'when she was pregnant she was turned out of doors by the carpenter to whom she had been betrothed, as having been guilty of adultery, and that she bore a child to a certain soldier named Panthera' . . ." (Origen, 1.32; see also 1.69)

You're right that would be worth checking out, would require expertise in Meso-American tradition though. and yes for me it's just about the pictures really..
edit on Kpm13115vAmerica/ChicagoSaturday1631 by Kantzveldt because: (no reason given)