MERKEL - Refugee crisis out of control

page: 1
26
<<   2  3  4 >>
log in
join
share:
Nustle
+6 more
posted on Jan, 12 2016 @ 07:48 AM
link
So apparently, Merkel is now finally admitting that the Refugee crisis is out of control, well who would have thought that was going to happen. That aside, reading through the below linked article, i picked up on a few of her choice phrases, which i believe may be suggestive of future increased controls, monitoring, etc across Europe. Is this confirmation of the intentions of the New world order, and is it really what the refugee crisis was all about in Europe?

Phrases i picked out which are suggestive of future changes to Germany and indeed Europe:

''Now all of a sudden we are facing the challenge that refugees are coming to Europe and we are vulnerable, as we see, because we do not yet have the order, the control, that we would like to have.'

'Nobody should act as though you can have a common currency without being able to cross borders reasonably easily.'

- Hmmmmmmmmm, that they would like to have, and suggesting the potential adverse implications for the Euro if borders are too restrictive.

Ok, so granted its the Daily Mail, not the best source, but the words from Merkel's mouth are hers. All i would like to do is point this out now, as it seems the refugee crisis and the way in which the politicians are dealing with the crisis is the signs of something bigger happening. Just my two cents, would be interesting to hear all of your views on her latest spouting session.


So apparently, Merkel is now finally admitting that the Refugee crisis is out of control, well who would have thought that was going to happen.

I'll tell you who...anyone who's out in the streets...with a feel for the pulse of the people. Anyone not sitting in their Ivory towers, surrounded by a squad of bodyguards...has seen this happening a mile away. The proof is in the pudding as they say. And the pudding in this case...might even be ATS.

Dig up some older threads from 1-2 years ago right before this refugee crises culminated...when Merkel came out with a "refugees welcome !!!!!" motto...many were face palming quietly...and some even loudly.


''Now all of a sudden we are facing the challenge that refugees are coming to Europe and we are vulnerable, as we see, because we do not yet have the order, the control, that we would like to have.'

order ? Control ? But they had all that before the crisis. The point is...you probably couldn't stop the refugees coming...but they would be coming in far fewer numbers were it not for the "most generous" invite...this gallant lady that probably hasn't seen a refugee live...just on TV.

board busyness and questions...????

I realllly don't like that woman. Her and that Janet lady who's the head of the Federal Reserve - both of them are snaky broads


Nobody should act as though you can have a common currency without being able to cross borders reasonably easily.'


I think that's a shot at the new eastern European countries who are going against the Schengen zone reinstating their borders.
Thankfully we in the UK are not in the Schengen zone or the Euro and pretty soon we won't be in the EU either , I look forward to the day we are not governed by Germany.

Merkel has created a rod for her own back by ignoring the problem until she had no choice but to open Germany's doors and let the migrants in .

''Now all of a sudden we are facing the challenge that refugees are coming to Europe and we are vulnerable, as we see, because we do not yet have the order, the control, that we would like to have.'


All of a sudden ?
I think the control she's talking about is regarding migration and how to deal with it not control over Europeans ... she already has that.

your thread was in that forum while I was responding to it. It is now moved.

'Nobody should act as though you can have a common currency without being able to cross borders reasonably easily.'


'Common currency' gains without 'Common defense' expenditure is what got you here, EU.

That and messing about in the ME with the US under NATO's banner. What did you expect?

Imo, they saw this migration coming, war tends to cause floods of refugees. Germany of all countries is familiar with that from WWII.

So whats the real agenda? Cheap labor. Feigning like they made a mistake letting in all the refugees is covering for a free slave army. These people will work for next to nothing, any wage is better than what they got going on back at home.

You mentioned the Schengen Zone in the EU; I read an article yesterday to the effect that 1) the influx of refugees will grow to 10 million and that will 2) result in the collapse of the Schengen Zone.

Whether the UK can weather this storm or not.............I don't know. Like so many US Americans, you may wake up of a day to find your country isn't yours anymore. Welcome to the new normal.


We can weather the storm as we have control of our own borders , we have a government that's aware that after the influx of EU migrants which we have no control over the population won't tolerate more uncontrolled migration.

If refugees are to be taken they should be taken from refugee camps in the region , as we are doing , and not allow people to just upsticks and move for economic reasons which Germany is doing.

This probably is the biggest test of the EU yet and I have no doubt they will again be found to be lacking , I don't doubt the influx this year will be greater than last and the sooner we abandon the sinking EU project the better.

I'm in favour of helping genuine refugees but I don't see that as giving them a permanent home , we should give them refuge until it is safe for them to return then send them home to rebuild their country.

posted on Jan, 12 2016 @ 09:54 AM
link
Merkel may have gotten Times' Person of the Year Award...but who is going to win the Nobel Peace Price for saving Germany now?

Merkel is a classic.

'Now all of a sudden we are facing the challenge that refugees are coming to Europe and we are vulnerable, as we see, because we do not yet have the order, the control, that we would like to have.'

Hmmm....more order, more control? Now I'm thinking that Europeans, especially Germans, will be the ones that will have to endure the "more order and control" of their own citizens.

I don't believe in a One World Order personally.

posted on Jan, 12 2016 @ 10:10 AM
link
It's pretty clear what she is saying.
Euro zone countries need to keep open their borders,
Immigrants need to abide by the law and the German way of doing things,
Those that don't, those that are convicted of serious crime will be expelled.

You can't flout the law of the country.

For the Germans part, there needs to be a concerted effort at integration, (she mentions that) and that likely will include rules and regulation of some kind, it's not like it's something new, they had programmes for immigrants for some time in the very recent past.

You can't flout the law of the country.

Merkel had her talk at the Jahresempfang für Wirtschaft (yearly welcome for economy).

Just after the german army sent planes to Syria and troops to somalia. Could not start more cynical...

To adress the current crisis, acting like it was a surprise, that no one saw coming.!?

Half of the population is warning about this exact scenario since at least half a year. The official answer to those was always: your racism shows.

Now saying it s not ok that criminals with multiple cases of crime still are entitled to state support. - wow. this should be common sense. Better late than never, i guess.

Here's a source in german :
synopsis


I'am no prophet, but i see dark times coming for the next election on germany.

At the moment the big coalition is in gov, a combination of left to catholic conservatives parties.
The only opposition are either far left ( ex GDR politicians who dream of the good old CCPR communism) or far right ( dreaming about the good ole NSDAP times).

That's it. There is no more valuable opposition existing.

I have good connections to germany, followed it's history and have since the 80ies (yes i am old :-) a good feeling for the general mood of the people.

Last time the mood was like this was in 89, which led to the fall of the berlin wall. An amazing revolution, it came from the people who had it, it was peaceful, it was fast and successive.

Even after 9/11 the mood was different, people have been in shock, like everywhere. But there have been massive protests against the war on Afghanistan/Iraq. Literally millions of people taking the streets, mostly peaceful.

Even the occupy movement came to germany, there was at least on the left side this smell of revolution in the air. Still mainly peaceful and only about a third or less supporting the case.

Right now, it's different. Peppersprays are sold out, words like selfdefense, pepperspray, guns are trending in the google searches.

The pitchforks are being sharpenend. Germans are - in general - rational, hardworking, dedicated and pretty efficient - in whatever they do.

It's one of those predictions which i am quite sure i am spot on. Still i know, the day i can say " told you so" will be a dark one. 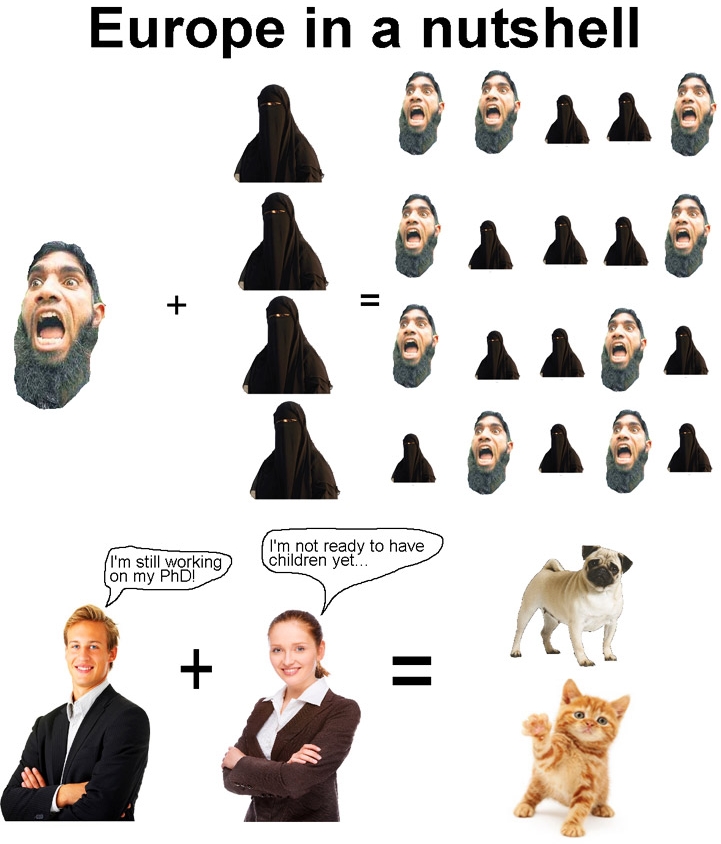 It probably feels to the people like an invasion, purposeful and orchestrated; and they have no way of defending themselves should things really get out of hand, out of order, out of control. If your own government is telling you that there isn't enough order and control, then you have citizens feeling very very vulnerable, I would assume.