This Ancient City Was Three Times Bigger Than Archaeologists Suspected 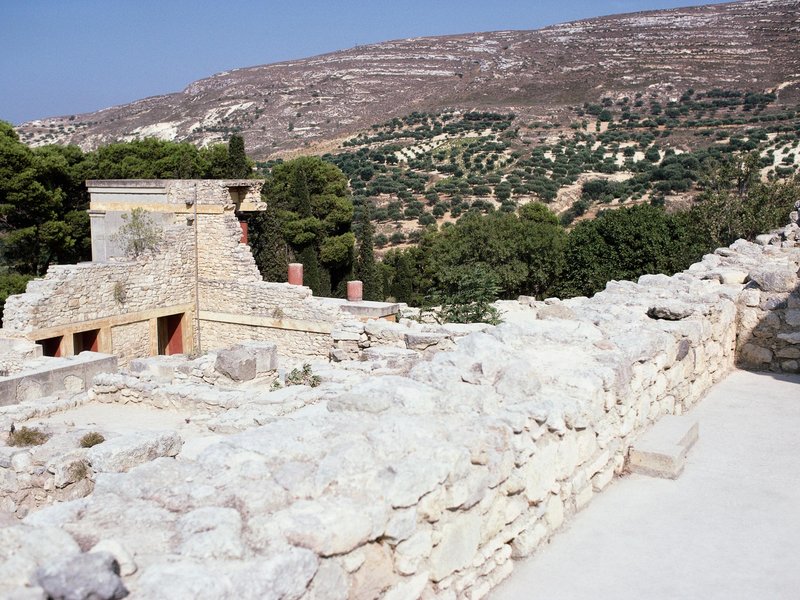 This Ancient City Was Three Times Bigger Than Archaeologists Suspected

Surrounded by turquoise waters and smiled upon by a Mediterranean sun, the island of Crete, located on the southern edge of the Aegean Sea, is best known for being the largest island off the coast of Greece. But it turns out that today’s tourist playground was also a haven for ancient shoppers. Archaeologists have discovered that the ancient city of Knossos was much larger than previously thought—and that the spectacular city was a major trade center.

Researchers from the University of Cincinnati and the Knossos Urban Landscape Project learned that Knossos was triple the size of previous estimates while doing fieldwork at ancient houses and cemeteries. In a release about the discoveries, they write that tombs spread out over a larger-than-anticipated area yielded a huge trove of ceramics, jewelry, bronze and other personal items. All that bling was imported, suggesting that the city engaged in trade with mainland Greece, Cyprus, the Near East, Egypt, Italy and all over the Mediterranean.

Knossos is considered to be Europe’s oldest city—a Bronze Age metropolis that sprung up thanks to the Minoans, believed to be refugees pushed out of Egypt's Nile delta...


Knossos has always been one of my favorite ancient sites, That and Malta, The history, the art and its location has always fascinated me. I also love these types of stories, new discoveries are always great to read about. I hope they release more information and pictures of the items they've found or will find, maybe even a map and artists rendition of how the whole area may have looked once upon a time...

I love your Ancient History stuff

posted on Jan, 11 2016 @ 11:56 PM
link
Thanks for sharing and opening our minds to the evidence that there was much more back in those days. I know there is much more to come and it is something we all should be proud of in one way or another. Human efforts to grow and be more than just an animal, nothing wrong with just an animal but we are to be more. a reply to: SLAYER69

posted on Jan, 12 2016 @ 12:20 AM
link
Great post! This is the stuff that brought me here. Hope to hear more on their finds. The past seems way more exciting than future.

All hail the Thread Slayer lol

Keep it coming Slayer fascinating as usual. I walked around Knossos years ago and loved the feel of the place and of course its stunning beauty. Can'[t help wondering what people would make of say London were they seeing it in a similar time-scale and condition. I doubt we can compete even with today's superior technology.

Somehow these ancient cities probably without their slums etc seem timeless and sacred - which I doubt they were.
I am not altogether surprised at how big it was because of its location and obvious wealth.

Have you walked around Pergamon, just going down what's left of its main street is eerily beautiful and an amazing experience because its mentioned in the Bible.


No, I haven't had the pleasure of visiting many of the ancient sites of the world, suffice it to say my bucket list is long on those types of quests, both in the new world as well as the old or ancient as the case may be.

I've been toying with a thread idea related to a few of y recent thread posts in this forum.

Thanks for an idea on a place to visit while living in Germany.

posted on Jan, 12 2016 @ 05:16 AM
link
I recall a documentary on this civilisation that came to be the centre of trading activity at its peak then was pretty much wiped out by a natural catastrophe. Evidence pointing to a tsunami generated by an underwater volcanic eruption?

Once again, thanks for sharing this Slayer. Here iam, bored witless at work and voila.....you do make a habit of this, don't you?

Knossos is a truly fascinating site but then i find all of Crete (and Cyprus) to be truly fascinating places. I also believe it must have been much bigger than previously thought. Anyhow, for those interested, here is a decent breakdown on Knossos......

One of the more facinating aspects for me was the warriors from Crete......recruited by Egypt (amongst others). Whilst long thought to be peaceful, modern archeology is overturning this idea and coming up with evidence for a warlike society (when needs arose). I have also read reports of evidence for Egypt recruiting Minoan warriors to fight for them (I think against the Hittites but could be wrong). I have been frantically looking for this but can't seem to find now. I will post if this changes.....

originally posted by: Pilgrum
I recall a documentary on this civilisation that came to be the centre of trading activity at its peak then was pretty much wiped out by a natural catastrophe. Evidence pointing to a tsunami generated by an underwater volcanic eruption?

Nearly, Thera erupted on the Isle of Santorini. Thera had a huge eruption (current findings indicate it could have been the 2nd largest eruption in the Modern Human era (after Tambora in 1815). Not only large scale destruction from pyroclastic flows, etc, and from blast waves, etc but also then a full collapse and subsequent phreatic explosions that set off even larger tsunamis.

What is also interesting is that the Santorini side of the eastern Med was covered in Basalt for hundreds of years and became difficult to navigate. Again, as in post above, i have seen evidence that this is evidenced in (much) later Mycanean poetry and story telling but once again i can't find the source for this. I apologise - i read far too much without paying enough attention!

posted on Jan, 12 2016 @ 06:30 AM
link
disgraceful deliberately ignorance of all the latest scientific progress


Knossos is considered to be Europe’s oldest city—a Bronze Age metropolis that sprung up thanks to the Minoans, believed to be refugees pushed out of Egypt's Nile delta...

originally posted by: EllasArchaiaDynamis
disgraceful deliberately ignorance of all the latest scientific progress


Knossos is considered to be Europe’s oldest city—a Bronze Age metropolis that sprung up thanks to the Minoans, believed to be refugees pushed out of Egypt's Nile delta...


Click the "Minoans" link in the article. It takes you to another page that shows the latest on their origin.

How cool would it be to go back in time for a day, and walk the "streets" of a city like this in its prime?


For everybody else this site has one of the most concise write ups on the Minoans.

I have also read some work that makes a case that Akkadian refugees(members of the royal court and high ranking military commanders) fled to Cyprus and Crete, with whom they had a long standing trade relationship, and kickstarted the Palatial period of the Minoan civilization. When the palatial period starts a new type of building shows up that is very much like Akkadian military barracks.

Nearly, Thera erupted on the Isle of Santorini. Thera had a huge eruption (current findings indicate it could have been the 2nd largest eruption in the Modern Human era (after Tambora in 1815).

Sorry, I couldn't let it pass: Taupo's Hatepe eruption was c. >/= Tambora.
Once a colleague's paper is released I'm thinking of doing a thread on the global impact of the Taupo eruption...

I keep forgetting about Taupo.......i will await that thread with interest and anticipation. I haven't read anything suggesting a Taupo eruption circa 1815 was anything like as powerful as Tambora so really can't wait.

Yayyyy slayer... concur as to neat city.. .this city had my little nerdy creative juices flowing back in the analog days of dungeons and dragons and I used it as a base model for my fantasy city, that then expanded and covered 9 3'x2' sheets of graph paper.. .heh.

The Minoans, in general, rule and some of the little scraps of life we can glean sure made it seem a laid back, sunny enclave of almost modern sane in a seething world of not- so- modern or sane.

Anyway, interesting (to me) that my little graph paper exercise might've matched the reality more than I suspected... and sorry to bore with my little memory, but the nerd needed to wonk out. Knossos rules (Gnosis).