Figuring out the age of a star has always been tricky. Not too long ago we found that measuring a star's spin could give us an approximate age when compared to other stars. And the more dense a cluster of stars are, the easier it is to assume that they're all close to the same age.

Astronomers have formed a "revolutionary" galactic map showing the estimated age of 70,000 stars across the Milky Way.

Researchers say it shows how the galaxy is formed in unprecedented detail and that it confirms long-held suspicions that it started in the middle and grew outward.

The map - presented at the 227th meeting of the American Astronomical Society in Florida - confirms the long-held theory from the large numbers of old stars gathered in the centre. 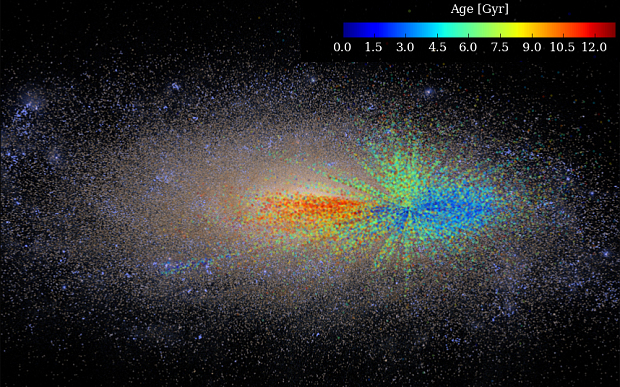 Caption: Age distribution for a sample of red giant stars ranging from the galactic center to the outskirts of the Milky Way. The youngest stars are shown in blue, the oldest stars in red, and middle-aged stars in green

The team was lead by Melissa Ness, a researcher for the Max Planck Institute for Astronomy. They've calculated the age of each star by combining data from two different telescopes. 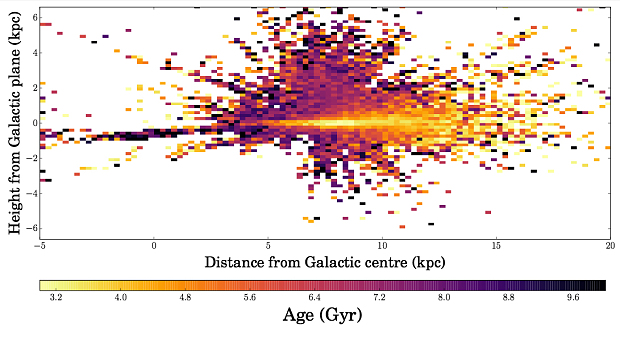 Caption: The horizontal axis shows distances from the galactic centre, the vertical axis distance above or below the galactic plane (not to scale). Color-coding shows the median age of the red giants observed at that particular position

Astronomers first established the chemical composition of the stars followed by the use of Kepler to determine their mass. They combined this data with Apogee's data and found a relation in that a star's mass and age is specific to it's color spectrum.

"This is somewhat revolutionary because ages have previously been considered very hard to get, particularly from stellar spectra," Dr Ness said. "They're important, but they're difficult.


Astronomers have always suspected that our galaxy started out as a small disk and grew from the inside out. They now have the data they need to confirm this. Now, where do we come in?

Black Holes Set the Clock for Life on Earth

The American Astronomical Society met this week and focused their efforts on one of the most enigmatic phenomenons that exist. Black holes. The general consensus is, they exist, therefore we exist.

In the decades since, astronomers and physicists have refined our understanding of black holes and their event horizons, even as we still can only speculate as to what happens past the point of no return where no light travels back towards an observer.

Scientists now believe supermassive black holes lie at the heart of nearly every galaxy in the universe, serving as essential fulcrums upon which the cohesiveness and stability of galaxies rest—allowing for solar systems like our own with planets that can support life.


Before life, Earth was subjected to a much younger, active Sun. To understand just how precious the advent of life is, our distance from the sun, during a period of reduced cosmic ray emissions, combined with a lull in planetary threats from asteroids or space matter, has left us in a period of stability and the right conditions to support life.

Astrophysicist Paul Mason of New Mexico State University thinks black holes and supernovae may have actually “set the clock” for the beginning of life, according to Discovery News.

But materials expelled by dying stars also became available to aggregate and coalesce into protective shields like the atmosphere and magnetosphere surrounding Earth, while supermassive black holes began anchoring galaxies themselves.

The expansion of the universe also diffused the constant hammering of matter by cosmic radiation, helping create the conditions for life to begin and flourish.


Astrophysicists believe that the early Universe had trouble supporting life due to star density and the emissions of cosmic radiation before expansion. Separation or at least that right amount of elbow room is necessary for the stability of an environment as well as it's safety.

Those bad events include supernovas -- the explosive deaths of very large and short-lived stars -- which were much more common in the early universe, when the rates of stars births was far higher, said Mason.

Other very bad events were the storms of radiation that might have blown from the gigantic central black holes of galaxies when they gulped down matter.

Such feeding frenzies -- and the harsh, sterilizing radiation they released -- were also more common in the past, as astronomers have learned by looking at more distant, and therefore more ancient, galaxies.


The seed of creation exists within our Universe, constantly being challenged to thrive in such unfavorable odds. We have grown out of this equation or at least a byproduct of it's own reasoning. The Universe is alive and we are it's children. I leave you with a short film on what can happen when you abuse a black hole.

originally posted by: FlyingFox
Looking at distant stars does not make them older, as we see them relatively, how they were X number of years ago.


If we are talking about stars in the milky way, then the age difference due to the time it took for the light to reach us is negligible.

The Milky Way is 100,000 LY across, so the farthest any star could be from any other star is 100,000 LY (even less for the distance of stars from our Sun, since the Sun is not on the edge of the galaxy).

Therefore, the age difference between the light we see and the actual age of the star would be less than 100,000 years -- which is just a blink of an eye in the lifetime of most stars.