An Islamic State militant executed his own mother in front of a post office in the northern Syrian city of Raqqa this week, Syrian activists said on Friday, with one monitoring organization adding that the problems began when she tried to persuade him to leave the extremist group. The fighter, Ali Saqr, 21, killed his mother in front of several hundred people for what the Islamic State called apostasy, according to the Syrian Observatory for Human Rights and Raqqa Is Being Slaughtered Silently, two groups that monitor the conflict through contacts on the ground.

If true, this is yet another example of the literal extremes some crazy people will go to in the name of a religious belief. I know that there are many examples in the U.S. of children killing their parents, but it is usually a case of them being abused (emotionally or physically), but not in the name of their religions belief system.

I wonder is this an actual punishment when one of accused of apostasy?
Is the definition of apostasy negotiable or up for interpretation, or is it clearly defined?
If defined, does this case meet that definition?


Raqqa Is Being Slaughtered Silently said on Friday that her request was not the reason she was killed. But both monitoring groups say the Islamic State had declared the mother guilty of apostasy and had ordered her death. Raqqa residents said the woman was Alawite, a member of the heterodox Shiite sect that dominates the leadership of Syrian security forces. The Islamic State considers Alawites apostates, a possible factor in the death.

However, it could be a case of using that as an excuse to eliminate a head of their opposition as well, if this aspect of the story is true.


edit on 1/8/2016 by Krakatoa because: Added additional info and added italics for readability of the names of the organizations.

posted on Jan, 8 2016 @ 07:48 PM
link
These are disgusting people who do not cherish the human being, family or not, in the name of some radical ideology.

I hope that 21 yr old gets what he deserves and rots in hell.

In some places, 90% Support Execution of Apostates


There are about 1.6 billion Muslims in the world. In Egypt 90% of Muslims agree that apostates deserve execution if they want to leave Islam. And the brutal and barbaric Sharia law is supported in majority through the entire Muslim world.

I ran across this chart from The Economist detailing Muslim attitudes towards sharia law and apostasy: 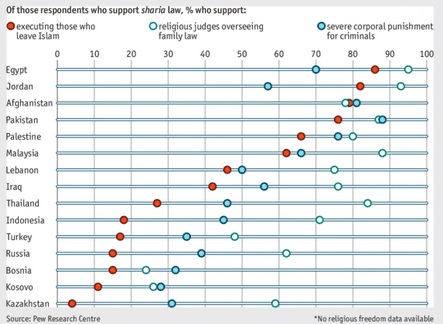 In Egypt, for example, more than 70 percent of the public supports shariah law, and almost 90 percent of those individuals also support executing those who leave Islam.

Whether the Islam of Egypt or Kazakhstan is “true Islam” is a matter to be worked out by Muslims, but the fact remains that it’s not a mere “few extremists” who want to execute apostates, and that mindset is a problem for all of us. 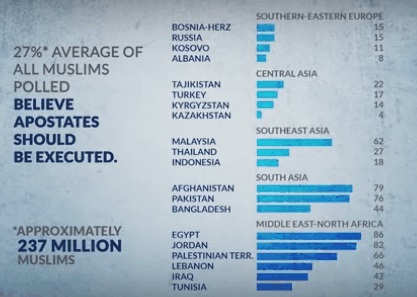 Boko Haram apparently does the same .

ISIS is just a bunch of bloodthirsty thugs who have no moral compass.

Maybe we should do what we can to get the ones who want to leave out of their territory then nuke the rest of them.

Well, they are ISIS loyal...so, really, par for the course.

What stops Daesh pieces of sh#t from claiming to be "ones that want to leave"?

How would one go about vetting the innocent?
Not like these guys wear uniforms...

There is no way. But there are a LOT of the people in ISIS controlled areas who are open supporters of what they are doing.

posted on Jan, 8 2016 @ 08:24 PM
link
While there is no Quranic verse on punishment for apostasy, there is plenty of Hadith that do call for it.

Personally, I think it's not only barbaric, but asinine.

I mean, what if an apostate changed their mind later in life?

Some apostasy punished by violence is usually followed by a call to war against Islam, that's when it becomes justified to punish so to speak.

But I doubt this lady was going to war with Islam.
Just speaking out about ISIS.


Egg on their face come Judgement Day... & hopefully a Reaper drone up their arses.
She is the definition of a Jihad Martyr.

I just saw this saddening news on Dailymail.

She wanted to escape with her son and tried to convince him.... Apparently he gave her up and when she was found guilty of apostasy, her own son murdered her with his ak rifle... What a sickening individual...

This is what way too many people don't want to understand. Meanwhile not all Muslims are bad people, there is a large influx of radical Muslims who are entering Europe, and the U.S. under the guise of "escaping the Syrian war", when most of them are not even Syrian.

Then these same people who want to ignore the facts wonder why there are so many murders in the name of Islam by radicals, or they simply want to ignore these barbarous acts, and claim this will not happen in the U.S. or Europe...
edit on 8-1-2016 by ElectricUniverse because: add and correct comment.

posted on Jan, 8 2016 @ 09:08 PM
link
Thousands of Syrian families are starving to death, apparently only the healthy well fed men migrated, this will break your heart.


Then these same people who want to ignore the facts wonder why there are so many murders in the name of Islam by radicals, or they simply want to ignore these barbarous acts, and claim this will not happen in the U.S. or Europe..


C'mon Electric no one is ignoring anything people are saying lets not turn our backs it's part of our ideal of "Give me your tired, your poor, Your huddled masses yearning to breathe free, The wretched refuse of your teeming shore. Send these, the homeless, tempest-tost to me I lift my lamp beside the golden door!"
Can the above come back and bite us in the ass at times?? yes there are no guarantee that it won't but prudence and a watchful eye can keep us safer not absolutely safe, if we are going to claim exceptionalism then the above is one of those ideals that defines us so.

posted on Jan, 8 2016 @ 09:48 PM
link
What i find odd is that we know everything about Isis,every single detail yet we cant defeat them even when 4-5 of the greatest military powers are bombing them ?

We know who killed who,how many gays they throw of buildings,how women are treated in Raqqa,we know exactly the names of women Isis uses as sex slaves.

Isis was infiltrated from the begining it seems,so we know when a terrorist farts in Raqqa but cant defeat them ? Lol. What a load of horse #.

originally posted by: ErrorErrorError
What i find odd is that we know everything about Isis,every single detail yet we cant defeat them even when 4-5 of the greatest military powers are bombing them ?
.

It's not working because we need boots on the ground.

Just using bombers is like boiling water but not putting tea in it.

A cup of tea needs all its ingredients to work and so does an honest campaign to stop ISIS.

Bombs send them fleeing, but they just return once the planes have left. An advancing army following the bombs on the other hand would mow down the rats as they abandon ship.

I took you seriously because it's not the first time you've expressed the same sentiment here.


But there are a LOT of the people in ISIS controlled areas who are open supporters of what they are doing.

posted on Jan, 9 2016 @ 08:25 AM
link
Saudi Arabia bedheads people for apostasy and they're our example of "Moderate" allies. Such a wonderful and peaceful religion

originally posted by: EightTF3
Saudi Arabia bedheads people for apostasy and they're our example of "Moderate" allies. Such a wonderful and peaceful religion


Senegal have like 95% Muslim population, have allowed Christian Churches one of the largest in Africa if not the globe from government expense..ie mostly Muslim tax dollars, one of it's Presidents is a Christian married to A Christian European woman as first lady voted in by majority Muslims, the problem was never with Islam per say but folks with a fundamentalist creed, we have in the west in America land of the free home of the brave , Christians, who if they got ultimate power today would exterminate all gays and sodomites along with so-called blasphemers, and their Constitution would be based largely on the laws of Moses.
edit on 9-1-2016 by Spider879 because: (no reason given)