posted on Jan, 8 2016 @ 02:40 PM
link
Not to be outdone by Northrop, Lockheed put out a promotional video today highlighting some of their achievements for 2015. In it they mention all the F-35's, C-130's and C-5's they built, the U2's 60th anniversary as well as some of the philanthropic work the company does around the nation.
All that aside though, at 3:37 they show a planform for their hypersonic boost glide vehicle that I hadn't seen before. This one with downward facing wings that I thought rather interesting looking. 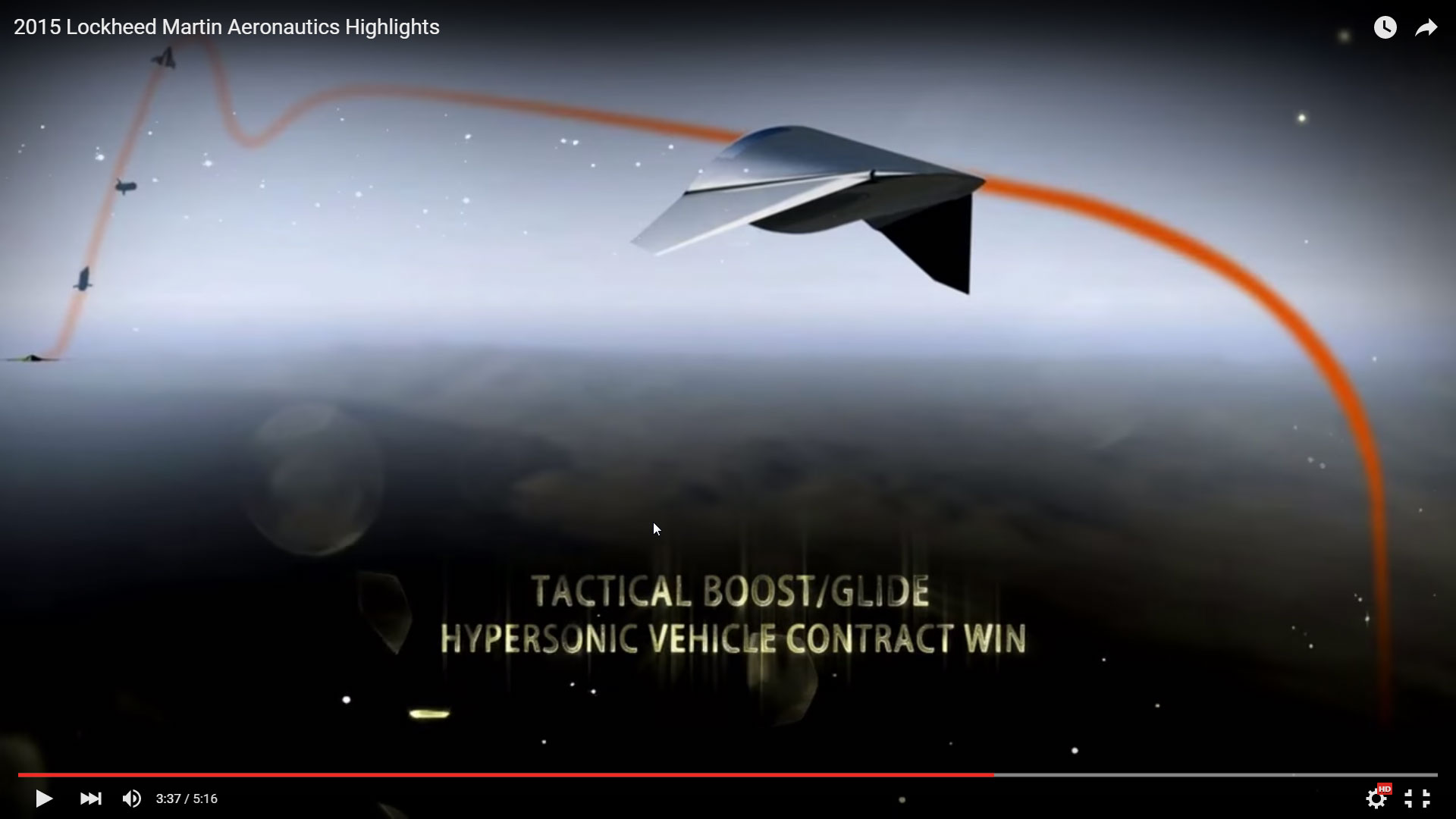 
Is that something launching it or do the wings change geometry/orientation.. That's a good one to look into, is it a UAV or is it a standoff weapon?

It's a boost glide weapon. It's launched on a theater range ballistic missile, that gets it up to speed, then it separates from the missile and glides to the target at hypersonic speeds.

they actually have a plant near me..... i keep checking for jobs...

although I would probably get myself in trouble, by keep asking "Where is the juicy stuff"

posted on Jan, 9 2016 @ 04:51 PM
link
a reply to: Zaphod58
Look at the picture of the boost glide its launching by an airplane on the picture not a balistic missile

No aircraft can get a hypersonic boost glide weapon fast enough. It launches from a missile booster. They eventually want to get it small enough for an aircraft launched missile but they're not close yet.

Speaking to reporters at the annual Air Force Association conference in National Harbor, MD, last week, the head of the Air Force Research Laboratory said both programs present their own technical challenges: The air vehicle for the TBG concept is a warhead design that separates from a booster rocket and glides to hypersonic speeds, up to Mach 10 or greater, whereas the scramjet-powered system would be slightly slower but more complex to build and operate.

posted on Jan, 9 2016 @ 06:42 PM
link
a reply to: Zaphod58
Yes I agree but in the tactical boost glide program there is an option for an air launched glider, surely air launched with the booster and the glider like the picture of Lockheed. extract of the article "According to the TBG broad agency announcement, released March 25, the program aims to develop and demonstrate technologies that would enable air-launched, tactical-range hypersonic boost-glide systems. The program culminates in a flight demonstration, which Air Force officials expect to occur sometime over the next five years."

An air launched booster would require an ALCM sized booster, or a Pegasus missile, meaning a B-52.

They say a lot of things are only a few years away and we still haven't seen most of them.

originally posted by: Zaphod58
a reply to: Caughtlurking

It's a boost glide weapon. It's launched on a theater range ballistic missile, that gets it up to speed, then it separates from the missile and glides to the target at hypersonic speeds.

What would be the point of such a weapon? It was my understanding that the normal payload reentry vehicles are already stupid fast, are thoroughly proven technology and certainly a lot cheaper than this thing...

They're designed for other missions besides straight missile like an ICBM. They can be used for antiship weapons, or just about anything else, with conventional warheads.

They're almost impossible to stop with existing technology, and in the antiship role don't even really need a warhead, as the straight kinetic impact will do a lot of damage.

Again, why this instead of a guided ballistic warhead with proven technology?
edit on 11-1-2016 by mbkennel because: (no reason given)

Why? Seems like it's harder---you already need a ballistic missile to launch and now you need high-speed dynamic hypersonic guidance with friction, as opposed to precision ballistic dynamics in frictionless space which is hard enough.

, less likely to be mistaken for a larger attack than a ballistic missile,

more flexibility than a ballistic missile,


more platforms to launch from, more just about everything than a ballistic missile.

How? How? The launch stage is a ballistic missile of a certain size.

There's conservation of energy. If you want to get from A to B, it's hard to see how a trajectory with more friction is going to get you further than one with less. It isn't airbreathing and saving oxidizer mass.

You know what? You're right. It's another useless weapon to waste money on. Ballistic missiles and subs all around!

I think it is about having a higher range (better lift to drag ratio) and maneuverability (less predictable flight path).

posted on Jan, 12 2016 @ 06:46 AM
link
I don't think it's a waste of money it can become a big devastating weapon for the LRS-B with an air laucnhed version, the impact of a mach 8 warhead on an objective is like receive a meteor in the face for the ennemy with no chance to stop it.

if it were me, I'd put it on something faster than the lrsb. blitzkrieg Chinese naval fleets in the yellow sea.

also notice they are trying to beat the, what is it, 9 minute mark? for hypersonic that makes the most sense, to me, if you intend for whatever it is to go hypersonic at low altitudes. New skins for hypersonic missiles? pushing the 9 minute mark to give it a farther standoff range when launched....from something faster than the lrsb????

posted on Jan, 12 2016 @ 09:12 AM
link
a reply to: BASSPLYR
Great, same thing with the mobile launcher, 9 minute of flight of a hypersonic glider give a ratio of more of 700 miles for the weapon, and 9 minute is a very short time to response. Same range of cruise missile but very fast surely difficult to shoot. In the same time the very high altitude profile of the hypersonic glider give it immune to air defense.

with the 9 minute mark I calculate you can launch from 690.3 miles away. for every minute of time you can keep the weapons atmospheric integrity together add 76.7 miles further out you can launch. couple that with something really fast, relatively stealthy and unpredictable that's some serious blitzkrieg right there.

posted on Jan, 12 2016 @ 09:46 AM
link
a reply to: BASSPLYR
For my opinion this type of weapon must be a priority, so since the X-51 last flight where is the hypersonic new demonstrator for the Air force, last year i read a new program and a demonstrator ready for 2023 ?