posted on Jan, 7 2016 @ 02:22 PM
link
I experiment a lot lately, with meditation, tarot and remote writing. It could be phantasy. But today, i got a pretty piece as i was asking who it is i am talking to, when i "pray". I just took some more private parts out, but the rest is for those interested:

There will be an UFO Fleet, don't be so impatient. Many will die. Some will be saved.
He is right you know, there is no god. But there are archons, home to Earth. There once was one who wanted to gain power and made men call him the only god. But he is dead now. That's right, archons die too. He is human now. The story is always the same, Isis an Osiris, Adam and Eve it all goes back to Marduk and Ishtar: " Let my people dance!"
It is a flow of things, a circle and waves, it comes and goes, maniphests, vaporises, games humanists play.

The souls dance between 9 "species". That's right only nine throughout the entire universe. The flow knows no boundries. Just some are younger, some are older, the spiritual evolution takes time. So don't let your guards down! Not all are in touch with the flowing force. Just as humans the younger ones still need to learn.

Love. That's where the gnostics got the unification of the male and female force from. Find your soulmate. The connection opens your heart to the flow. The most important lessons are learned through love.

posted on Jan, 7 2016 @ 03:19 PM
link
Do you think what your mystical pondering may be similar to what Bungie is pondering as well in their game of Destiny?


The Nine (often represented as the IX) are the enigmatic rulers of the Jovians, the worlds beyond the Solar System's asteroid belt. They maintain contact with the City via their agent Xûr,and have formed an alliance with the Reef.

After the apparent release of Skolas, their loyalty is in doubt.

Very little about the Nine or the Jovians is known due to the isolation of the outer Solar System. One legend describes the Nine but offers seemingly contradictory clues to their nature:

The Nine are survivors of the cis-Jovian colonies who made a compact with an alien force to ensure their own survival.
The Nine are deep-orbit warminds who weathered the Collapse in hardened stealth platforms.
The Nine are ancient leviathan intelligences from the seas of Europa or the hydrocarbon pits of Titan.
The Nine arrived in a mysterious transmission from the direction of the Corona-Borealis supercluster.
The Nine are the firstborn Awoken and their minds now race down the field lines of the Jupiter-Io flux tube.
The Nine are Ghosts who pierced the Deep Black without a ship and meditated on the hissing silence of the heliopause.
The Nine are the aspects of the Darkness, broken by the Traveler's rebuke, working to destroy us from within.
The Nine is a viral language of pure meaning.
The Nine are the shadows left by the annihilation of a transcendent shape, burned into the weft of what is.
Osiris had met with the Nine on Europa. According to Brother Vance, "He says the Nine are vulnerable every moment they touch our world."

And the mysterious Xur is the one who represents the Nine at Tower and Reef socials... 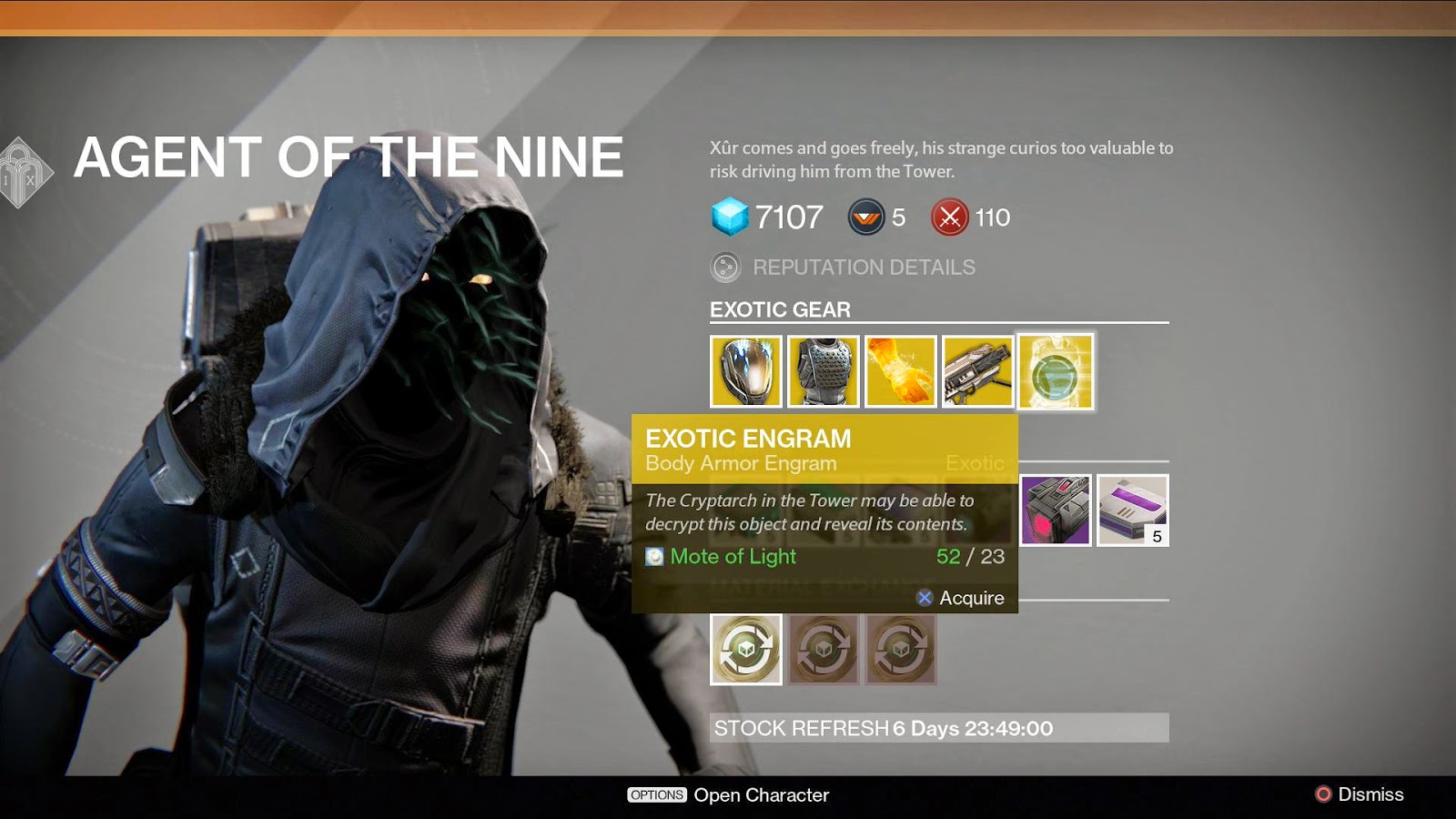 Xûr, Agent of the Nine[1] is a vendor who appears in the Tower and the Vestian Outpost.[2] Xûr sells extremely rare goods in exchange for Strange Coins and only appears on weekends.[1]Xur's coming and going depends on the planetary alignments, as he hails from the Jovians, a part of the system that the Guardians have yet to adequately explore. He is in service to the Nine, enigmatic rulers of the Jovians.

The Destiny tie-in is interesting. I know David Wilcock is considered a kook here by most but check out this article about the Cabal and Mars.

The Council of the Nine

The Nine. Andrija Puharich. That's what and who came to mind for me when I read your title but before reading your post.

originally posted by: Blarneystoner
a reply to: Peeple

The Council of the Nine

I agree with you and tweetie. My first thought....especially saying 'the 9 are one'. They were supposed to be the Ennead. Funny, Just yesterday I felt compelled to reread part of 'The Stargate Conspiracy' and that was one of the things I specifically recall rereading.

posted on Jan, 7 2016 @ 06:50 PM
link
Don't Buddhists believe we have had nine bodhisattva's and await the tenth? Any number multiplied by nine's sum will give you nine if you add the resultant digits. Perhaps there is something to these fictional constructs we have named numbers?

"If you only knew the magnificence of the 3, 6, and 9, then you would have a key to the universe." ~ Nikola Tesla

Just crazy mumbojumbo talk, or did he discover "a key"?

The cosmology of Norse mythology has "nine homeworlds". That came to mind first when reading your post.

Oh cool. Thanks for the link!

According to Jay Weidner - Called by Wired Magazine an "authority on the hermetic and alchemical traditions," and "erudite conspiracy hunter," Jay Weidner is a renowned author, filmmaker and hermetic scholar.

Archons - "Gnostics preached that there was an invasion that occurred about 3,600 BC and, about 1,600 years before the Nag Hammadi texts were buried, they wrote that this invasion was like a virus and, in fact, they were hard pressed to describe it.... The beings that were invading were called Archons. The Gnostics thought that Jehovah was an alien, off planet, demon and that he was a fake god." - Jay Weidner

Yes, i read that too. Also tried a few of the nag hammadi gospels, they are mostly creation myths.
But as i understood it, the archons are home to earth, the aborted children of the creation. Which means the ones who didn't get to be born in flesh and blood.
I don't think it really literally says alien? Well at least not what i read.
But alien=strange so it is true either way.

originally posted by: Peeple
The souls dance between 9 "species".


That is not good because 9 is the devil's number when it comes down to ego.

No matter what you with 9; multiple, power, square; the digits always simplify back to 9 like the ego always feeds itself.

originally posted by: Peeple
a reply to: Blarneystoner

Oh cool. Thanks for the link!

Please don't throw the babe out with the bath water!

I don't know if it's on the Internet somewhere but my long time understanding of The Nine is they were nine benevolent computer programs installed off-planet eons ago to monitor and guide earth and humanity when humanity began incarnating on planet. The human race was supposed to gradually advance along a general path.

Of course, I would say now everything has been hacked at some point but I've often wondered where The Nine "are" and if they are still viable as an entity of sorts or were destroyed or neutralized.

a reply to: tweetie

I never heard that before and couldn't find anything. But also interesting.

I think someone has been playing far too much Destiny ..... I would know as I play it excessively
The nine ( xur) , Ishtar ( Ishtar sink ), archon ( archon priest ) etc etc.

And i swear i never played destiny, heard that the first time here from the first comment after my post.
But why not, right? modern fiction is just as much part of our culture as older texts, like uhm the bible...

In general i am a bit worried how powerfull the old book still is to some. Aliens are demons? That's crap to create fear.
Maybe we all should play more mass effect, destiny and Fallout!