NYPD cop: "I was punished for not stopping enough black, Hispanic teens in subways"


So thinking one will get caught acts as detterent. amazing.

Would be interesting to see the data before these policies were enacted.


Also Why is it that "the system" is racist in this situation? Exposing this exact thing in say Alabama would result in blaming the people of Alabama and their Culture. Are New Yorkers above reproach?

Intersting to see the change in perception to say the least.

If it makes you feel better, I CERTAINLY think that the cop's supervisor is racist.

But logic tells us unless people complained there is no way his supervisor knows who he stopped.

Arrest and ticket records? Wouldn't they also tell us that?

originally posted by: introvert
a reply to: dragonridr

But logic tells us unless people complained there is no way his supervisor knows who he stopped.

Arrest and ticket records? Wouldn't they also tell us that?

No since if he was only arresting whites and ticketing only whites then there is an obvious problem. In thr article it said stops most of these people go on without either. The only way the supervisor would know was he started getting lots of complaints. You assume every stop leads to an arrest or ticket? Most do not most of the time subway officers ask you some questions and you move along. If it was brought to the supervisors attention then most likely there was a reason for it.

Trust me like all police supervisors they don't want to spend the time correcting non problems.

It's not racist, they are criminally profiling people! Think of all of the guns and violence that stop and frisk prevented.

Edit: Dear (nonexistant) God, i was being sarcastic and i actually got a star for that post.
edit on 7-1-2016 by cenpuppie because: (no reason given)

posted on Jan, 7 2016 @ 11:50 AM
link
I honestly believe it. I'd find it a lot more believable in a place like Alabama to, it's kind of shocking but a bit refreshing that people are coming out about this now. Just wish some of this came out earlier, but better late than never I suppose.

There are more of these guys speaking out lets hope the Blue wall of silence brakes.

People think this kinda of stuff ain't real or is somehow deserved.

But no matter what!! you will find folks in this thread wiling to justify or make excuses for them.
edit on 7-1-2016 by Spider879 because: (no reason given)

Well, if that is correct it shall come-out in the court proceedings. Regardless, the evidence against his supervisors appears to be pretty damning.

This will be interesting to say the least.

Combine that with the information uncovered about the Ferguson courts and police, this makes for a nice picture of how things really are.

Rather than how folks think they are.

That is subjective. And impossible to know. Not all crimes are reported and then uploaded to national database though the feds collection will give you a "in the ball park figure" for some things but not all.

There is a strong correlation between crime and poverty, however correlation isnt causation. There is a big difference between commiting a crime and going to jail for the crime. For example, black folks use drugs at the same rate as their white counterparts and yet have a higher probability of going to prison. Both commit the same "crime" yet the demographics of the prison population in regards to drug offenses do not reflect this.

Great question though. If you want something to chew on, take a look at how much the prison population exploded once it the law process was privatized.

Bs they run demographics on all the crimes don't even give me that cop out response.

The fallacy in that approach is that the statistics may be skewed due to systemic racism and focusing on minorities.

posted on Jan, 7 2016 @ 03:28 PM
link
a reply to: onequestion
What he states is true. Especially the privatised prison system. Judges are on commission to fill the prisons. Who will they most likely target? White criminals who can afford representation or black criminals who can't living in poverty areas?

posted on Jan, 7 2016 @ 03:43 PM
link
It is safe to assume that Police base some of their work on statistics, statistics which are gathered from former legitimate crimes and/or arrests. As a NYC daily Subway rider it is blatantly obvious to me that the majority of crimes are committed by young Black and Hispanic Male's.
From an employer's point of view, if you're assignment is to do X, and you are consistently unsuccessful at X, I am forced (either by TPTB, protocol, or plain-ol "human nature") to assign you to the... less desirable task.
"Why the less desirable?" you ask. Because it would be unfair to assign my "top performers."

I'm thinking this is a go along to get along system. I don't know who is at the top, and this person may have just acted on some data from a statistician.

It seems to be the result they were looking for. They may have just not thought that whites would realize this and become more opportunistic at getting away with a crime.

Can't wait for someone to come into the thread and tell us that the system isn't racist.

I saw this picture online that perfectly sums up their argument. 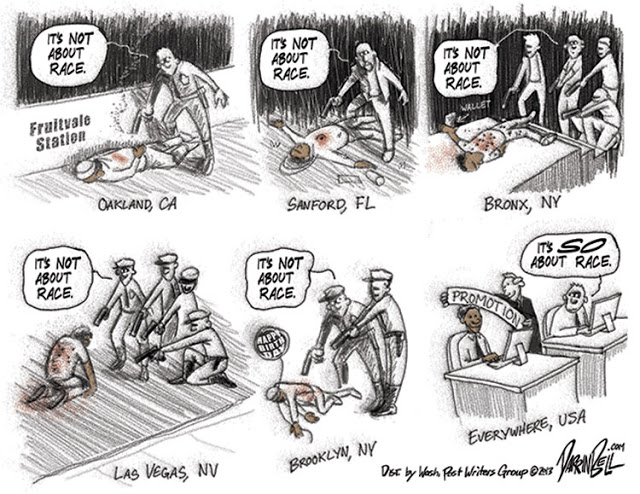 I remember seeing something about this case last year. If I'm not mistaken, he made a huge amount of recordings that go even deeper than just this. Not sure if I have the time or desire to look up the original articles about it, though.

It's impossible to know, first off, simply because not everyone that commits a crime gets caught.

The fallacy in that approach is that the statistics may be skewed due to systemic racism and focusing on minorities.


And by which crimes they're talking about. As an example, theft, embezzlement, identity theft, fraud, joyriding, grand theft auto, robbery, armed robbery, and shoplifting are all different forms of stealing. But they conveniently divide "stealing" into various labels and then pick the ones whose demographics fit their argument. But if they compiled them all as "stealing", the demographics of the average perpetrators would be vastly different.

Note, that only includes cases that are labeled by those terms. If a domestic violence case is labeled domestic violence, it doesn't count as a "violent crime". But if that particular case qualifies as "aggravated assault" then it's counted as a "violent crime". And clearly things like "wars & civilian deaths in war" don't count either, otherwise the demographics would be skewed even more.

posted on Jan, 7 2016 @ 04:22 PM
link
It looks like Birch, the cop who was punished by his superiors for stopping too many women and whites, simply wasn't seeing many black/hispanic teens committing the crimes. So either Birch just got "unlucky" and didn't see what was normal or the supervisors are trying to force a ist/ism impulse on something which doesn't conform to their "statistics".

(Almost 50% of the stops were women, not black/hispanic teens.)


Birch, a 16-year veteran of the force, insisted he was not targeting any specific group and simply stopped whoever he observed committing fare evasion.

“If these people (black and Hispanic teens) are not jumping over turnstiles, what am I going to do?” he argued.