South Korea to resume propaganda broadcasts to North over test


South Korea is to resume propaganda broadcasts into North Korea in response to Pyongyang's claims to have successfully tested a hydrogen bomb.
Seoul said the broadcasts would restart on Friday at noon - a move that is likely to irritate North Korea.
Although there is scepticism that North Korea carried out the H-bomb test it claims, its actions have been condemned by the international community.
The UN has agreed to draw up new measures against North Korea.
Earlier, the US said President Barack Obama had spoken with the leaders of South Korea and Japan and "agreed to work together to forge a united and strong international response to North Korea's reckless behaviour".

More unnecessary provocation will only make the situation worse , the only country with the ability to deal with the South is China and signs are they are loosing patients with the regime.

Agreed. It seems as though the waters are more than shakey. Japan is not in favor of all the silliness and I am curious what direction they will take.

Eventual;y a child does something so bad that dads takes him out behind the shed.

Hell let china invade to stabilize. All I see is a catastrophe in the making by allowing the north korean government to continue down this road.
edit on 7-1-2016 by Xcathdra because: (no reason given)


More unnecessary provocation will only make the situation worse , the only country with the ability to deal with the South is China and signs are they are loosing patients with the regime.

I agree. I would rather like to see the U.S. have behind the scenes talks with China about eliminating the current North Korea regime. As you said, China's patience with North Korea is running thin. This should be acted upon by everyone who is concerned about this threat, not just our allies. We need to start communicating with our enemies and realize we have a common threat and a need to eliminate this out of control regime.

originally posted by: WeRpeons
a reply to: gortex
We need to start communicating with our enemies and realize we have a common threat and a need to eliminate this out of control regime.


I totally agree, the US/UK/SA have been totally out of control for the past 35 years, and they need to be taken care of before the world goes boom boom.

Work with China to remove the N. Korean government and in the end reunite the north under Seoul and use the Chinese position and restrict US / UN forces to to the current DMZ line.

Also with no N. Korea the need to keep foreign troops at their current levels in S. Korea could be drawn down.


ETA -
Chinese media reporting S. Korea raised their alert level along the areas with loudspeakers. Apparently it looks like turning them back on is imminent.
edit on 7-1-2016 by Xcathdra because: (no reason given)


North Korean State media-
www.kcna.kp
edit on 7-1-2016 by Xcathdra because: (no reason given)

originally posted by: Xcathdra
Eventual;y a child does something so bad that dads takes him out behind the shed.

And what ? Kills him ? Doesn't seem like a very good dad

Has the Middle East taught us nothing about taking down "dictators" ?

Whoops his ass and tells him not to do it again.

As for dictators I have a different view. In this case this dictator has threatened the US and S. Korea. If dictators don't want the US to end them then don't threaten us or our allies.

I was reading about that as well. The loudspeakers just crack me up; that is so 70's (reminds me of an episode of Gilligan's Island for some reason)

Have you seen images of N. Korea... They look like a photograph of the 1950's. In this instance 1970's loudspeakers trump the Norths 1950s mindset.

The question is how long can NK be dealt with in the current form? Constantly threatening to reign down nuclear Armageddon on S. Korea....

The other thing to remember is whichever side starts hostilities neither side can be blamed for it. There never was an official end to the Korean war, just a cease fire. Both sides still remain at war with each other. 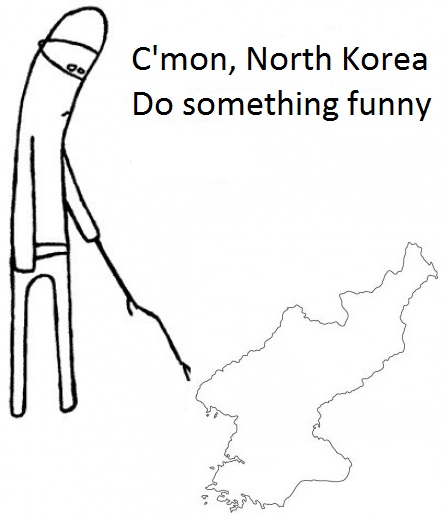 posted on Jan, 7 2016 @ 10:48 AM
link
Lol we invaded Iraq and over threw a dictator regime with less evidence that turned out to be made up, yet these fools claim to be testing hydrogen bombs and act afool and no one does nothing. I think that fat little ****er and all his loyalists needs to either spend time in getmo or be handed to China for exile or worse. Then the common people need to decide what kind of government they want and build allies and become a nation in the world community. It is the people that are suffering not their government with that fat idiot in charge.

And then this:
S. Korea, U.S. deploy B-52 strategic bomber over Korean Peninsula

. . . Remember these 2 entities never ceased a state of war. But the United States could've taken a softer approach besides the standard Aggressive provocative armament of S.Korea. What sovereign country would feel "safe" after witnessing Iraq, Syria & Libya?

However, there are no signs any testing is imminent, it said.

"While there are no indications that a nuclear test is imminent, the new tunnel adds to North Korea's ability to conduct additional detonations at Punggye-ri over the coming years if it chooses to do so," it said.

Has anyone ever thought that N.Korea has been preparing for a nuclear exchange? Hardening against EMP bursts?

Simply look at who's being provocative - - It's not like N.Korea is inviting China or Russia or Iran or Pakistan or Any other nation to arm them w/ drones, nuclear capable delivery aircraft, aircraft carriers, foreign troops stationed & intel services galore within their country.
edit on 10-1-2016 by SurrenderingIsBack because: (no reason given)

Or N. Korea can stop threatening S. Korea and the US while working on a nuke program that they threaten to use.

posted on Jan, 9 2016 @ 11:54 PM
link
If it wasn't for Slick Willy Bill Clinton enabling N.Korea to have a Nuclear Program - - we wouldn't be having this discussion.

Alas, who has a foreign military bases on the Korean peninsula?

Talk about Over-Kill of military hardware, logistics, intel, & complete hand up S.Korean arse, which United States is DICTATING through.

. . . Again, explain how a sovereign country would view the hostile military build-up off their borders while witnessing the United States hand in destabilizing Iraq, Syria, Libya, S.China Sea, plethora of events?

N.korea having a nuclear deterrence IS THE ONLY THING SAVING THEM FROM INVASION!
edit on 9-1-2016 by SurrenderingIsBack because: logic

Yes and it has nothing to do with how bad N. Korea's infrastructure is.

The military first policy is a large chunk of the problem with the remainder falling in the idiots who run the country.

N. Korea embarked on its nuke program all on their own. They then withdrew from the UN nuke agreements. N. Korea is responsible for the mess they are in and they got their all on their own without US assistance.