Hillary Clinton says aliens may have paid us a visit

posted on Jan, 5 2016 @ 02:56 PM
link
This is well. Interesting. I know that Hilary Clinton already spoke about aliens in the past, but still odd. So here's the deal:

Technically Incorrect: In a playful end to an otherwise serious editorial board meeting, the presidential hopeful talks UFOs, promising to investigate Area 51 if elected. If you thought the presidential campaign was already slightly extraterrestrial, it just became even more so. 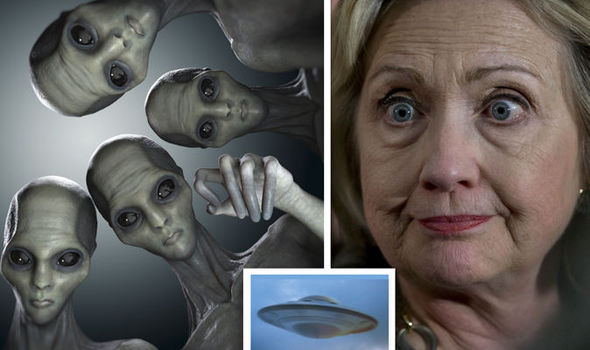 Democratic presidential candidate Hillary Clinton intends to sort out the issue of whether aliens exist once and for all.

Clinton was interviewed late last month by the editorial board of the influential (in New Hampshire) Conway Daily Sun. After answering questions on foreign policy and the economy, she was reminded of a conversation she had with the reporter in 2007 about UFOs. The reporter also brought up how her husband -- former president Bill Clinton -- mused in April to Jimmy Kimmel that he "wouldn't be surprised" if aliens had wandered down here and checked us out.

Hillary Clinton rather agreed. Having fun with the reporter, she said. "I think we may have been (visited already). We don't know for sure," she said. But what will she do about it? It's all very well that politicians whet our appetites, but we need to know. We've watched far too many TV shows that assume aliens exist, and frankly it's killing us.

Thankfully, Clinton says that if she's elected she would "get to the bottom of it."

In this, she's being encouraged by John Podesta, her campaign chairman and a vast enthusiast of alien theories.

"He has made me personally pledge we are going to get the information out. One way or another," she told the Sun. "Maybe we could have, like, a task force to go to Area 51." (Area 51 is a US Air Force facility in southern Nevada where evidence of alien life is allegedly hidden.)

What do you think about this? I personally believe that aliens visit us, but i don't think area 51 holds any sort of alien technology on their hands.

Hill-dog can't get to the bottom of anything but a can of Pringols.
She would probably just tell everyone in the US that a (Sci-Fi)video is to blame and there is no alien life at area 51
I hope the media has a field day with these shenanigans. There is more important things to worry about this election cycle.

Just out of curiosity, do you ever post anything at all that's not condescending? Seriously?