posted on Jan, 1 2016 @ 07:16 PM
link
Well, I guess they're getting desperate. It appears the ad is looking for some people to disrupt a Trump rally (Chicago or Austin??)

My guess would be for the actors to shout racist slogans, maybe like "white power" or something of that nature, to make it look like Trump supporters were racist.

The ad was posted about 4 hours ago, I'm including screenshots as it will probably be removed.

It would be awesome if an ATS'er in Austin could reply to the ad and report back here.

It speaks for itself-

IF... (a) the thought of one of the LEADING CANDIDATES for PRESIDENT OF THE UNITED STATES being temporarily humiliated on an international scale by the flawless execution of an Onion-class stunt (that poses no threat of injury to anyone with an ego smaller than Oregon and is totally legal) brings a smile to your face, and, (b), if being part of the anonymous team of talented, creative, rational, intelligent, non-fear-mongering and educated media industry professionals or qualified entbusiasts proficient in Photoshop, After Effects, any 3D modeling tools, HTML, web design, copywriting or any combination thereof by dedicating a couple hours to help perpetrate the stunt appeals to you... I'd love to hear from you sooner than later.

PS - the anonymous part matters. I am a producer with a professional reputation and, at least in the short run, will not benefit from any association with this brainstorm, other than the "just got bumped to first class on flight to Autralia and champagne-toasting Jennifer Anniston sitting next to me #holy#ing#!!" joy it will provide - only for much longer than that flight.

More importantly, if it works - and all things considered it's simple enough that it should - it can easily be repeated (at least 5 times by my estimate) with increasing veracity and afford mentioned joy.

So the further beneath the radar the better. 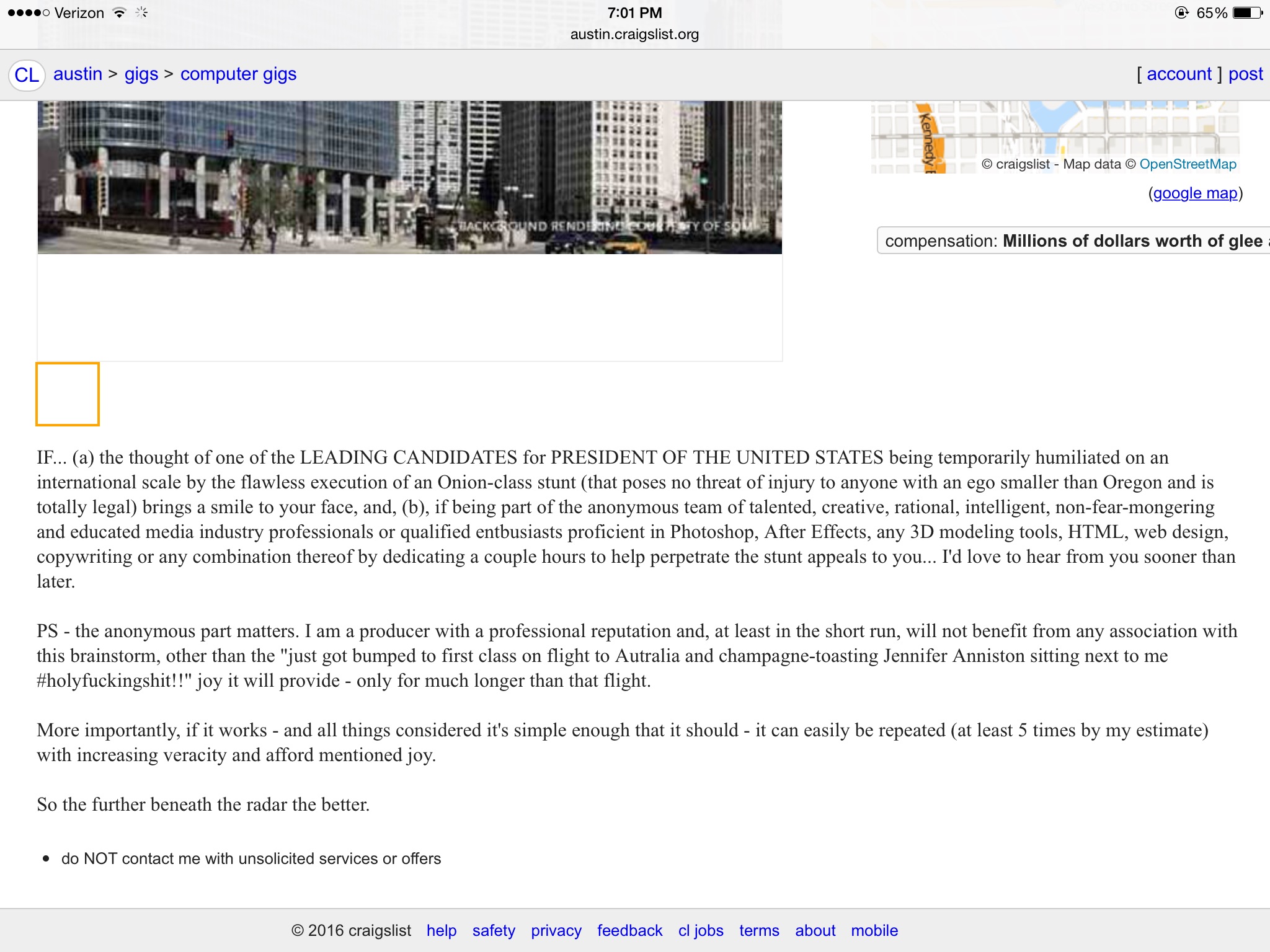 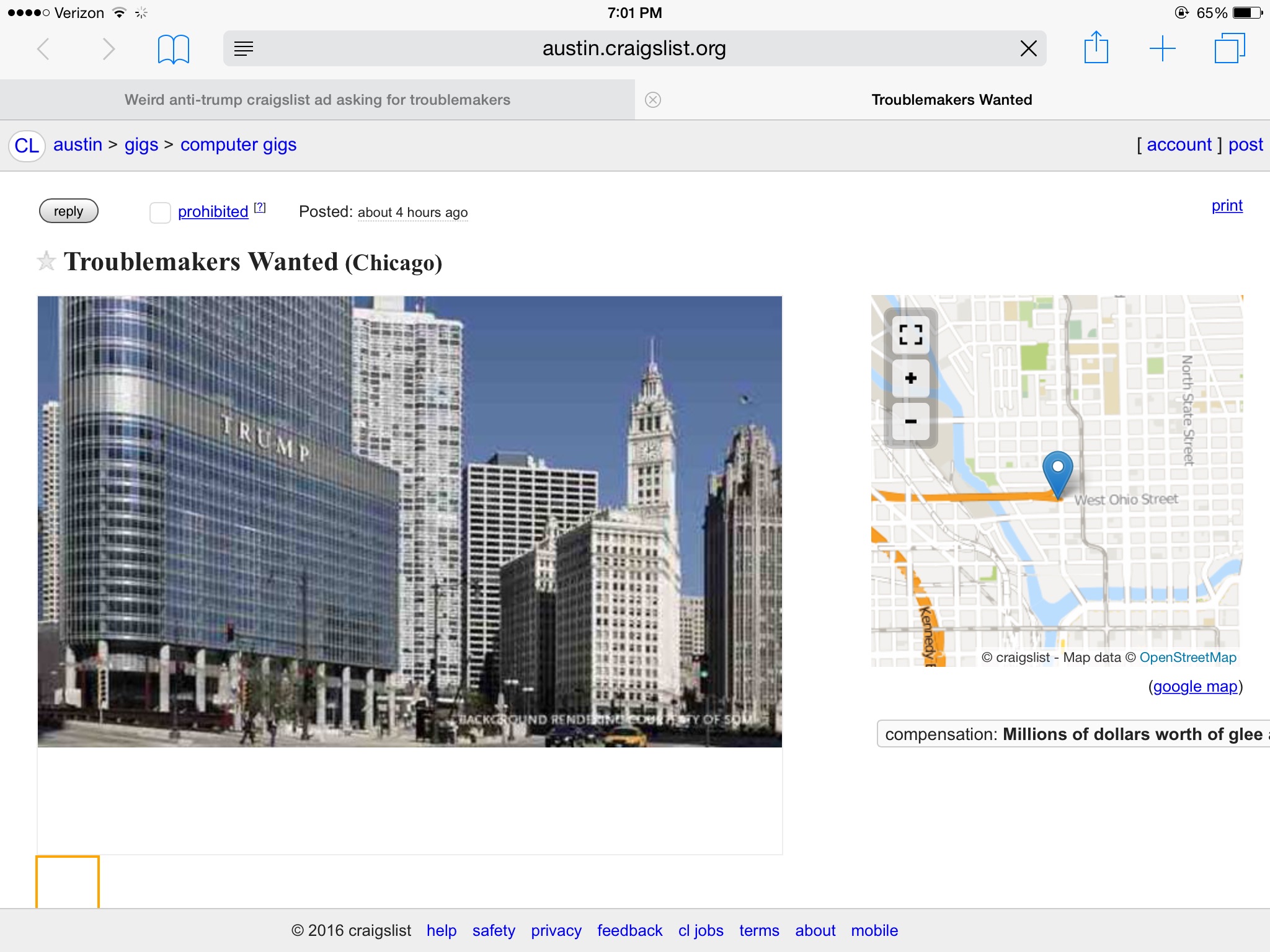 Someone pleeeeease reply to the posting and see what they want done. I would LOVE to know what kind of hijinks they have in store.
What dumb asses though. Not that I really am one, but did they really think that no Trump supporters would see it? They're going to get trolled too!

If anonymity is important for some professional's reputation then that seem funky and someone will be on it.

Yes, that would be an interesting twist.

I thought by now someone would have suggested "the fat man" being involved, seeing how it is Austin. I'm sure he'll be all over the story tomorrow. (I am not suggesting that is the case).

Sounds like someone is trying to incite violence and film it for profit. I think that person may have an unexpected visit coming to them soon.

Yes, I'll bet the Secret Service may dig into that.

It would be sad if they read it here first, LoL.

posted on Jan, 2 2016 @ 10:25 AM
link
I think the new " screaming crazy people" at a rally should be arrested. No matter if its Hillarys, Trumps or anyone elses. They are free to have their own voice heard in their own space, its violating all of our rights . I hope Trump wins.

posted on Jan, 2 2016 @ 10:35 AM
link
When the crazy girl jumped on stage and disrupted Bernie Sanders I knew then that there would be a trend of idiots doing stuff like that and for her to do it to Bernie of all people was just idiotic, he is her best friend. I posted a thread yesterday about the merits and accomplishments of Trump vs Hilary, no one responded because Hilary has no accomplishments.

I'm willing to bet this was just someone trolling.
edit on 2-1-2016 by introvert because: (no reason given)

originally posted by: introvert
It's craigslist. People post all sorts of things.


originally posted by: introvert
It's craigslist. People post all sorts of things.

What hate crimes have been staged by left wingers?

Well, I'd say this is officially a troll of "onion-like" proportions.

Could be trolling, could be the real thing, who knows. I wouldn't put it past either side of the false left/right paradigm.

just ask yourself - who gains the most benefit from a public ad stating :


originally posted by: introvert
It's craigslist. People post all sorts of things.

What hate crimes have been staged by left wingers?

There were several at various universities these last few months and now this. It makes me wonder just how many of these are completely staged but are never found out.

posted on Jan, 3 2016 @ 01:37 PM
link
Sorry OP but in this day and age we won't fall for these lame red herrings. Anyone - including Trump supporters - could have put that ad there in order to generate scandal. Anyone who really wanted to cause a disruption at a Trump rally isn't going to openly advertise it.

Here is how to troll the media:
1. place ad on CL about looking for 'troublemakers' to disrupt a candidates rally.
2. Go to rally, make a tiny scene in front of your camera operator.
3. Leak the video, and point out the CL ad.
4. Cash in on the outrage.

Really, it's pathetic. So is giving these people even the slightest attention.

I think you are giving those reponsible too much credit, maybe they are not that smart.

Reporting this type of nonsense is the only way to stop it, whether it be contrived or genuine.

posted on Jan, 3 2016 @ 10:36 PM
link
Sounds like something the Clinton campaign would do, its dirty politics season and I can't wait to watch the mud fling from everywhere.