You Have Four Personal Options As to Who Will Become President

I don't think the electorate plays any part in who gets chosen.

I never vote FOR anyone just against the fascist.
However I might vote for Bernie....But I have no illusions that I have a "choice" in the matter.

i bet you thought the same thing about Paul .

how brainwashed can your get?

This ball has been rolling for decades. From early in the 20th century --- even since the founding of this country!!!
The ideas are introduced (and perpetually reintroduced) slowly and cautiously, to see how the public responds. It's been 50 years since JFK was 'destroyed.' Longer than that for putting hurting Americans to work (Civilian Conservation Corps, for example).........

The ideas don't ever just stop or fade away. They remain. Some may call them "intractable." I call them inherently necessary. I applaud the brave people who work their way into the system and then start pushing Social Justice. Might not get 'notable' (notable-enough) traction this year - but next time that same built-up traction will have "stuck the landing" better than this time around.

Never give up the good fight.

posted on Jan, 1 2016 @ 06:16 PM
link
Most agree that the two major party choices are less than desirable.
So, why do most still "hold their nose" and vote for the "lesser of evils"????
Why can they not turn to the hundreds of other candidates running and find someone who best represents their views but doesn't represent their affiliation? If the goal is to make the country a better place and one honestly feels that the two major parties are no longer capable of doing that---why continue to encourage them by giving them your vote?
That is as silly as saying the corporate empires are evil and yet still purchasing their product on a daily basis.
Doing the same thing over and over and over again and expecting different results is the hallmark of insanity! If you can't see beyond the two-party system you've been brainwashed, dumbed down and you will get what you deserve.
On the other hand, if you vote for a person who truly represents your views you might get a doofus. Isn't it better to have a doofus who is trying to do good than a known-to-be corrupt politician who is a better liar than your doofus.
Throw off that two-party yoke and look beyond what msm wants you to see. You actually have hundreds of options.
www.politics1.com... That ain't gonna happen until people are on the edge of that proverbial cliff hanging off it by a scarlet thread screaming for their lives. Until then, they Vote.
edit on 1/1/2016 by awareness10 because: (no reason given)

I always ask, whose fault is that, exactly?

We're the apathetic idiots who can't be bothered to get involved in the process. Yet we complain oh, so bitterly when that apathy is taken advantage of.

We get the govt. we deserve. Nothing more. Nothing less.

That ain't gonna happen until people are on the edge of that proverbial cliff hanging off it by a scarlet thread screaming for their lives. Until then, they Vote.

That ain't gonna happen until people are on the edge of that proverbial cliff hanging off it by a scarlet thread screaming for their lives. Until then, they Vote.

Yeah.. The foundation of the West is beginning to tear and there are others who are telling it like it is.

Segal is but one

And this from the Irish Parliament i saw a couple of years ago, really slams the truth of it in the faces of those who wish to close their eyes to it all. 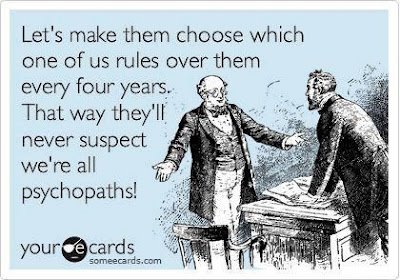 Even if the president vetoes a bill, the Congress can override the veto.
Most everyone will ignore the heart of the problem, the Congress and become caught up in the presidential circus.
We have to realize that the Congress encourages fixation on the President so they can pass the buck, blame what they are doing on the Executive branch. www.kickthemallout.com...

From a theoretical perspective I agree. In fact I was just doing some research concerning the viability of an independent or 3rd party candidate.

Jim Webb is one possibility. He is relatively centrist. I may not completely agree with all of his platform, but overall he seems to have a sensible approach. He's not a maniac like Trump. He's not a criminal like Clinton. I could get behind his candidacy, possibly even donating a few dollars. The problem I have with him is his ability to actually get elected.

When we, as the electorate, select the lesser of two evils, it tends to be based on how the candidate fits with our most important issues. I think in general it's impossible to find a candidate that is a complete fit with our beliefs. So we weigh our options, hold our nose, and push the button.

If an independent or 3rd party candidate enters the race, and that candidate pulls voters from the establishment candidate, who may have been your second choice, to the point of allowing the most evil candidate (from our perspective) win the election, then in the short-term we've gained nothing. Of course if the outsider candidate makes a strong showing, that may help to break the hold of the 2 party system in the long-term. It's a gamble either way.

So, when I go to the polls, I weigh my options. If it looks like my vote is not going to count either for or against the candidate I've selected, I may write-in a protest candidate. Or if one is on the ballot, I may select the 3rd party candidate. On the other hand, if it's a close race, I'll vote for the establishment candidate that has the platform closest to my view.

I think that's a logical, though distasteful, approach to voting. I would love to have a better slate of candidates for president than we'll have in November. I can't think of another election in all my years of voting that has a worse set of candidates than the one this year. Right now it gives me a headache to think that this time next year we'll be looking forward to the inauguration of either a criminal or maniac as POTUS.

I suppose it has more to do with what options there are for me to choose from though, don't it?.

Why is it people get pissed off and do silly # in contempt of the options available?.

posted on Jan, 1 2016 @ 09:17 PM
link
a reply to: DexterRiley
You must learn to fight the fear of voting for those who aren't of the "anointed" parties. The fear that you might "lose" your vote. The only way to lose your vote is not to take the opportunity to cast it.
Voting for someone other than the two major parties is THE ONLY WAY to send those parties a message in my opinion. Start on a local level. Support independent or third party candidates at a local level. Get out and help recruit and support them.
I understand that everyone wants to vote for the winner but where has that gotten us?
It is fear, fear of being ridiculed or called "fringe" that keeps us from doing what we know is the right thing to do. It is hard to step away from the safety of that herd. It is time consuming to do the research to see who is actually the best candidate for the job.
It is much easier to be red or blue and never acknowledge that there are other colors in the world. And yes, for nearly 30 years I've heard partisans from both parties telling people that if they want the party to change they must work from within it to change it. As far as I can tell both parties have radically changed in that time but I don't see any improvements. They've both become warmongers and whores to financial interests.
Throw off the party chains and dare to be free. No, you'll never find anyone with which you agree 100%. When I ran for office, I didn't agree with all my running mate's ideas. I did know that he was a good and ethical man who would put the interests of the citizens and the Constitution of the US and the Commonwealth first.
It's not an easy road to walk but hey, if it were easy it would have been done long ago right?
Take off the party blinders and take some time to look at other parties. We don't have to sweep the first election, just make a few changes by denying the major party a seat here and there. One or two legislative seats can make a world of difference in a lot of places. (It certainly made a difference here in the Commonwealth a few years ago when the legislature was broke and couldn't come up with a budget. The lone independent in the Senate was the one who could work with both sides.) It can also scare the bejemmies out of the party hacks to see that happen.
Being an independent can also be a big advantage when it comes to working with the party people on a local level. Since I don't owe any allegiance to either party I find it easier to present solutions that favor the people rather than a party's position.
If I ruled the world I would abolish political parties and make them all turn in their war chests to the state and all PACs turn their money over to the Salvation Army.

I dislike Hillary and Trump. If I had to pick between the two I'm not sure who I would choose. On the one hand I am vehemently opposed to political dynasties and as such don't like the idea of Hillary, but on the other hand I think that Hillary has proposed more viable ideas than Trump has.

It's probably a good case for a third party vote.

That's interesting.
And you're quite correct, it would be a disaster.

But I'll go back to voting when they change the rules and include NOTA for every position. NOTA, None of the Above!
Where NOTA wins, the election must be done over with new candidates. If NOTA wins three times, the Position is eliminated...........until the next election cycle.