posted on Dec, 2 2016 @ 03:44 AM
link
a reply to: GoShredAK
My partner has said she felt these a few times since the 7.8 but they have never posted any local quakes around the time she felt them.
I may have felt them too, same period, but I thought at the time that the way I was sitting at the computer desk I might be leaning on a nerve in my thigh or butt, and that is what I thought it was.
I wouldn't be surprised that if they had the same equipment as PNSN have up on the Cascadia region that we would be seeing those tremor swarms back and forth underneath our area.
Kapiti Slow Slip

these are a bit different to the feeling of a long way off quake, maybe more like the cat rubbing against the chair
edit on 1200000033633616 by muzzy because: (no reason given)

posted on Dec, 2 2016 @ 08:36 AM
link
South America had it's 6M on the first of the month, paying the rent- how regular. Muzzy's right on the once a month average.
Average. That's why I guess I'm writing. I don't want to scare monger, even though I'm capable. But I won't.

That's all I'll say. It's above average.

Excuse me, Mr. EricBlair? Can you help me with something? You mention the NMSZ. I was living in Indiana (near Purdue) in the 80s when I felt my first earthquake. I believe it was approximately 30 years ago. At the time, I had no idea what the heck was happening. Of course, we eventually all found out it was an earthquake....but many of my neighbors refused to believe that, as "earthquakes don't happen here- it ain't California!!" So, sadly, we had a town divided: some who believed the news, and others who felt it was "bull-honkey".

But it was an EQ we felt back then, wasn't it? And probably from the NMSZ? Also...WHY? And why aren't more people paying attention to it? Because of the location? Thanks, Soup Master.

Yup, you probably felt an earthquake in Indiana. However, it wasn't the NMSZ, it was probably the Wabash Valley Seismic Zone. The two areas are most likely connected way back when the area was a rift. People should pay attention to the earthquake threat. There's tons of information on 1811.

Looking at the map, and looking at Geonet's "All" lists on a regular basis, it looks like Cook Strait is getting more than Marlborough, Cook is more tightly packed though.
To check this question out I made a graph breaking it down to days and each areas % of the total numbers of quakes for that day.
Quite even really, but interesting that overall Cook had more to start with but now its reversed.
It should be noted that the surge for Marlborough on the 22nd to 62.67% was the day of the 5.7 near Scargill which had it's own little aftershock series. 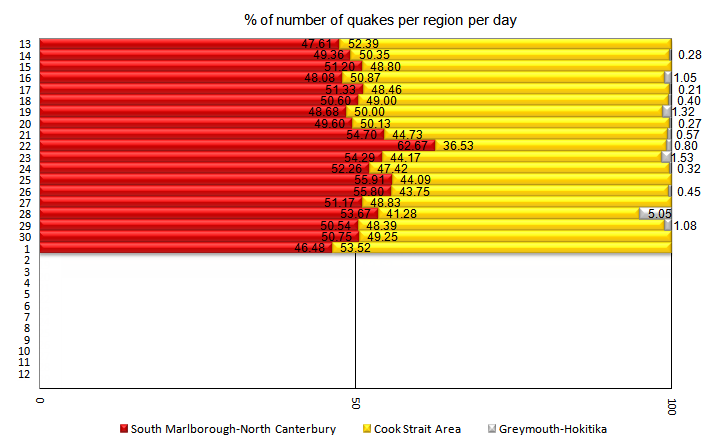 *I chose the graph bar colours based on each regions Rugby National Provincial Championship teams jersey base colour. Kiwis would know this straight away.
edit on 1200000033633616 by muzzy because: (no reason given)

I got the idea for the % graph from what I did with Kumamoto, when I broke it down into Prefectures per 199 bundle,

but I think this new type of % graph works better.
I might go back and do this % breakdown for Kumamoto, seeing as the 199 bundles were based on the 199 icon Bing maps I had created, which no longer work and have been deleted, so its not really relevant why the graph shows per 199 bars. Job for the weekend.
edit on 1200000033633616 by muzzy because: (no reason given)


I see quite a few "extreme" felt reports from Wellington CBD, I wonder how many more buildings will get the red sticker and have to be pulled down.
In case you haven't been reading the NZ news a 10 story office building and a Cinema/Multistory Car Park building are currently being demolished as they are a collapse hazard after the 7.8.
There are hundreds of other smaller buildings that have been red sticker'd.
edit on 1200000033733716 by muzzy because: (no reason given)

posted on Dec, 3 2016 @ 09:45 PM
link
further to post by: muzzy
I have figured out how to get, then loaded the GPS plots on a daily basis, using Geonet.
I have done it for Porangahau GPS station and loaded them to the Porangahau page because that is where the earthquakes were.
What I'm not sure of is are we now headed west or east, because of the negative measurement on the graph?
eg. On the graph X axis it says east(mm) -50 to -90, so does that mean "back 50-90mm" or actually West?
The reason for the confusion is when you broaden the length of time.
I ran it out to Jan 2014 start.

The graph shows we headed (east?) approx 20mm in one direction between Jan 2014 and Feb 2015, when we suddenly went the other direction (west?) 20mm for a short period of time, before continuing again 30mm until 17th Nov 2016 when we went 45mm in the opposite direction after the Hope Fault 7.8

If you go by the map they show everything is headed east, but they don't give a length of time on it, just that date of 26 November 2016.

Now looking at Kapiti its even more confusing because the GPS plot graph looks like a dome, over an even longer term. The movement here isn't on the same scale as the East Coast, and we are not having swarms of small earthquakes like they are.

From Jan 2012 to about end of Feb 2013 we were heading about 35mm one direction (steadily?), then it reversed direction almost back to the same spot by Feb 2014, then back off again on the original track, moving 45mm over the next 3 years (slowly?) until the Hope Fault 7.8 quake and we reversed (suddenly?)again 15mm.

All this slipping back and forth is making me dizzy.

I was scared to look at Cape Campbell after seeing the big cracks in the landscape in the media from the the 7.8, but I did, it moved over 1400mm (4.5ft)
You can see on the graph it moved (approx) 250mm in the Cook Strait series of M6's in July 2013 as well, but in the opposite direction to last months shift.

They are East of the subduction fault but off the coast a touch...

You do not see many of these at all in this area.

I feel that when Cascadia unzips, it will be centered on this exact area...we shall see.

posted on Dec, 6 2016 @ 02:58 AM
link
a reply to: radpeteage
Do you follow this web site?
www.pnsn.org...
You can draw your own depth cross section graph
Bring up the Faults
using the Tools dropdowm menu

On the Faults my mouse pointer becomes a finger when you hover on the line, which usually indicated there is some info to be had there
but nothing comes up when you click the line

I have before..I shall go there now.

posted on Dec, 7 2016 @ 08:37 PM
link
edit to: muzzy
East of Banda Aceh.
I hear over 100 killed by collapsing buildings.
Note the earthquake did not kill them, the buildings did.

The removal of a force may have the same effect as the application of the force.

Pull a rubber band back, you stored energy. Now release it!

A negative force can equal a positive force and positive and negative can be anything you want them to be.

posted on Dec, 8 2016 @ 12:37 AM
link
This is pretty cool, before and after NASA pictures of Kaikoura town (interactive) showing the uplift
earthobservatory.nasa.gov...

Too bad they didn't get further north up the coast where it lifted 6 metres out of the sea.

Also report that 10 Faults failed (but not the Hope Fault, which is the longest one).
www.stuff.co.nz...
I find that hard to believe given the aftershock locations.
Maybe they just mean the other faults showed rupture at the surface, whereas the Hope didn't show.
Maybe the Hope fault itself is yet to let rip.

My Insurance broker was saying that down there there is no intention to start rebuilding anything yet, as far as the ReInsurers overseas are concerned the Earthquake Series is still in progress
Indeed it is, 8131 aftershocks at download this afternoon, incl a 4.8 early this morning.

I wonder if this could be a fore shock? I defer to those with more expertise and who look more closely at these things than I do. Certainly worth keeping an eye on...

originally posted by: Virgil Cain
a reply to: SeaWorthy

I wonder if this could be a fore shock? I defer to those with more expertise and who look more closely at these things than I do. Certainly worth keeping an eye on...

Yes I was wondering the same thing. Guess all we can do is stay prepared for anything!

Very unlikely. This area does not have much larger then that normally

Magnitude 6.5 - Off Coast Of Northern California

Haven't been here for some time (months). I just wanted to say that you should probably be extra careful if you live in areas that either has constant ground movement or is expecting a bigger one anyway(Japan,U.S so on).

There are lot of things happening right before our eyes (Meteors,Fireballs Volcanic activity,Earthquakes in and outside unusual places) and many rumours about certain places of this planet.
I would not skip any DOOM article,video you see for at least a couple of weeks or months because some level of truth could be contained in it.