I didn't put the arrows on as that has to be done manually.
starts at Rhodes and finishes at Near Coast of Central Chile
I think there would be too many 7's in 50 years to make anything less than a birdsnest

I will have a try
edit;

That's a different way to look at things.

Whoa!
Did you ever see those string-art pictures? Lol! How long did it take to set that up?!

posted on Nov, 25 2016 @ 10:02 PM
link
a reply to: wasobservingquietly
Not very long, its a variation on the GPS Visualizer form that creates the maps with the icons on them, instead of icons it joins each lat/long location with a line.
I got the data for them from ANSS, they have the quickest search form.
I did this before a few years back when I thought I seen a sequential trend, but after a few days working on it it just turned out to be totally random, there is no way to tell where the next line will head to.
I does look cool though.
Another variation, which is right back to where I started with GPS Visualizer, even before I made my own icons was this.
The Plots are given numbers.
But it is hard to read some of the numbers, because they are so close together.

Just read about a 6.7 hitting the Xinjiang province of China.

Oddly, officials in that same province just within the last few days, demanded that all citizens turn in their passports to the officials, effectively cutting off travel.

It never stopped there on East CApe, but the offshore ones died away for quite a while.

As of Saturday 26th November, 225 earthquakes have been recorded in the Porangahau region since the Kaikoura Earthquake. Most of the earthquakes have been smaller than magnitude 3.
The Kapiti-Manawatu slow-slip event (my area)has involved movement across the Hikurangi subduction zone plate boundary of between 5-7cm, equivalent to a magnitude 6.8 earthquake in the last two weeks.


I'm going to have to do a page on that one, its too important not to. The maps are created using GPS stations , not seismographs, so its not really something I am able to download the raw data for.
I first mentioned it on the 22nd
latest slip map 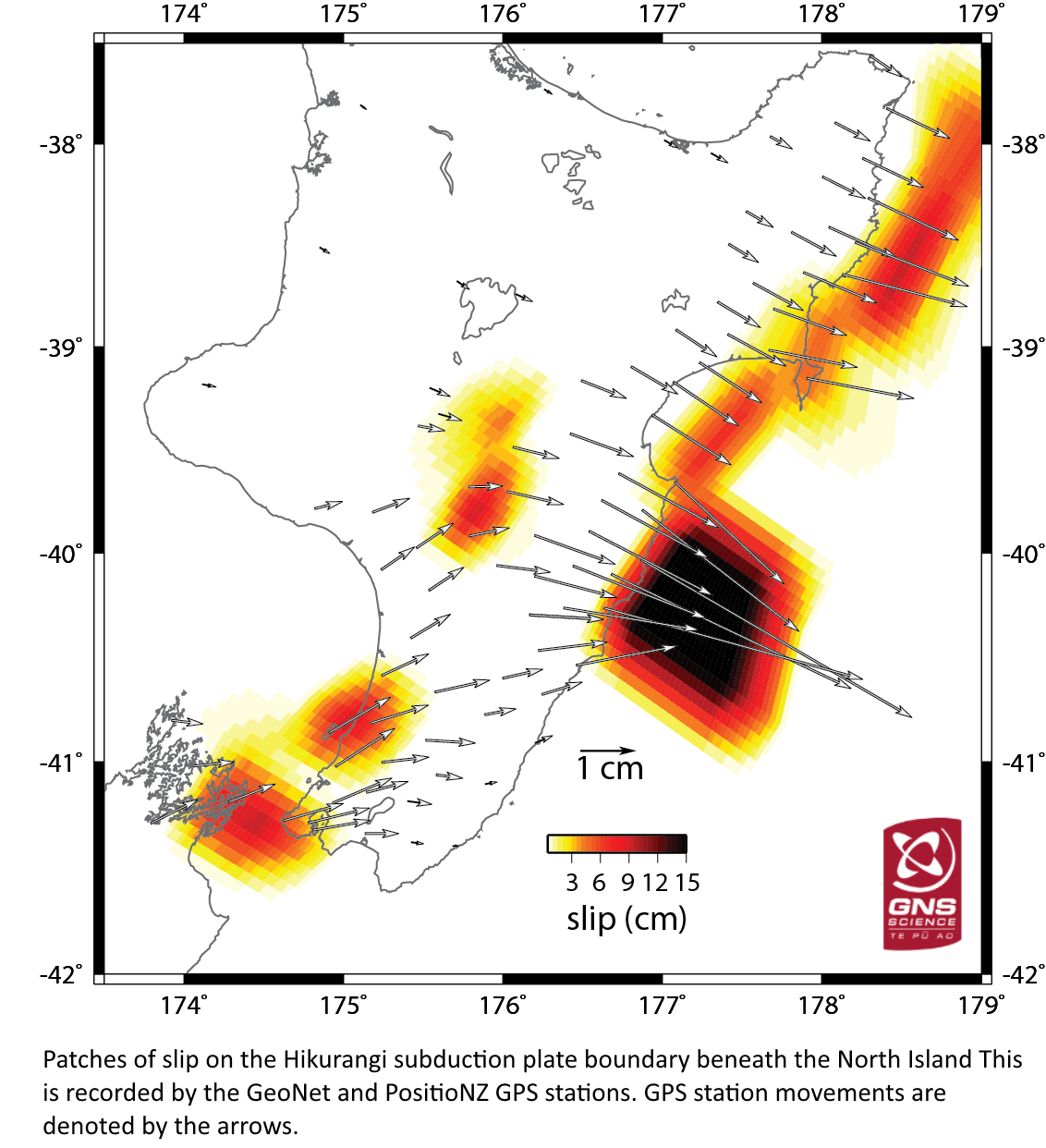 
I just spent an hour reading up on the GPS data from Geonet, I think I kind of "get it"
here is the page.
by writing a query you can get a graph plot form each station or multiple stations.
As a test/example I have taken KAPT (Kapiti) which is just offshore from me on the West Caost, and PORA (Porangahau) over on the East Coast where the swarm is happening.

So the east coast is moving at twice the rate of the west coast,
surely this mean the Wairarapa is being stretched apart??
makes sense as the Wairarapa is a Graben anyway.
Could this mean Wairarapa is in for a sudden jolt? will it keep stretching then snap? or will it just keep getting wider and wider?
I must learn more about this GPS stuff, and how to go back and get graphs from Jan 2014 when the Eketahuna 6.2 struck.
the more you look into this earthquake stuff the more questions there are.
edit on 1100000033033016 by muzzy because: (no reason given)

I didn't quite catch the full story on the truck radio, they mentioned something about Mines

I didn't put the arrows on as that has to be done manually.
starts at Rhodes and finishes at Near Coast of Central Chile
I think there would be too many 7's in 50 years to make anything less than a birdsnest

I will have a try
edit;

That would be cool if you could "sort" things by date / time, fading from one color to others. Then you could easily see the evolution of things, I'd think.

Holy crap, I've been thinking the same thing, but felt I'd...sort of received "enough" of Muzzy's time towards this. But YES, I was wondering if that sort of shading/coloring would allow us to follow where the "ripple affect" might be, if there were to be one, so to speak.

It seems to my naked eye that the EQs bounce very much "back and forth", eh? Like, I see that "nest" Muzzy described with all 50 years graphed, but within that zig-zag "nest", I'm not finding any "blocks" where the zig didn't zag very far.... or places where it looks like all at one time, a bunch of EQs were just "pooped out a pile".

(I apologize for my elementary vocabulary. I just hung out with my 10 year old son for an entire afternoon, and I seem to be coming up short with my more 'scholarly' language skills.)

posted on Nov, 30 2016 @ 09:18 AM
link
Greetings and salutations Quake Watch, I'd hope for the participation of some of the more technically minded of the regulars to this thread over here:

As always, much appreciation and gratitude to everyone for the consistent updates and discussion.

Situated in a traditional mining region, the town is part of the largest industrial copper-extraction area in Poland, with a copper-processing plant operating nearby Polkowice Wiki

I just read that thread and TA is saying it should be in the hoax bin? I don't know what to think about it really.

Another poster was suggesting it go in the hoax bin based on TAs agreeing (muzzy too, btw) with my assessment that the signals the person in the YouTube video was concerned over were, in fact, due to telemetry error.

The events described did happen, they just did not have the import being ascribed to them.

posted on Nov, 30 2016 @ 10:32 PM
link
a reply to: jadedANDcynical
The thread is full of all kinds of wild theories now even though 3 of us nailed it on page 2. Probably best to just ignore the thread or leave it to the nutters.
Someone suggested it was a recalibration of the seismos, but from memory that's just a straight up and down vertical line then nothing at all for up to half a day.

posted on Dec, 2 2016 @ 01:46 AM
link
We are feeling some very light tremors here in Waikanae on the Kapitistan Coast, in the last hour 7:30 -8:45pm NZDT, barely recognizable as quakes, but we are watching TV and both looked at each other and said the same thing at the same time "did you feel that?""
There is nothing on Geonet except M2's near Seddon during the period, and there is no traffic on the road.
I thought I would record it here, just in case we get hit by a big one tonight.
It could possibly be the Kapiti Slow Slip as well.
edit on 1200000033633616 by muzzy because: (no reason given)

Are these light tremors common in your area or is this something new?