posted on Aug, 21 2016 @ 01:06 AM
link
further to: muzzy
In the mean time you can check out the 100-trace Continuous seismic waveform sets on Far E off Sanriku
Maybe this series is a good opportunity for you all to understand these.
Note how the point of the "bow" in each case is on lines 20-22?
If you go to the interactive map above, slide the to "map" and find stations 20-22 you will see they are right to the west of these big quakes.
Then the waves tails away north and south, recordings from the the further away stations split into two lines, the first thicker part is the P wave , the thinner one behind is the S wave, hense the further away from the epicentre the station is, the bigger the gap between the P and S waves.

Couldn't sleep, and popped on ATS.

Thanks for posting those graphs. Cool!

Will take a better look tomorrow when I am awake.

USGS has screwed me up too, taking away the depth and time.

South Georgia has been active tonite I see.

posted on Aug, 21 2016 @ 09:43 PM
link
a reply to: crappiekat
The depth and time is still there (depending on which page you open) just below the bold magnitude and location at the top, eg;
earthquake.usgs.gov...

But they are really dumbing down the whole site. I blame phones, everything is directed at people accessing through their phones, so it has to be simple as possible.

I see if you click on Waveform in the left column you can go to IRIS and get the "real" info such as the GCMT , Me_broadband and Me_high frequency energy numbers (which I do for my M6.5+ pages).
That is handy if you are on your phone and don't have the IRIS saved to favourites/bookmarks.
Who the heck is going to bother thought? except us quakenuts, and we are more likely to be on a desktop or laptop.
I must admit I do sometimes have a look at what is happening on my phone in my lunch break if I am on my own.

Crappiekat, did you mean the current time, that used to be at the top of the list, on the left? I missed that too, when they redesigned (dumbed down) the site.

It is still there. You have click the link at the top that reads '198 earthquakes', or however many it says depending on your settings.
This: 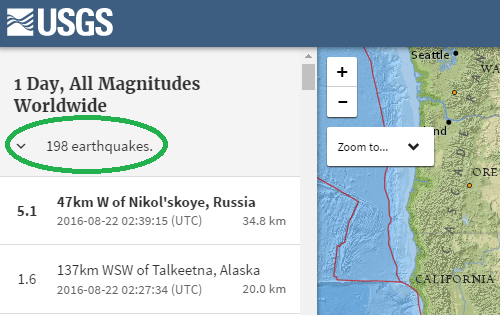 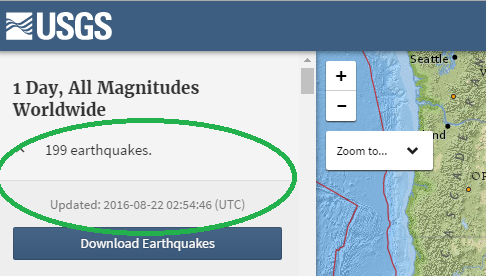 I have mine set to show UTC, but you can change it to your local time.

ETA: I also didn't like that they got rid of the little box with a handle to zoom in quickly to one area, but you can still do it. Just hold the 'shift' key then click your mouse and drag a box around where you want to zoom.


I am a little concerned about all the 5's all up and down the East coast of Japan over the last couple of weeks!

A 5.3 just occurred at the North 2nd of that long fault line....worth watching for sure

I meant the North end...

Yes, I wasn't sure how to change the time to local.

posted on Aug, 22 2016 @ 12:02 PM
link
a reply to: Olivine
That's handy to know, thanks, saves mucking around with the +/- boxes and dragging the map around.
That shows how poorly planned this USGS "upgrade" was carried out, a year after it came on we are still finding out how it works.
maybe I didn't get the memo of instructions.

However what I was refering to "local time" was the time at the location of the earthquake ie JST, NZST, CMT etc. that used to be under the UTC.

posted on Aug, 22 2016 @ 12:03 PM
link
a reply to: radpeteage
Yeah, especially after those 6's so close together in time and location it's a bit of a nervous wait to see what else may come of it

originally posted by: muzzy
a reply to: radpeteage
Yeah, especially after those 6's so close together in time and location it's a bit of a nervous wait to see what else may come of it


That is a long mass of linear footage to unzip at once...might be a 9.5 if that happened.

posted on Aug, 23 2016 @ 06:51 AM
link
I am thinking those two 6.0's off Japan's east coast were probably belated aftershocks from the 9.0 in 2011. Otherwise, I would have started another doomy thread about it. But this time I held back and decided to wait to see if that was probably true. So far it seems to be, but that can change at any moment in Japan... They are expecting aftershocks from that big of a quake for decades. Even with a 7+ hitting in that area, I am likely to put a lid on it, and not pull another TA freak out. But if two or more 6.5+'s hit below Tokyo on that southern zone, yes, it's freak out thread time again.

posted on Aug, 23 2016 @ 09:26 PM
link
You guys are slow. Italy just had one. It's just over 6. So, it may have cause some real damage, injury, or worse. They have super old buildings. So. I haven't even check more than the fact I saw it on the Yellowstone webicorders so is big.

Right in the middle of Italy. I was think about Italians today. I was watching a documentary of some crazy horse race in a town that has them beating each other with sticks. Plus, I was thinking about calling an Italian friend, (not in Italy, but they lots) near the coast. So, I'm not worried about them.

"
A magnitude 6.2 earthquake has struck central Italy, south of the city of Perugia, the US Geological Survey says, with the shock also felt in Rome.
The quake hit at 03:36 (01:36 GMT), 76 km (47 miles) southeast of the city, at the very shallow depth of 10km (six miles), the USGS said,
In Rome, some buildings shook for 20 seconds, according to La Repubblica newspaper.
So far, there are no reports of damage or casualties.
The prime minister's office said the government was in touch with regional heads of the civil protection agency.
The quake was initially reported as being magnitude 6.4.

Oh, Nevada. I've been quiet because it's been quiet. Yes, there have been minor upticks, here and there in those swarm areas. But of them are much weaker than the were. I'm just quietly waiting with an eyebrow raised.

I may have been to quick to judge. One town has major damage.

"'It's a tragedy'
The mayor of Amatrice, Sergio Pirozzi, has called the quake a "tragedy". Speaking to Radio Rai, he said:

"I'm trying to contact the services. The town doesn't exist anymore. The ancient doors have come down. We need help from the civic protection."

People are under rubble...

“There are people under the rubble… There’s been a landslide and a bridge might collapse.”

posted on Aug, 24 2016 @ 02:05 AM
link
Just woke up to my earthquake alarm going bonkers and the news of this quake in Italy. From a quick look it seems it not all that far from L'Aquilla. I pray that casualties are low.