Japan does seem to be picking up

Is this what you are refering too?

Just looked at that link. Sorry didn't go to the post I was refering to.

Are you refering to the Reykjanes Ridge?
edit on 26-6-2016 by crappiekat because: (no reason given)

The Hims are moving around. Hope no one is on that Mountain right now.

and as noted on that AQUA link
4.5 and 4.1 OFF S NIIGATA PREF a minute apart
100-trace Continuous Waveform Graph Image you can see the two "tails" at the top of the trace

Actually there is so much going on across Japan that I decided to change the layout of the japanearthquakes AGAIN !!
have changed from pie graphs to bar graphs as the Flipcard display
The Pies were divided by % and although the number labels showed the various magnitudes I didn't think it showed the quake activity from day to day quite like I wanted to.
I've also put the ~M1 data in there too, since the 17th June.
and the 25th June with the new SW Niigata Pref quake really made that change worthwhile, I have had to add a second link of the second batch of 200 quake map under M1 as on the 25th there were 402 of them.

The 4.1 and 4.5 OFF S NIIGATA PREF yesterday looks like will add even more numbers when the reviewed data comes out tomorrow, judging by the japan JMA map www.hinet.bosai.go.jp... (select Niigata pref. on the Prefecture Maps: dropdown list)

posted on Jun, 28 2016 @ 03:06 AM
link
Small Swarm near Nga Awa Purua Geothermal Power Station, N of Lake Rotokawa, west of Wairakei, NE of Taupo
6 x M2's and a M1
Not "The Geysers. CA" by any means, but first time I have seen them here at this location.
Wairakei does get some swarms there, usually at the Golf Course.
Whole area is volcanic of course
nzeq2016.blogspot.co.nz...

Why do they have to keep changing things?
The eq list has so much wasted, blank space between listings,
that a lot less show without scrolling.
Even worse on a small phone screen!

No place to click to make the map bigger or smaller.
So far all I found was using the mouse,
but it's too sensitive & won't stay where I put it.
And I can't get it the size I want.

I haven't taken the time to look any farther,
too disappointed right now!
Maybe it's just 'cause I'm old as dirt & don't like change!

Yea. Your just old as dirt and don't like change. LOL!!!!

I'm messing around with it now. I don't much like change either. . I do have my little complaints, but I know that as much as I look at that site, it will only take a couple of day's to get over it.

Back to playing with my refurbished toy.

Been watching Sary-Tash Kyrgyzstan. There's a little over a 1000 folks living in that area. If something bigger hits, I would be sad. It's in the upper 30's there. That's still pretty cold to be without shelter

posted on Jun, 29 2016 @ 11:57 AM
link
a reply to: wasobservingquietly
Its not too bad, compared to the last change which was a major one.
That's on the computer anyway.
Although the list is more spread out I think it is "cleaner" with less text

I still wonder where they get the location names from,
there is one for New Zealand
"M4.6 - 46km SSW of Brooklyn, New Zealand"
eh?
Its in the middle of Cook Strait!
Brooklyn is a residential suburb of Wellington city
the quake is actually closer to the South Island
Geonet called it "30 km east of Seddon"

perhaps "46km SSW of Wellington, New Zealand" would have been more appropriate, and most people would know where that is.

Maybe it goes on "nearest most populated town",

although I have my doubts, some of the Japan locations are pretty obscure.
And the "xyz SE of Lakeview, Oregon" has always been contentious here
as the quakes are in Nevada!
edit on 0600000018018016 by muzzy because: (no reason given)

Three more in the Southern Mid-Atlantic Ridge in a little over an hour. All 5's. Don't know how to link on my phone!
WOQ (Old As Dirt) Lol!
edit on 29-6-2016 by wasobservingquietly because: Sometimes the little arrow thingy works to start a new line...but sometimes it posts!!!

posted on Jun, 29 2016 @ 01:04 PM
link
There have been some issues in viewing my KML/KMZ files on Bing Maps on Mobile Phone, ie it automatically goes to your own location with a blank map.
I've spent hours Googling the problem, but never found anything to solve it.
It is important because although the NZTopo map is a workaround to be able to view KML?KMZ files on Google Maps it doesn't show the list of what is on the map.
That is why I also use the Bing Maps link.

By accident I just found out how to fix it, but it is a user solution, there is nothing I can do from here.
I don't know how many people would view my NZ, Japan or Significant Quakes blogs on their phone, most of this earthquake logging is research based and I would think you are more likely to view it sitting at your desktop or laptop.
However there may be the occasion to see it on your mobile, like sitting for hours at an airport waiting for a plane ....to New Zealand for example and checking for the latest earthquakes there in preparation for your arrival.

So the fix is easy.
When you click on the Bing Map link at the top of each daily page,
it will open with a blank Bing map centred at your location
Press the menu (3 dots one above the other) top right corner
a drop down list will open,
Press/Touch/Tick "Request desktop site"
and it will load the KML/KMZ file, list and map.

All my blogs have both mobile or web versions, on mobile if you want the web (desktop) version with the Flipcard overview layout, just scroll to the bottom of the page on the mobile and touch "view web version"
It doesn't alter the way Bing Maps works though, as that is a stand alone program.
Other phones might be different, but my J2 Android opens with just the list on the screen, I have to pinch the screen down in size to bring the map into view, then you can toggle between the map and the list as you desire.
pressing/touching the each events text heading on the list will open the popup tag on the map
as will pressing/touching the square on the map.
I found it pretty sensitive to use.
But at least it works.


like sitting for hours at an airport waiting for a plane ....to New Zealand for example and checking for the latest earthquakes there in preparation for your arrival.

because of a personal situation.
One of my younger brothers arrived in Wellington for a sports tournament back in 2013 right in the middle of the Cook Strait M6 earthquakes, at the time of arrival here we were just having the aftershocks in the high 5's. He phoned me right away "what the heck is going on here?"
He could have checked on NZ Earthquakes at the departure airport, and have been prepared for the wobbly arrival.
edit on 0600000018018016 by muzzy because: messed up the html tags

When I view your info. I am always on laptop. So for me it is not an issue.

Dang, your brother must have been impressed with the welcome. LOL!!

I have been playing with the new USGS, and I have decided I like it.

As you said. Cleaner. Much better to view things when going in really tight.
edit on 29-6-2016 by crappiekat because: (no reason given)

posted on Jul, 1 2016 @ 01:20 AM
link
a reply to: lurksoften
Must have been an error, I looked on GFZ when you psoted here and they had it too.
But it is gone from both, even EMSC's Latest data contributions which often has some quakes that don't make it to the main pages isn't showing anything

posted on Jul, 1 2016 @ 08:57 AM
link
a reply to: lurksoften
Hummm, saw the same.
I was looking at Volcano Discovery site and it showed a 6.0 mag (downgraded to 5.9) south of Townsend Cromwell Seamount but it is not as of now on USGS & not on EMSC which was its source?
Kinda large to just disappear?
Error? 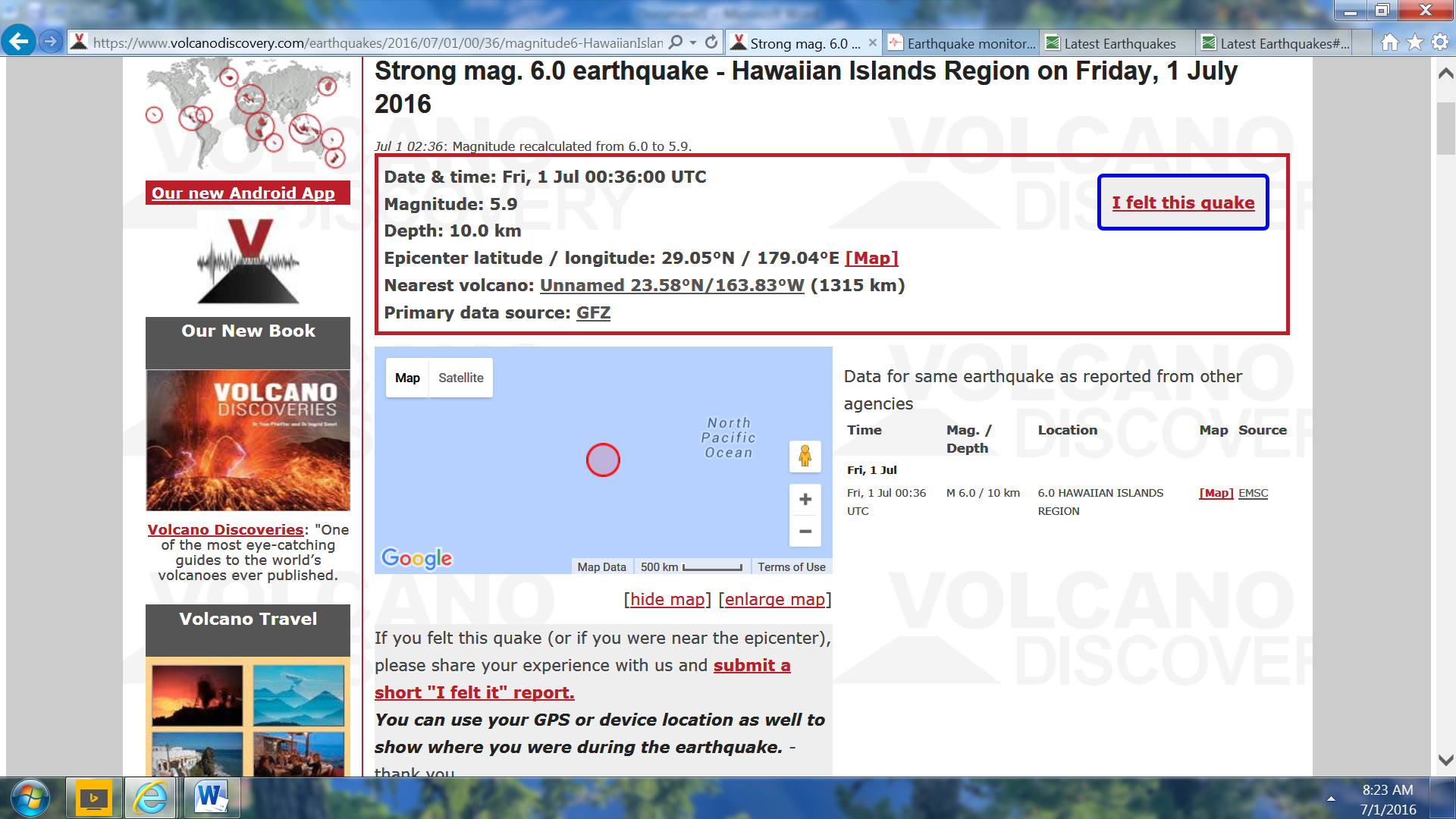 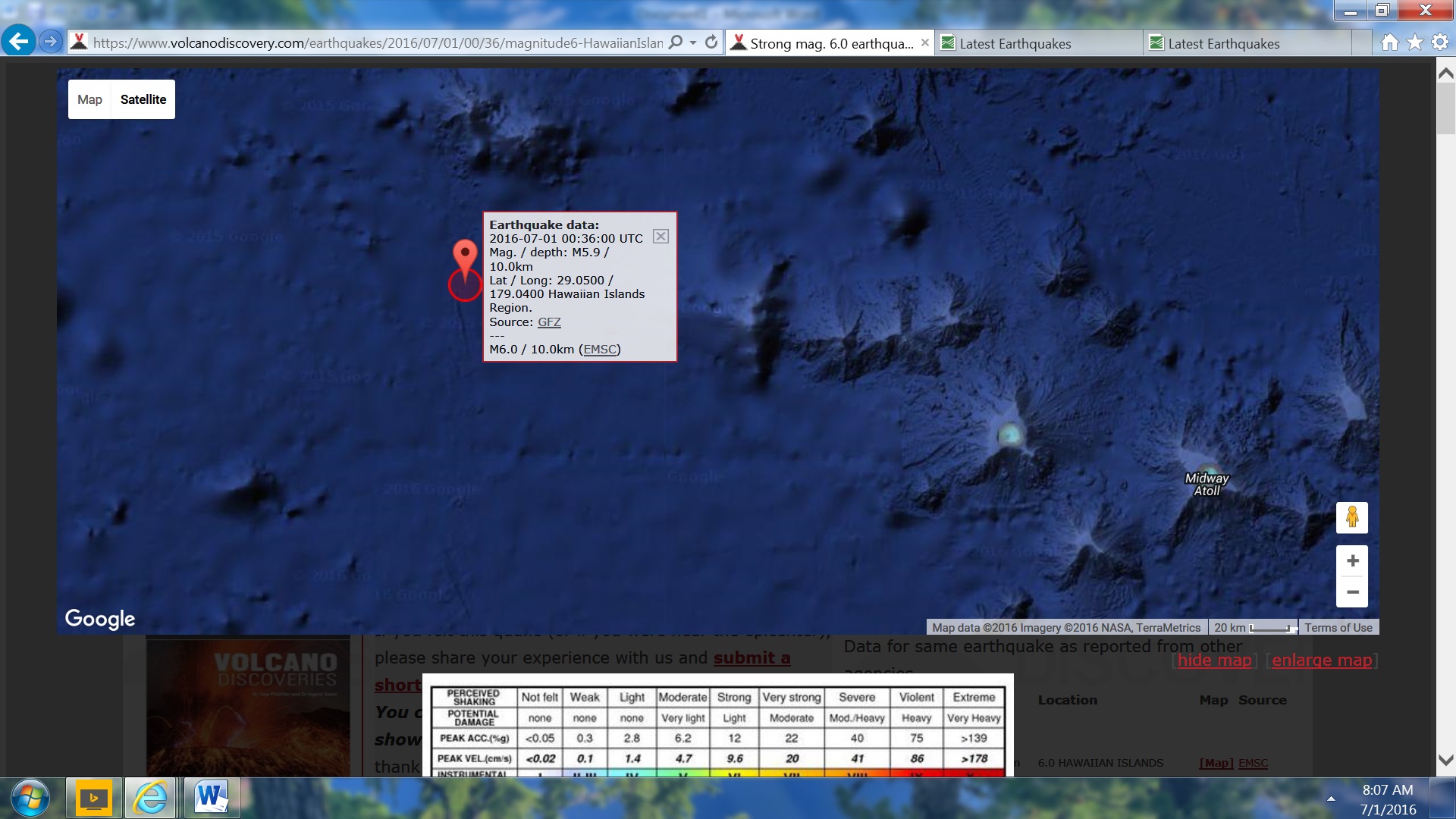 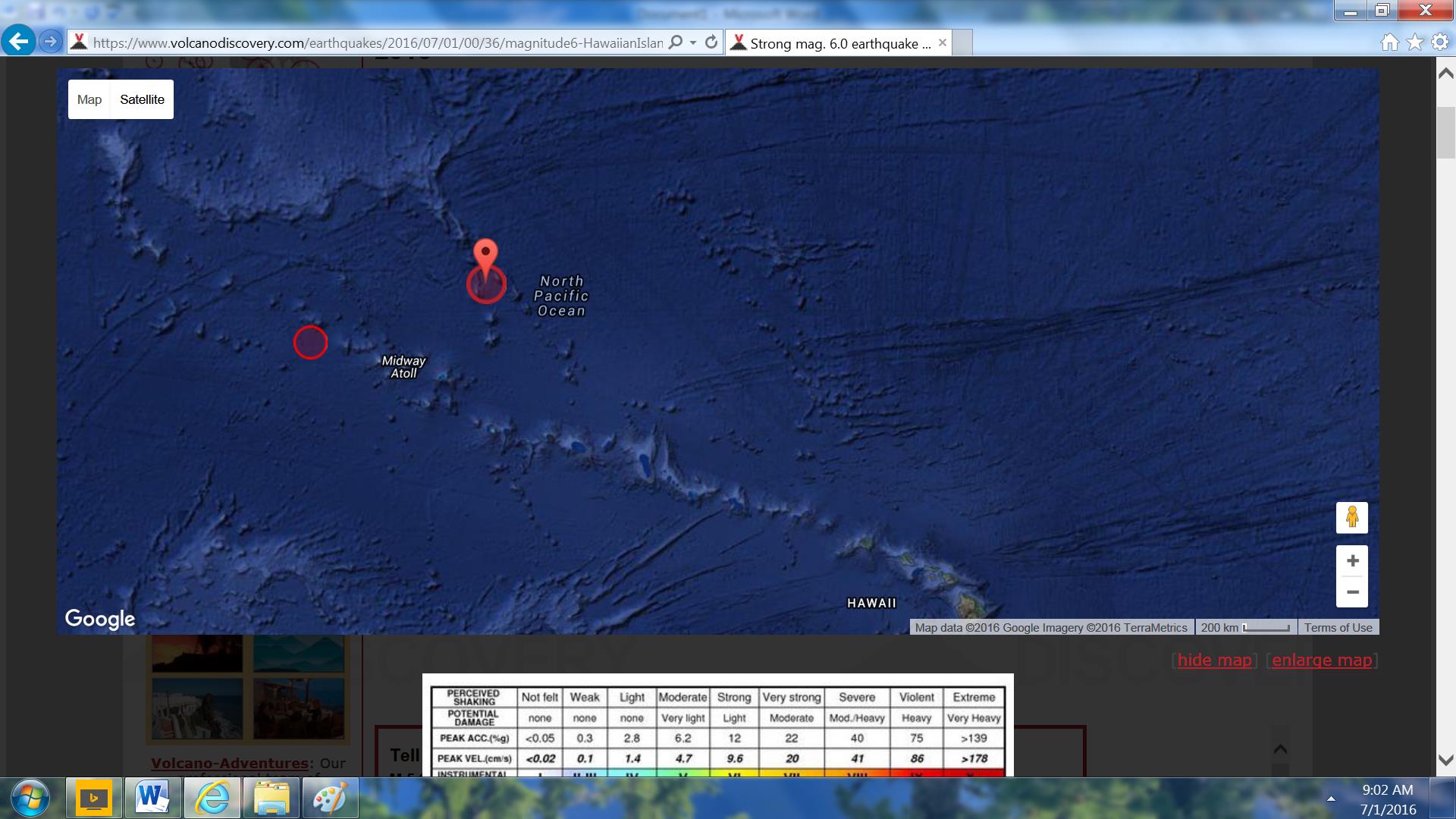 Little Bump in the heart of the New Madrid Hazard Area 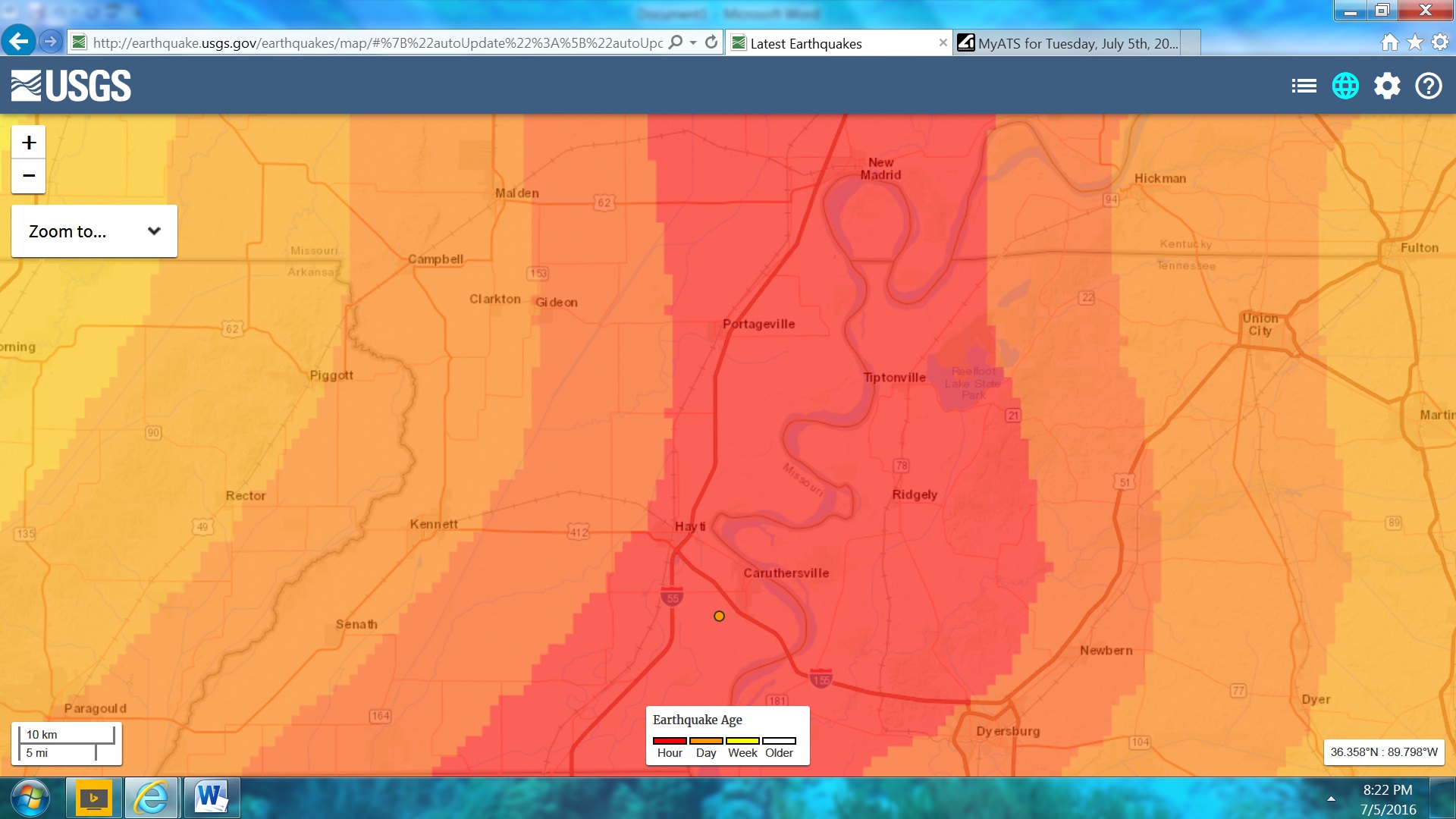