the Number of quakes as i look in globalincidentmap -earthquakes firefox vs chrome are totally different anyone else get this discrepancy????

posted on Feb, 5 2016 @ 11:43 AM
link
My :japanearthquake2: blog has been a total flop, this is the one that maps both M1+ and M~1 earthquake events on the same page, with a double pie chart graphic each day. I have only had 81 views from 35 visitorssince Sept in 2015, and only 15 views from 1 visitor in 2016.
Not sure why Wordpress doesn't get the visitors?, compared to Blogger, which gets 20-45 a day, sometimes hundreds a day. If no one is going to read it, I might as well not waste my time making separate pie graphs and posting on Wordpress at all.
There must be others out there amongst the 7.4 billion ( World Pop. Clock ........ thats scary!!) who are interested in M~1 quakes in Japan, surely.
So I have started from Jan 1st 2016 putting that M~1 link on the daily :japanearthquakes: on Blogger.
Here is where it is;

There is always something happening in Japan earthquake wise.

Of course the reason I have to split out M~1 at all is because Bing only allows 200 markers per map, the average number of Japan quakes per day (map) is over 300 combined, so it won't work.

My guess is no. It would appear that the peak (of what we can see) has passed in terms of the highest energy output.


So far no deaths yet but significant damage is being reported. 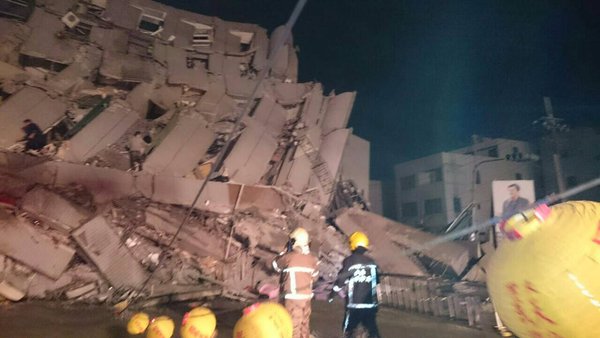 Reuters reports that multiple buildings including a residential complex have collapsed in Taiwan. This earthquake is by far the most destructive of the recent years. A dangerous fault line runs through the middle of the island.

www.cwb.gov.tw...
Central Weather Bureau have a nice KMZ file for those with Google Earth, shows historic quakes as well as Intensity of this one.
www.cwb.gov.tw...
edit on 02000000353516 by muzzy because: (no reason given)

Muzzy!!! That's not true. I always go and check out your page. And I go and look stuff up sometimes, when I want to compare stuff.

Some of the pages won't let me look, because of that message I get. " subscriber something something etc." I just figured maybe they were old pages and you moved the information, so I will go back and look for another link.

When I saw this earthquake, I remembered this article.

I know it's a different fault, but...

posted on Feb, 6 2016 @ 02:38 PM
link
a reply to: lurksoften
That video on Earthquake Report showing the two high rise buildings that tipped over is pretty amazing.
See that a lot in Asian earthquakes, makes me think they need to review their Foundation Engineering.
Not sure which would be worse, that or pancaking, I guess the chances of surviving a tip-over would be greater, sort of ride it down to the ground.
earthquake-report.com...

posted on Feb, 6 2016 @ 02:41 PM
link
a reply to: crappiekat
Yes I recall you liked the Pacman type pies, as I did. Trouble is I can't get them to show on Blogger at the same scale, they come out small and the text is blurred.
The M~1 data and mapping is still there (on the Blogger pages) just no graphic (pie).

posted on Feb, 7 2016 @ 06:49 PM
link
a reply to: muzzy
JMA gave the Taiwan quake 6.4 based on Displacement. and 6.7 based on Velosity
China Earthquake Networks Center (CENC) gave it 6.8Ms on the Chinese list and 6.7 on the World Data Center for Seismolgy, Beijing

Looking at what I see.

I am watching Napal.

Wasn't sure if you were going to add the links later.

posted on Feb, 8 2016 @ 05:57 PM
link
Well Puterman, you really should put something together and get the rest of those geology guys and girls to realize that storms in the Atlantic set off the rift. Again, there is a series of earthquakes in the mid-Atlantic, and once again, there is a big ass storm just to the east of the ridge. Let's remember storms are proceeded by a surge. So, the pressure, and the wave action, must change the stresses on the ridge and this causes earthquakes.

While I'm out here, Northern Nevada has calmed down a bit. Only a dozen or so in the last week. Challis, Idaho has almost as many for the same period.

WOW, i have some time in the time window to edit. As soon as I pipe up about northern Nevada finally quieting down, a small 2.5m pops off and makes me a liar. Still, it's not exactly as it once was.
edit on 8-2-2016 by ericblair4891 because: (no reason given)

Agency WEL(GNS_Primary)
www.geonet.org.nz...
3600 felt reports, from Dunedin to Auckland. (always suspicious of those Auckland one though)
I didn't feel it, was driving on the highway at the time

Looked like the Awatere Fault, but then had a look on data.gns.cri.nz...#
its on an un-named fault 4.4km north of Awatere Fault
Depending on the accuracy of the location data,
USGS has it 5.2 Mwr, but 2km SOUTH of the Awatere Fault ( almost same longitude though)
edit on 02000000383816 by muzzy because: (no reason given)