We have seen it before where the outside cladding is made of combustible material, Russia have had a few fires like that.

UAE Civil Defence officials said there were no casualties resulting from the blaze and New Year's celebrations would continue as normal, the Reuters news agency reported.

No victims at the moment.

Seems like the celebrations will continue despite the incident.

posted on Dec, 31 2015 @ 12:53 PM
link
Weird that it started on the 20th floor but seems to have gone downward as well as upward. One would think it would mainly just go upward.

I think I seems a little irresponsible to continue with their big flashy fireworks display when they have a raging inferno in the middle with almost a million people watching.

posted on Dec, 31 2015 @ 12:54 PM
link
That's one helluva combustible building. I thought new building regulations were supposed to prevent stuff like this happening. Dont they have a sprinkler system. ?

I think I seems a little irresponsible to continue with their big flashy fireworks display when they have a raging inferno in the middle with almost a million people watching.

Was thinking the same myself... Didn't know how put it best to be honest.


I guess they want to finish the year in a higher note than this...

originally posted by: OtherSideOfTheCoin
Not even a page in and this thread goes from a fire in Dubai to another 9/11 debate. Seriously guys can we try to stay on topic for a few pages.

Well, if this building DOESN'T "collapse" in it's own footprint, one can make the assumption that fire DOESN'T melt steel, like we were told on 911. Only a fool could believe the whimsical fairytale the Bush administration pushed as "truth".

If Bill Cosby can be charged with crimes he did more than a decade ago, then the same rules should apply to those that were responsible for keeping America "safe". It gives cause to re-open the investigations of 911. 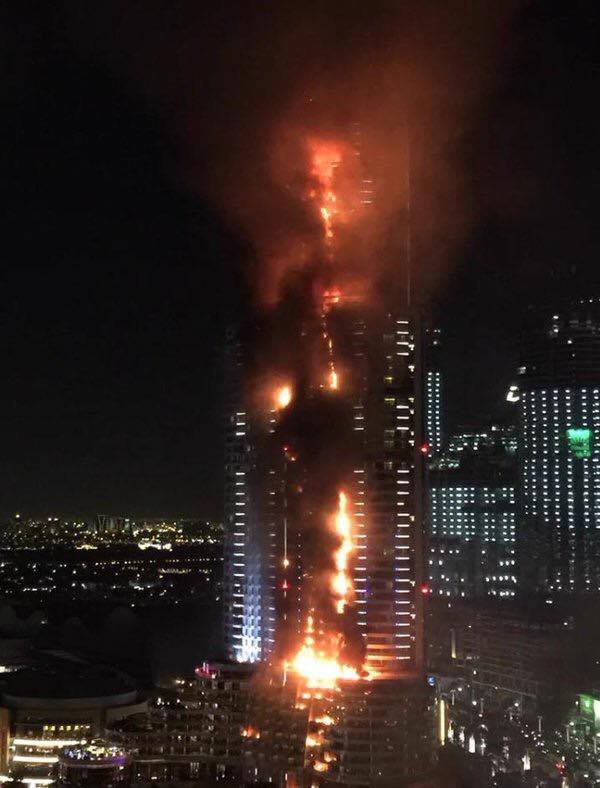 It's not "coincidence" this high rise hotel is on fire, on New Year's Eve.


Hopefully everyone got out.

I wonder how long until it collapses?

posted on Dec, 31 2015 @ 01:11 PM
link
looks more like the fire is more on the outside of the building just by the way it spread both up AND down so quickly.

Why can it not be a coincidence? it could happen any time of year and more so due to fireworks.
Why is this a conspiracy already?....
Hope everyone gets out and no loss of life.

Unfortunately it seems that while this terrible incident is going on some moron has taken the opportunity to vandalize their wikipedia page and make a joke out of the fire. I'm not going to dignify it by pasting it here and hopefully an editor will remove it.

Watching this unfold on CNN and seeing the flames engulfing a massive hotel and who knows how many people inside on New Years Eve... to joke about that is pretty vile.

originally posted by: OtherSideOfTheCoin
a reply to: Flatcoat

Yeah the reports I am watching where saying 20 floors could be on fire with fires possibly spreading to other buildings.

Most sprinkler systems are control mode.

They are there to help contain the fire in one area. The firefighters are the ones that usually put out the fire.

originally posted by: Soloprotocol
looks more like the fire is more on the outside of the building just by the way it spread both up AND down so quickly.

Please, can we NOT bring 9/11 into this conversation about a current building fire, 1/2 a world away?

We still do not now if it is external only or internal along all the floors involved. I saw a side shot in the live feed showing the pillar of smoke being blown to the side of the building while fires raged at the base and on various floors up the side.

God to hear the evac is going as planned. Yet, they still want to hold the fireworks display. Isn't this enough of a global display without fireworks too?