The Foundation for Research into Extraterrestrial Encounters (FREE)

posted on Dec, 31 2015 @ 06:42 AM
link
Learning about the reality of ETs in the cosmos necessarily brings about a paradigm shift in science. This shift can be seen in the information presented about a new foundation that former astronaut Dr. Edgar Mitchell has associated himself with: Foundation for Research into Extraterrestrial Encounters (FREE), which was formed in July 2015.

Physical laws as we have assumed we know them are in need of modification based on new knowledge. Mainstream science is resisting; it is up to the trailblazers to bring them around.

This new organization has been formed by retired PhD scientists and psychologists along with lay researchers.

The Executive Director of FREE is DR. RUDY SCHILD. Rudy is an Emeritus Professor at the Harvard/Smithsonian Center for Astrophysics at Harvard University, following an extensive career studying Dark Matter, Black Holes, and the fluid mechanical origins of Cosmic Structure and the Physics of Information. Because of his long association with Dr. John Mack and Dr. Edgar Mitchell, Rudy became interested in the formulation of a coherent understanding of the nature of space-time in the Universe, and is a champion of the Edgar Mitchell quantum hologram formulation of the nature of existence and reality. As Editor-in-Chief of the Journal of Cosmology he has attempted to broaden the scope of scientific inquiry to include the nature of consciousness and the Universe of Universes.

It is time to take UFO-related studies seriously. Science must embrace instead of deny and ridicule what people are courageously recognizing publicly, despite pressures to keep quiet.
edit on 12/31/2015 by tothetenthpower because: (no reason given)

posted on Dec, 31 2015 @ 07:19 AM
link
What we think of as "aliens" are not necessarily "extraterrestrials". They could have been here the whole time. They could be from another multiverse/dimension. Hell, they could have been grown in a lab by our own insane government. We have no idea. FREE (by it's name alone) is sliding the premise--that "aliens" are physical beings like us, from another place in the material plane--right past you. It is that premise they want you to accept before anything else.

I'm rambling. My point: Why call them "extraterrestrial" if we don't actually know what they are or where they come from? We have "UFO", which is actually a quite neutral and unassuming characterization of the phenomenon it describes.

How about "USE"? Unidentified Sentient Entity?

We do need to define terms clearly and accurately.

I've also heard a distinction made that "alien" means a physical entity other than human and "extraterrestrial" a non-human without a physical body, that is existing but invisible.

Also, I think some feel that "alien" is racist and "extraterrestrial" is a better term that is non-judgmental.

From my research, yes there are aliens that have always been here - underground. Not only is our moon hollow, the earth is hollow, as well. There are whole cities underground and a network of tunnels and high-speed transportation.

We also apparently have a sun-like core in the earth.

How about that for a paradigm shift?

Some are now a memory but we've had MUFON, CUFOS, NICAP...not to mention regional or state branches. Perhaps there could be an collaboration between the major organizations. However many people are turning to youtube or ATS to seek validation of a sighting, sure it is good to share but if you have seen something you truly believe to be a UFO then report it to MUFON or a local UFO group-that's what I've told a few people before seeking validation from people who were not in the area or know the area of the sighting.

Well the survey submissions closed on the 1st and according to the linked article they already have some preliminary findings.


The preliminary findings of our Phase 1 and Phase 2 Surveys support this initial hypothesis by revealing that "Abduction" cases are only 32% of the individuals who have had "UFO related contact experiences with non-human intelligent beings." Thus, the position of our FREE Board of Directors is that we know very little about this phenomenon and in fact what is readily perceived by the public, or the field of Ufology, might be totally misunderstood and misguided.

They're taking a different approach to the subject by concentrating on "experiencers" so perhaps they may turn up something interesting , if not about Aliens then the Human psyche.

If their Operations Manager Rey and his entire family are experiencers then why not just study them ?
It's not costing me anything so good luck to them , look forward to some more complete findings and analysis.

originally posted by: Thecakeisalie
a reply to: ConnectDots


This new group is not for the purpose of investigating UFOs.

It is for supporting scientific inquiry into reported UFO-related experiences and phenomena, in a broad sense, with a focus on consciousness as being independent from the brain:

. . . The majority of our FREE Board of Directors, including Dr. Rudy Schild and Dr. Edgar Mitchell, hypothesize that all of these diverse "Paranormal Contact Modalities" (NDEs, OBE, UFO visitations, Remote Viewing, ESP, Channeling, Spirit Interactions, etc) are interconnected through what is commonly called "CONSCIOUSNESS" and that advanced physics, in particular, the Quantum Hologram Theory of Physics and Consciousness, can begin to describe the possibility of how all of these diverse "Paranormal Contact Modalities" are indeed interrelated with the UFO Contact Phenomena. Both Dr. Rudy Schild and Dr. Edgar Mitchell have published a series of academic papers on this very topic. FREE will begin, through the contributions of the five Ph.D. physicists associated with FREE, and other diverse scientists associated with FREE, to bring into our "Experiencer Research Study", the latest findings from advanced physics that might begin to explain the quantum nature of the "UFO Related Contact Experience".

The majority of our FREE Board of Directors also endorse the Post-Materialist Paradigm of what is "Consciousness", promulgated by Dr. Edgar Mitchell since the early 1970s and who helped establish the Institute of Noetic Sciences (IONS)-- a paradigm that firmly believes that consciousness is non-local and independent of the brain. This view of non-local consciousness might allow us to possibly explain a wide variety of special states of consciousness and many of the so called "paranormal" contact phenomena, including the UFO related contact experiences.

In addition, FREE will also uphold the views established by the field of "Transpersonal Psychology" that investigates the "Spiritual" aspects of our reality with openness and to help others who have had direct personal contact experiences to integrate these experiences into their daily lives and possibly into their spiritual practice. To this end, FREE will continue to support all "Experiencers" of paranormal experiences through the FREE "PEER SUPPORT PROGRAM" and other support services-- a program that has assisted over 300 Experiencers of UFO related contact experiences since September of 2014.

posted on Dec, 31 2015 @ 11:33 AM
link
I still don't understand fully how to use this website. It might just be my phones inability to process this website properly.

So instead of making a new thread I'd like to share an experience here, because this seems the most appropriate place.

Since I was a child I've experienced Sleep Paralysis. Body numb, eyes closed, almost certainly aware that I am sleeping, surely making it a lucid dream. In that state, being unable to move fear would overcome my body. Dread. Worried that something horrid was about to occur I'd start thrashing. Almost as though I was in a cocoon it is severe seizures of strength flopping me around on the bed, bound tight until I break through back to reality. I never knew was this was as a child until much later. One day after having experienced it the night before I researched it, finding that it is the beginning stages of "Astral Projection" and reading accounts of people having been abducted experiencing the exact same sensations when having an encounter while in bed. Now, I'm not one to attribute it to abductions, I think its more of a sleep phenomenon, considering I appear to be able to wake myself from these dreams if I thrash hard enough in my sleep. Often times bursting from my dreams still thrashing.

I stay with a friend now and still have these experiences monthly. As I was outside having a smoke with him we started talking about dreams. Not even mentioning my Sleep Paralysis he begins to tell me of a dream he had the other night. He began having the paralysis and could open his eyes. He says that in his dream a humanoid style head, though obviously not human has his head through the wall, as if he passed it through at will, and he is levitating around the room spinning and flipping as it watched. He tries to scream but he can't.

Now he didn't attribute it to an abduction but I've read LOTS of accounts of people having been abducted and had similar experiences as him. Now I've never had that exact experience, but suffer from Sleep Paralysis often. Him not having experienced this before I moved in with him just seems strange, maybe more likely coincidental. Even though I believe in the existence of Extra Terrestrial life, I'd hate to tag myself with an experience other wordly in origins because its been a big part of my life.

Any thoughts? Thanks guys.
edit on 31-12-2015 by TheOwnersDog because: Had to make some changes

How can we do any meaningful research with our primitive intellect and understanding of the cosmos.
Of course we view our "science" as sophisticated and far reaching when in reality it's more like an adolescent mixing household chemicals together hoping to create a muscle building compound. Scientist, like the adolescent have an agenda and preconceived notions built on academic pursuits and rigorous protocol.

The truth about the "others" will not be found thru science but thru metaphysical exploration. imo....


How can we do any meaningful research with our primitive intellect and understanding of the cosmos.


With our primitive intellect we have built machines that help us look back 13 Billion years to the early days of our Universe. 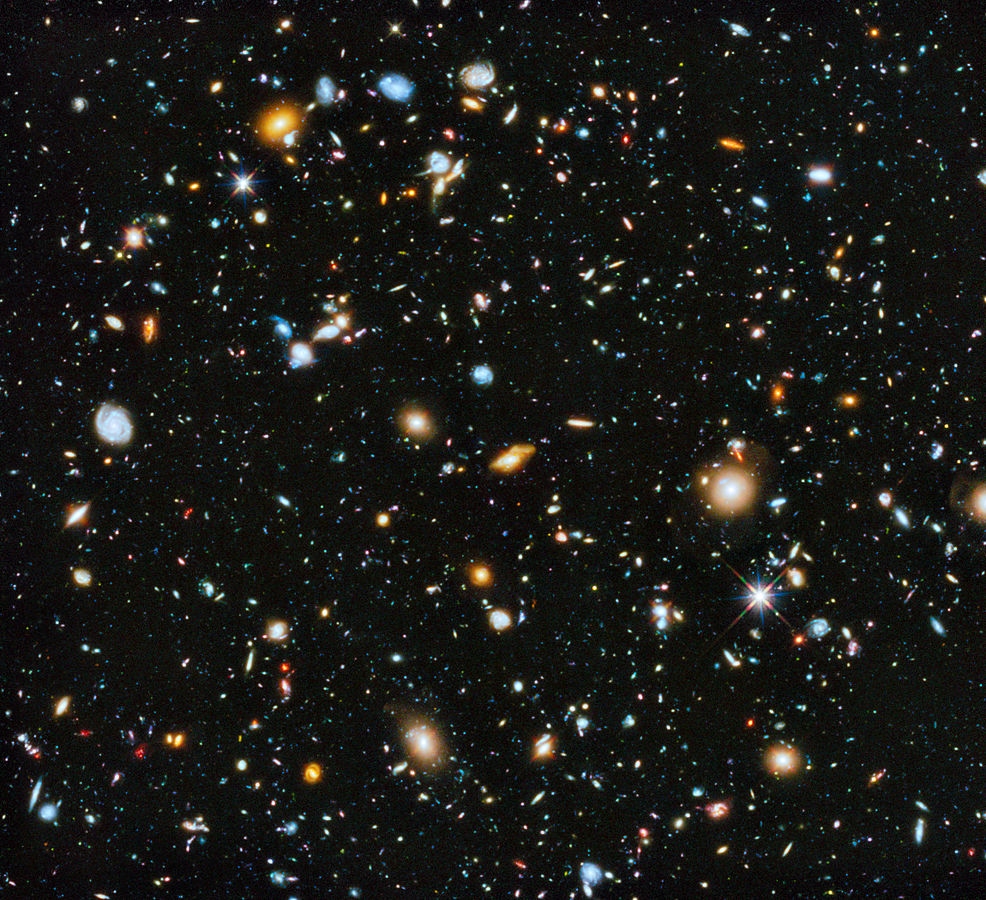 The truth about the "others" will not be found thru science but thru metaphysical exploration.


Others will be found and confirmed through science and our searches of the Cosmos for them , with the launch of the JWST (The James Webb Space Telescope) and subsequent missions that search will intensify in both scale and accuracy.

To equate our current space missions and work being conducted at CERN as little more than adolescent's mixing household chemicals shows a lack of understanding of how far we have come in recent decades and the speed with which we are moving toward unlocking some of the mystery's of the Universe.

To run first we must walk.

The real knowledge is in the secret space program, which you have to learn about in alternative media, from whistleblowers.

I don't doubt there is a secret space program , I do doubt that it is anything as advanced as some in the alternative world would have us believe.
www.space.com...

Such as who and what do you disbelieve?

Do you expect them to get grants from the powers that be?

Do you expect them to get grants from the powers that be?

I don't expect them to get grants at all.

Just found their acronym ironic.
edit on 1-1-2016 by draknoir2 because: (no reason given)

I see. I hadn't focused on that.

Maybe this has something to do with the name:

At FREE we believe answers will be found only when information is freely shared among researchers and by those who have experienced unexplained phenomena. Taking the current anonymous survey will help our research efforts and is greatly appreciated.