The Structure Of Identity 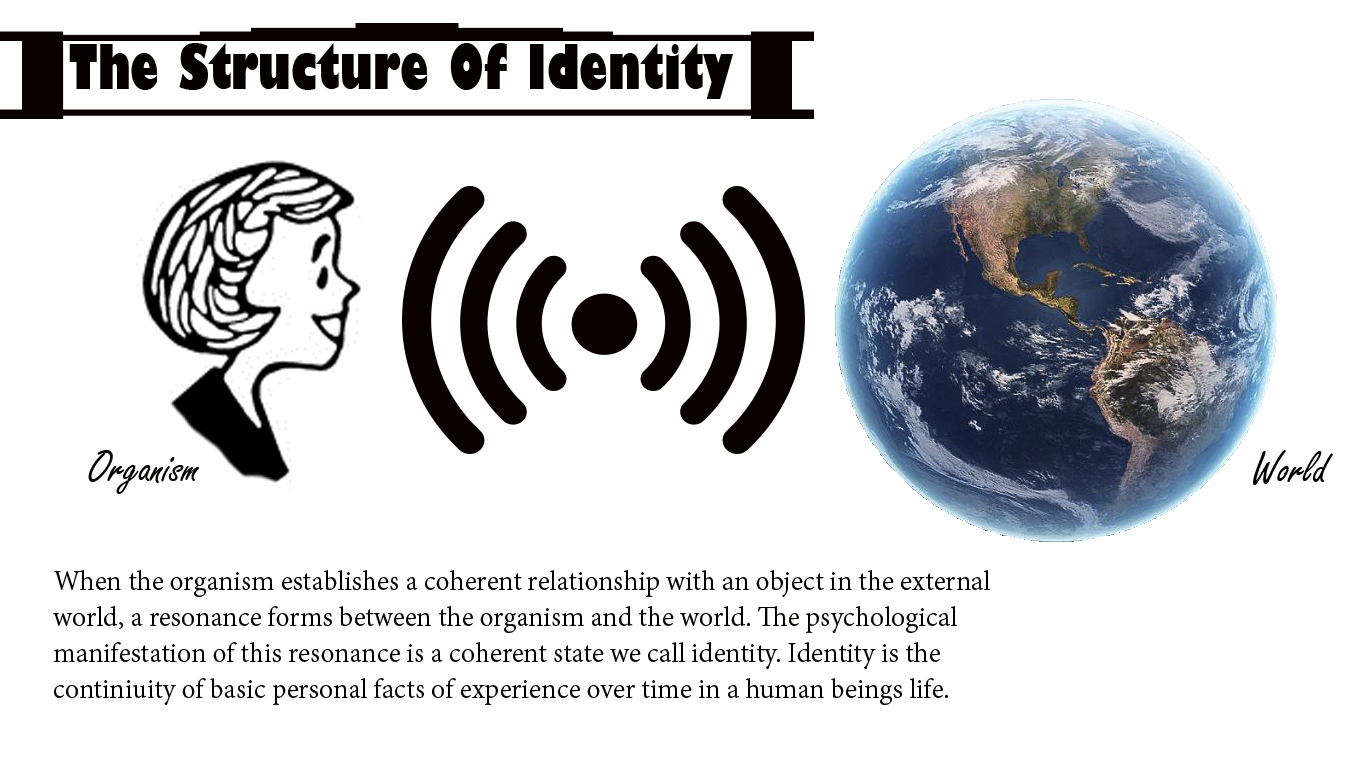 So simple, isn't it? When we think "identity", what we mean, and what it has always meant, is the coupling between the state of an organisms brain, and the interacted-with "object" in the external world.

You can't have identity without the context of a world for a background. Inside your own head, at night, when you sleep, we recall the "images" formed during a day, week or lifes experiences. Our background, or our "unconscious", is really a bodily phenomena, moored to the oldest part of our brain, the brain-stem and cerebellum; the images that unfold are images from our lived lives. They're translations, very often, as the brain-mind likes to convert the bodily into the image, so that our mental worlds dramatically "inform" consciousness of unresolved conflicts within the self.

When you see your consciousness in terms of biological evolution, you discover that there is a deep continuity of homeodynamics from the very get go: the universes creation of feedback mechanisms that maintain biochemical thermoequilibrium. When one considers ones consciousness as a product of this process - a product that somehow reflects on this process and experiences awe - we can recognize the way our consciousness becomes organized both in terms of its intrinsic structure and expected environmental objects (mental or physical). 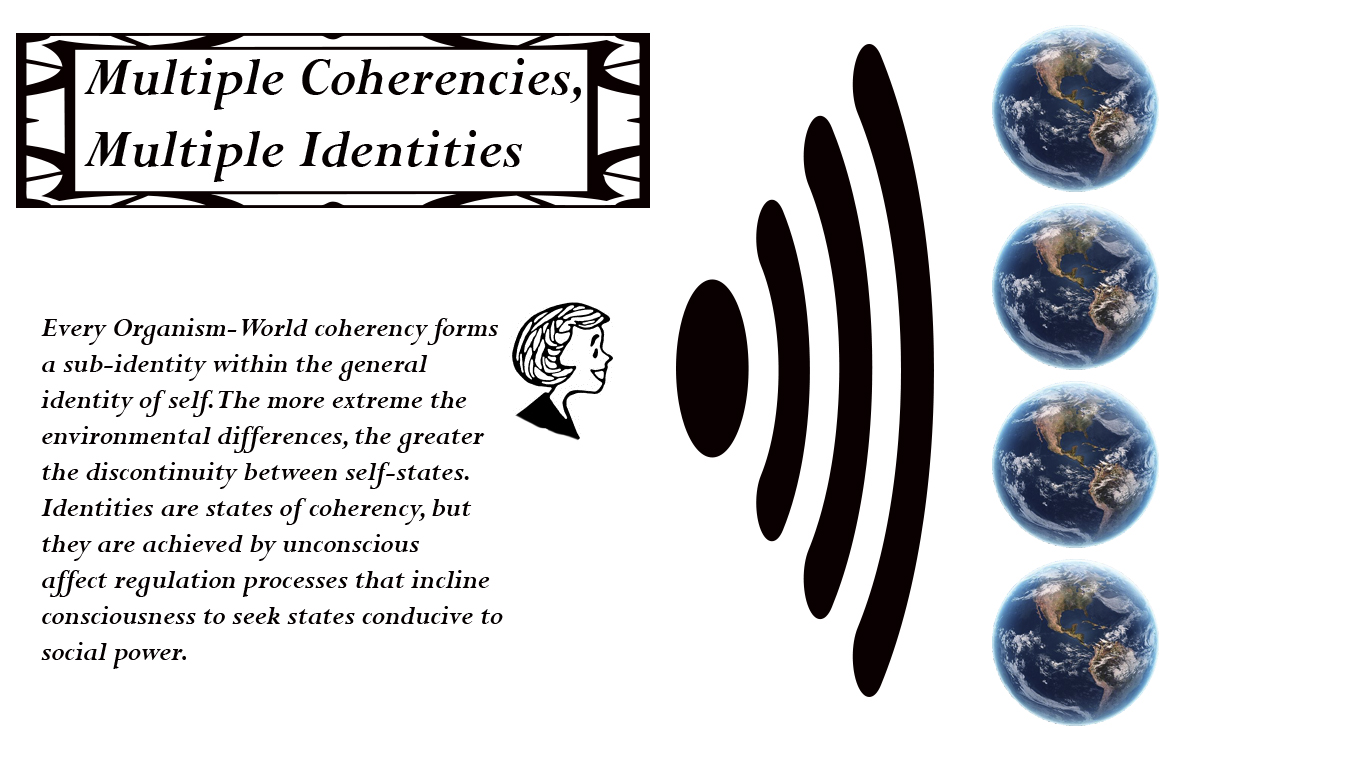 There are multiple 'coherencies', or identity states, in the lives of human beings. These states are "coherent" in that they sustain meaningful relations with the environment. However, there are states that are mutually incompatible. For example, picture a little boy, 8 years old, who gets beat by his dad every night. At nighttime, his circadian rhythms inform him through fear that he should take precautions, and thus hide himself. Fear motivates protective action in this particular organism-environment coupling, and so his brain is particularly wired to the threat of the object known as "father"; when father appears in mind, the amygdala triggers fear. If the trauma is deep enough, even words slightly linked with father can trigger affect changes, simply because the originating fear has proven overwhelming for the mind-brain to inhibit. 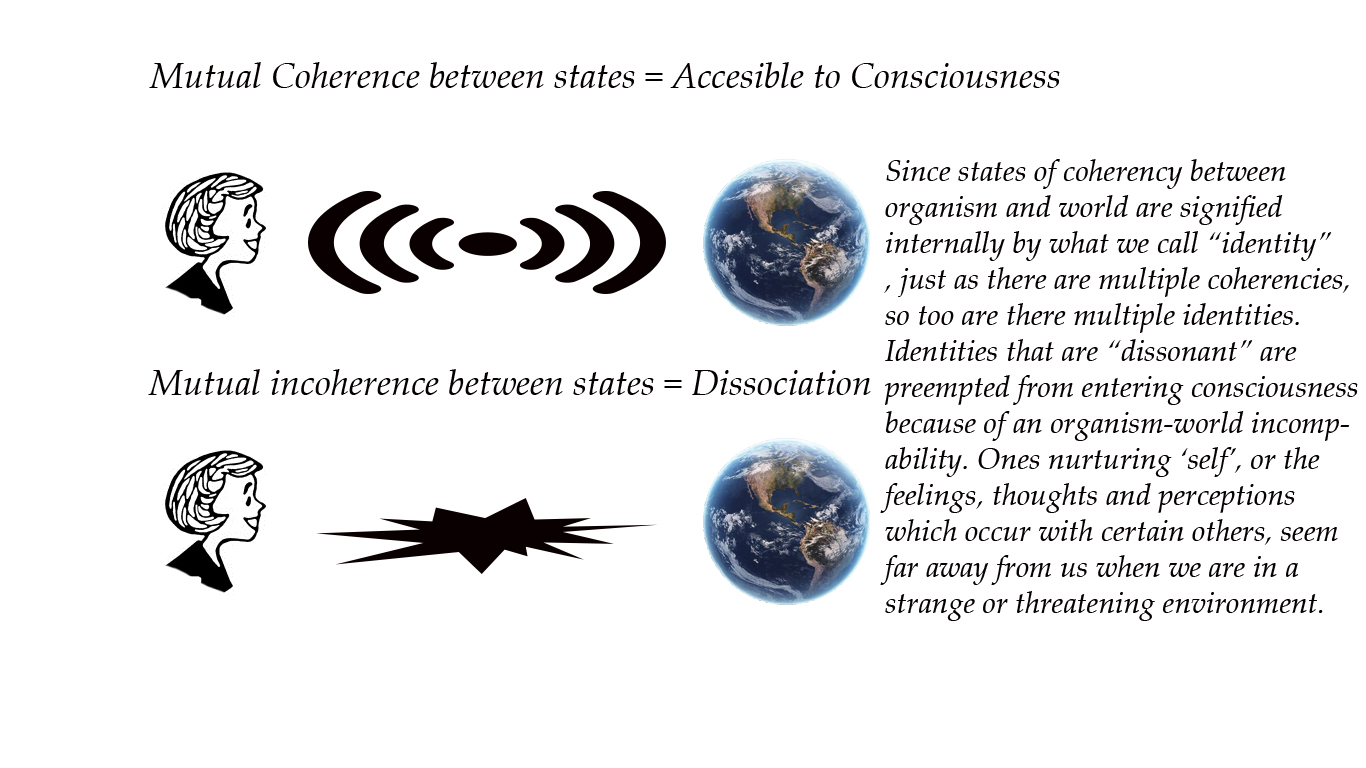 In life, the mind is more-or-less stereotyped in it's processing of the world. We think we think clearly - and that's the point: we seek coherency. We can even tell ourselves that we 'don't think were competent', but even then, we use the confidence of assertion to express something; so what does that say? It says that we ultimately act to defend ourselves because our minds have evolved to do just that: represent the intentions of the organism in a way that conduces to preset genetic regulations. Preset genetic regulatory factors (DNA) maintain the memory of "what worked" in the past, and so the majority of human beings are imprinted with a certain dynamic affect sensitivity that conforms to the species norm, which is what we see, for instance, in the baby's response to a smile or grimace, a loud or soft voice, a slow moving or fast moving body. Everyone knows which one of these a baby will naturally prefer.


Very nice, what are your thoughts on a "collective unconscious" and its existence or non-existence?


In life, the mind is more-or-less stereotyped in it's processing of the world. We think we think clearly - and that's the point: we seek coherency. We can even tell ourselves that we 'don't think were competent', but even then, we use the confidence of assertion to express something; so what does that say? It says that we ultimately act to defend ourselves because our minds have evolved to do just that: represent the intentions of the organism in a way that conduces to preset genetic regulations.

You state that 'we think we think clearly' but has the thinker actually been found?
'Who's' identity is it?

If thought is found to be incoherent then why not stay with the actual present environment? Thought is frightened and will always be trying to save itself - it sees danger everywhere - except where it is but thought cannot see what there is because thought is never concerned with now - thought shows you before or after (memory and anticipation). The before or after is being projected over what is happening - so what there really is not experienced as it is.

Imagine just for a minute what life would feel like if the mind was not full of before and after. The 'before and after' obscure 'what is' - thought is incoherent.

without before or after, we'd essentially be animals. There would be no thought - or a thinker - let alone a civilization, culture, or language.

However much you dislike time - temporal constructions like past and future - they are necessary to make sense of ourselves to ourselves - as well as to one another.

What do you think came first, itsnowagain: your thoughts about the "incoherency" of thought, or the evolution of a group selection process that uses feeling states to incline organisms like ourselves to "make coherent" a commonly experienced world?

Existence is time-based. Or, to put it differently, we need time in order to conceptualize our existence. Right now, you use thought, or time, to make sense to yourself the "incoherency" of thought. Even if there is truth to this claim - would you deny that without thought, time, and the way we use these processes, the world would be far more full of suffering than not? How can anyone care more about questions of "the incoherency of thought" than the consequences of what getting too involved in such questions can have for others - such as children, who don't have the cortical wherewithal to even conceptualize such metaphysical issues?

It takes courage and deep compassion to care about others more than you care about yourself - or, to be more involved with personal, mental issues, than with the real live world existing around you.

Have no effing clue. I am very well read in the subject of consciousness, mind, and the processes which led to its emergence; but the question 'what is mind' is riddled with all sorts of unanswerable conditions, the biggest of which was pointed out by Wittgenstein: a being existing within a system (say, the brain-world organism coupling in space and time) cannot escape the conditions of its existence to explore what it exists beyond the system.

Yes, there does appear to be some sort of evidence of a deeper quantum relationship; in fact, my more sanguine side believes that love is the core of it all, and so when love in present in a being that fosters its expression, perhaps the quantum world within biological and physical reality becomes quantumly entangled? I don't know. But my 'intuition' inclines me to believe that one day science will discover that consciousness is relevant not merely to the lives of lived organisms like ourselves, but may be an essential foundation of reality. However, accepting this position carries some teleological implication: the universe may be "following a path", spiraling upwards, as it were, to a state where the physical organisms which emerge in physical time have access to an underlying quantum state of "wholeness", which is experienced existentially as the feeling of awe or love.

On the other hand - this may be my fear of death and extinction speaking. Who knows!

posted on Dec, 31 2015 @ 02:53 PM
link
I think mind has much to do with time. If one wants to see 'mind' or consciousness as essential, than the arrow of time must be illusory, or at least relevant only to the processes of space/time. If this is true, than consciousness is far larger and far weirder than the way we experience as individual beings.

This post, however, makes clear that the feeling of being an "essential self' is very much based on the conditions we emerge into: a physical body patterned by historical biological time, carried in genetic information, which itself "anticipates" the worlds we interact with. Because of this, every creature has a special 'world' by virtue of a special gene-environment relationship; dogs perceive smells that we don't because greater neural hardware goes to smell-perception than in our brain (a difference of some 200 million neurons). Likewise, we experience the world as we do because we evolved AROUND ONE ANOTHER. The "expected world" we encounter is far more than biophysical; it's relational, emotional, motivational, and only 'later', linguistic and abstract.

originally posted by: Astrocyte
a reply to: Itisnowagain

without before or after, we'd essentially be animals. There would be no thought - or a thinker - let alone a civilization, culture, or language.

However much you dislike time - temporal constructions like past and future - they are necessary to make sense of ourselves to ourselves - as well as to one another.


How can you make sense of yourself to yourself? Are you saying that you are figuring out what you are using time?
What are you now?


It takes courage and deep compassion to care about others more than you care about yourself - or, to be more involved with personal, mental issues, than with the real live world existing around you.


But I don't appear - only what is present is appearing. I do not appear unless I carry an image of myself in the head. If there are no images of 'me' and 'other' appearing in the head then there is no other to make sense of.
Life happens a lot more smoothly when there is just response to what is instead of carrying around an assumption of you and what you are about.

For example - many will see 'itisnowagain' (a symbol recognized) and then not actually be able to clearly read what is to be read because of preconceptions about the poster (and post) even prior to reading it because it is assumed that 'I know what the poster and post is all about'.
The mind thinks it knows but it is very often wrong. If one believes the mind without question then clear seeing will be prevented - but if it is known that the mind does not know then there is a good chance that a new type of intelligence can emerge. The actual watching of the mind in action will confirm it's incoherency and it will bring about a new fresh insight.

posted on Jan, 1 2016 @ 06:48 AM
link
Jiddu Kristnamurti and David Bohm investigate the construction of the me in this talk.

I think mind has much to do with time.


This is discussed in the video - mind is time.
edit on 1-1-2016 by Itisnowagain because: (no reason given)