Well, I wanted to start off with saying that after being super-lazy yesterday and posting a crap thread, I decided to try and redeem myself. Sorry about that!!

Everyone’s heard of introverts and extroverts—and people automatically think that extroverts are outgoing and introverts are reclusive. But these stereotypes aren’t necessarily true. The article explores and debunks five different myths about the two different types of people. 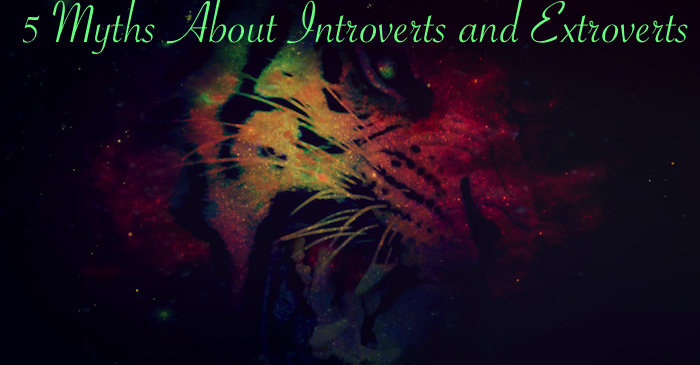 Introverts enjoy spending time with people just as much as extroverts. Talking more makes both extroverts and introverts more energetic.

The difference between the two has more to do with how each type perceives stimulation. Extroverts crave stimulation whereas introverts are more likely to seek out quiet in order to reflect.

No way, Jose. Even though extroverts are bigger risk-takers, those risks don’t always pay off. Introverts tend to be more reflective in their management style. Extroverts might want to be leaders more, but their methods aren’t always proactive. Introverts are also much easier to talk to because they know how to listen and observe carefully.

Extroverts can be a bit overbearing and can be annoying at times, whereas introverts’ cooperative and insightful listening style makes people feel more positively. Introverts are also not necessarily shy individuals—plenty are sociable. Introverts merely avoid people who are emotionally threatening.

The — EVIDENCE — suggests that there is no correlation between extroversion and sales performance.

In fact, apparently most people are actually ambiverts (a combination of an extrovert and introvert) because they adapt depending on the situation. This makes a lot of sense to me. Being an ENTJ (and highly extroverted), I wondered why I often exhibit qualities of an introvert. For example, I am an only child and enjoy my alone time. I love the quiet—it’s nice for reading and thinking and daydreaming.

This article confirmed what I already suspected to be true, which is nice because it's kinda validating.

based on your top five myths this seems like it is propaganda that makes introverts look better and extroverts look like aholes. i think the whole thing is a farce can we not all be extroverts and introverts depending on the situation we are in.

Anyway, it should be re-titled "5 stereotypes about introverts & extroverts."

There are truths there, because there are differences in the two, but it's not all-encompassing.

not all of us--many of us. nowhere did it say everyone.

And no, it doesn't make introverts look better. I think it highlights how stereotypes aren't always true. I'm not an introvert, so I don't know your perspective entirely. BUT from what I've seen, all introverts act like extroverts sometimes--like when they're comfortable or get excited. And I, as an extrovert, act like an introvert at times. It depends. But I think it's a lie that you're always just a static person. And if you really are, then cool. But boy that must be really boring.

I can see what you mean about the bias, but I agree with the overall meaning of the piece and think it should be considered as a whole, rather than just judging it based on a single aspect
edit on 28-12-2015 by rukia because: (no reason given)

there are positives and negatives about both. one's not better than the other.
edit on 28-12-2015 by rukia because: (no reason given)

What exactly are your qualifications to go around saying what is and isn't intro/extroverted behavior ?
I'm guessing you're about as qualified as I am, in which case you're completely wrong because of my arbitrary reasons.

I provided a source. Right under the picture. it's bolded. Wasn't it clear that this is a thread about that article? the thread title is the same as the title of the article, as per the rules of ATS when doing a thread on an article. I restated that title twice. And provided a link. And a second one. Also, please note the quotations around the parts that are direct quotes from a legitimate source. I summarized and paraphrased the rest. And then added my personal opinion and asked for yours. It's an opinion piece. But I think it brings up some good points. Such as the one it made about ambiverts. What's your problem?

(Quietly, and in small groups, or in your homes)

posted on Dec, 28 2015 @ 10:03 PM
link
Well this explains a lot. I have thought at times I am an extrovert and others times an introvert. Seems to depend on the situation, the people, the mood, the confidence, etc.

I agree that the list seems to somewhat denigrate extroverts and extol introverts. Perhaps the authors bias.

Yeah, especially considering all of the times extroverts inadvertently put down introverts. I know I'm guilty of it, lol. Plus, it was mainly just saying how it all depends on the person. I can respect that haha

posted on Dec, 28 2015 @ 11:54 PM
link
Another pretty good thread today. Extroverts are attention seekers, seeking reinforcement outside their little world. Introverts sometimes are together more and do not that reinforcement as much but do need some reinforcement by those close to them.

Sometimes people's interpretation of introverts is correct though, there are many types of people that could be considered introverts. I like both type of people, I myself am now more of an introvert while I used to be an extrovert. There used to be a song that said something like , you can't please everyone so you got to please yourself. Introverts may have understood this song.

Neither of these two traits are mental diseases yet we are being conditioned to believe they are. Everyone is different.

Yeah, though it was pretty fair, all things considered. Bias happens but yes, I'm glad you also had that reaction! I thought it cleared things up a bit and helped me understand better.
edit on 30-12-2015 by rukia because: (no reason given)


I remember arriving back home after a late evening shift at work, and a house-mate inviting me to join the party of friends in his room. I explained that I was feeling tired, and wanted nothing more than to go to bed. So he enthusiastically suggested that I needed to unwind with some "relaxing conversation".
My reaction, which I was too tired to express out loud, was; RELAXING? There is NOTHING relaxing about conversation with a bunch of strangers. Conversation is ruddy hard work!

I often find that being expected to talk (as against being allowed to sit among friends or family and listen) is energy-draining. I would certainly dispute the claim that it energises me. I think the article is over-simplifying.

Yeah, in situations like that I hear you. Conversation is relaxing sometimes, but that's only if my day wasn't full of it beforehand. Everyone gets tired of it sometimes, no matter how extroverted and stimulation-oriented you are. There's a point when enough is enough. I think the article both simplified it and highlighted important aspects like how people are mainly ambiverts--which you experienced with that "relaxing conversation" where you felt drained like an introvert might. I think. It just depends. Most of the time I love stimulation, but sometimes I don't.

originally posted by: rukia
a reply to: DOCHOLIDAZE1

not all of us--many of us. nowhere did it say everyone.

And no, it doesn't make introverts look better. I think it highlights how stereotypes aren't always true. I'm not an introvert, so I don't know your perspective entirely. BUT from what I've seen, all introverts act like extroverts sometimes--like when they're comfortable or get excited. And I, as an extrovert, act like an introvert at times. It depends. But I think it's a lie that you're always just a static person. And if you really are, then cool. But boy that must be really boring.

I can see what you mean about the bias, but I agree with the overall meaning of the piece and think it should be considered as a whole, rather than just judging it based on a single aspect

I'm a good example of a traditional introvert - If it came down to going to something like New Year's Eve in New York vs going for hiking trip by myself for a couple days, I'd be hiking by myself.

Now, last night I went to a really huge party, with something like 1,000 people crammed into a small hotel. You'd think an introvert would be running away from such a place like the plague, but I know I wasn't the only introvert there. In my case, I danced on the floor by myself, and sought out the less-populated rooms or chatted in small groups. I was quite lively (which, if I was drained by large crowds, wouldn't be the case).

People have degrees of both - Me going to the event was uncharacteristic of a traditional INFP, and if you think about it, the fact that I play instruments in groups shows a bit of the extrovert side. You can lean one side or the other.

1 is the one I have issue with...though not that much issue to be honest...just an article

Obviously it does not count for all...but actual introverts get a great deal of energy from being away from social interactions in order to recharge.

this part is the one where I shook my head and said...not "everyone" by a long shot. for a good deal of introverts, energy comes from solitude and their own devices.