Team members sequenced the genomes of a 5,200-year-old female farmer from the Neolithic period and three 4,000-year-old males from the Bronze Age.

Opinion has been divided on whether the great transitions in the British Isles, from a hunting lifestyle to one based on agriculture and later from stone to metal use, were due to local adoption of new ways by indigenous people or attributable to large-scale population movements.
The ancient Irish genomes show unequivocal evidence for mass migration in both cases.

Two regions were identified – Spain and Scythia – precisely the regions which are listed in the Lebor Gabala Erenn, a book which has been dismissed as mythical folklore.

Today, most scholars regard the Lebor Gabála as primarily myth rather than history.[1] It appears to be mostly based on medieval Christian pseudo-histories,[1][2] but it also incorporates some of Ireland's native pagan mythology.[2] Scholars believe the goal of its writers was to provide an epic history for Ireland that could compare to that of the Israelites or the Romans, and which reconciled native myth with the Christian view of history.

Whilst that criticism has some merit, again it would appear that at the core of myth and folklore, there are the roots of truth and fact.

DNA analysis of the Neolithic woman from Ballynahatty, near Belfast, reveals that she was most similar to modern people from Spain and Sardinia. But her ancestors ultimately came to Europe from the Middle East, where agriculture was invented.

The males from Rathlin Island, who lived not long after metallurgy was introduced, showed a different pattern to the Neolithic woman. A third of their ancestry came from ancient sources in the Pontic Steppe - a region now spread across Russia and Ukraine.

"There was a great wave of genome change that swept into [Bronze Age] Europe from above the Black Sea... we now know it washed all the way to the shores of its most westerly island," said geneticist Dan Bradley, from Trinity College Dublin, who led the study.

It would now seem as if the Scythian stories have been proven correct and if they have, what other parts of Celtic history, dismissed as fantasy, might be next?

posted on Dec, 28 2015 @ 04:15 PM
link
a reply to: beansidhe
It honestly surprises me, they were so divided. I thought this was already a given. Though not a proven given...until now. Another history mystery solved.

Very interesting. When you speak of Irish mythology, are you thinking of those of the Lost Tribes of Israel who reportedly made their way to Ireland and Britain in general? I believe it was the Behistun Stone that identified the Scythians as the descendants of Isaac, displaced by the Assyrians if I remember correctly?

Probably. These are people from Udmurtia, Russia, well known for their red hair. 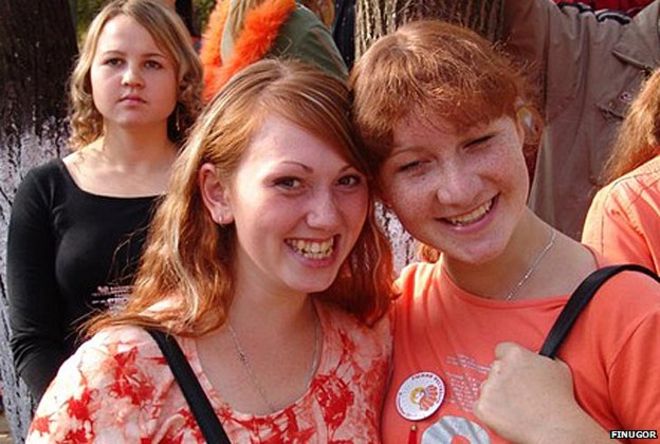 BBC - The reddest hair in the world

I'm fascinated by it too. I'm thinking of Goidel Glas, the father of the Gaels, and son of Nel and Scotia who travelled from Egypt, to Spain and then on to Ireland.

I'd wondered if Goidel Glas' story wasn't meant to have encapsulated the movement of a people rather than a man, and his story was just a way of remembering the main parts. There was a notion in there that he was related to Japheth, son of Noah, if I remember?
edit on 28-12-2015 by beansidhe because: grammar

posted on Dec, 28 2015 @ 05:10 PM
link
If you haven't yet, I recommend you look into brehon law. It gives a lot of social context to the mythology and also provides an interesting counter point to the "it must be myth" ideology. While the body of law was set down in the 7th century, there isn't any particular controversy over the fact that it's much older and had been administered reliably without written record.

There is a premium on exacting memory and perfect recital in oral cultures generally. The celts were aware of writing, without a doubt, besides the ogham they used for short messages, they traded widely with cultures that used writing regularly.

We should assume that they chose not to use writing for important information. This is supposed to be because the written word could be misunderstood, misinterpreted and misused. There's obviously a gap between the speaker and the writer but the size of the gap is debatable.

The idea that oral histories are unreliable is an assumption based on 19th century prejudice.

Fascinating article. There has been so much movement between various people and cultures, both invaders as well as people pushed throughout Europe via invasions from others moving west, I find it remarkable that definitive racial strains have managed to persist through the millenia.

What the modern academic minds disregard as myth, has been found again and again to be truth. It almost frightens one to consider the potential of our real history based on a number of myths and their implications.

Thank you for the good read.

I really appreciate your take on oral and written traditions. I too, feel that the intended conveyance of information through the written word has reader bias to such a degree, that it can be rather destructive.

Interpretations of posts right here on AT&T are a great example.

posted on Dec, 28 2015 @ 05:36 PM
link
It's interesting to see how this mass migration theory ties in with ancient literary sources.

This is not the first time I have encountered the theory that Irish DNA originated in the Iberian Peninsula.

In 2000 Ornella Semino and colleagues argued that R1b had been in Europe before the end of the Ice Age, and had spread north from an Iberian refuge after the Last Glacial Maximum.

I remember about 10 years ago when I first found out that my Y-Haplogroup was of Irish origin. I was always under the impression that my father's ancestors originated in Germany. After more specific testing over the years it turns out that my DNA links back to Niall of the Nine Hostages, an Irish king from 4th and early 5th centuries AD. Niall was quite prolific and about 3 million men in the world today can trace their DNA back to him. I believe he is second only to Genghis Khan in the number of his modern progeny.

Didn't want to throw the thread off-topic, but I love to tell that story.

I've only looked into it very briefly, for another thread, but I'll take your advice and spend more time reading about it.
Yes, without doubt they wrote - ogham as you say is a great example.

There is also the idea that to promote stories as myth purely as a political tool, will insure rightful challenges to the throne can be denied, land can be snatched etc etc.

Thanks for your input, mirthful.

a reply to: BlueJacket

It's a good read, I'm glad you clicked the link. I agree, and for me it's time to take stock of my own culture's myths and take the time to re-examine them.

Thank you for gracing our thread, your Highness.
It's not often I can speak with royalty.

Not off topic at all, I like to read about the ties between ancient literature and DNA too.

Thank you for gracing our thread, your Highness.
It's not often I can speak with royalty.

It is kind of funny. I just read about someone else who found out they were of Niall's progeny. His response: "Does that mean I'll inherit an Irish castle?"

All of this is just one more piece in the long building process of my personal theory regarding ancient history...sure shared by many more than me, or rather speculated.

I do think some sort of North African and a now non existent Middle Atlantic culture, as well as a far broader Black and Caspian sea civilizations than we presently understand will be at the root of certain aspects of blood type etc... the RH factor mutation has still not been fully understood and frankly I want to know why fair skinned,blue eyes tend to be RH negative and brown eyes dark haired RH positive.

I wonder where the term "Bog Hopper" came from..

originally posted by: rigel4
a reply to: beansidhe

I wonder where the term "Bog Hopper" came from..


It's probably an insulting derivation of fir bolg, men of the bag or bulge, sometimes called firmorians, said to have been in place before the tuath de danann but after the sythians (iirc). The tuath were said to push them to the lower quality land.

Bronze age people seem to have worshipped water and bogs in some way, they sacrificed a lot of high class objects to the water, newly minted and destroyed bronze swords, spears, that kind of thing. Possibly the same people. There were clans in the west of the country until the 17th century that claimed a direct line.

Fascinating. I need your library . Really enjoy your input thank you