(Mat 24:15-16 NAS) "Therefore when you see the abomination of desolation which was spoken of through Daniel the prophet, standing in the holy place (let the reader understand), 16 then let those who are in Judea flee to the mountains;

This is my understanding of The Abomination. There is no Temple (Physical Temple in Jerusalem) where there will be sacrifices and a literal Abomination will be put there. Let's read a few scriptures.

(Joh 2:19 NAS) "Jesus answered and said to them, "Destroy this temple, and in three days I will raise it up."

(1Co 6:19-20 NAS) "Or do you not know that your body is a temple of the Holy Spirit who is in you, whom you have from God, and that you are not your own? 20 For you have been bought with a price: therefore glorify God in your body.

You are the Temple, therefore the Abomination of Desolation is the 666 Mark of the Beast on your forehead or right hand as it states in Revelation.

(Rev 13:16 NAS) And he causes all, the small and the great, and the rich and the poor, and the free men and the slaves, to be given a mark on their right hand, or on their forehead,

There won't be a literal Statue or whatever people are anticipating in a proposed third temple built during the time of the Anti-Christ.

What does it mean by Daily/Regular Sacrifice?

My theory is when Aliens (Serpent/Watchers/Satans) arrive on Earth people will fall away from religions as well as Christianity and Jesus, thus persons whom once believed and followed his teachings will no longer be carrying that cross so to speak or sacrifice within their lives.

People will begin to follow what the "Aliens" are saying and teaching because they actually believe these beings are some kind of advanced civilization that can help people and the Earth. I'm here to let the cat out of the bag they are not extraterrestrial beings. They are what the bible has always called "Serpent" and "Satans".

Anybody who hasn't read this will probably fall victim to this. They will tear religion apart with their deception. They have been mixing with mankind genetically as well and you can read that in my Nephelim (LINK) article.

A theory is from a person named "Ron Wyatt" LINK. He claims to have found the Ark of the Covenant on 1-6-1982. He has since died.

It's interesting that those that take the mark of the beast do in fact surrender and give up and we know how hard it is for a rich person to make it to heaven don't we. Matthew 19:24 And again I say unto you, It is easier for a camel to go through the eye of a needle, than for a rich man to enter into the kingdom of God.

originally posted by: NumberMan
(1Co 6:19-20 NAS) "Or do you not know that your body is a temple of the Holy Spirit who is in you, whom you have from God, and that you are not your own? 20 For you have been bought with a price: therefore glorify God in your body.


I think you need to pay more attention to 1 Corinthians ch3 v16, where Paul says "You" (plural) are God's Temple (singular).
In other words, the relevant temple is not the individual but the whole community.
What you need to look for is the community of the church going wrong.

Also I think it is a mistake to put any trust in calculated time limits.
We are told elsewhere to hold out "to the end". That's the time-limit that matters. 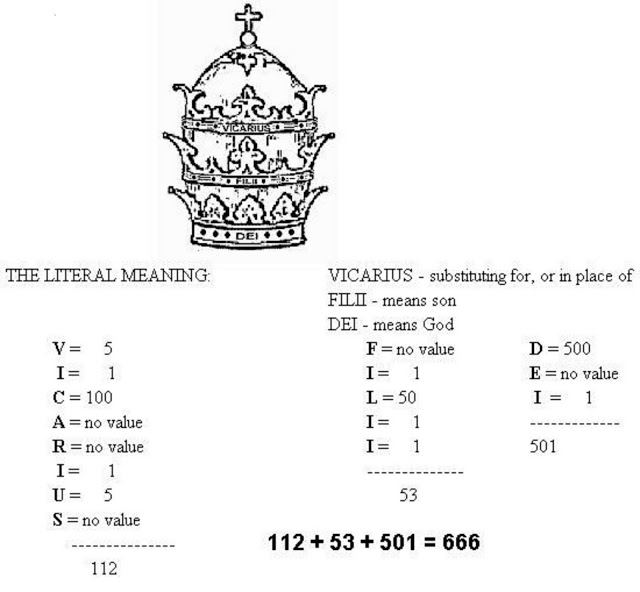 Hi I'm familiar with hebrew and greek and not sure where you're getting those values. I would need to see for instance why your "d" = 500 etc.. and then you have no values to other letters.

posted on Dec, 28 2015 @ 05:16 PM
link
a reply to: NumberMan
Infolurker is using Latin numbers (which is a little dubious in itself in this context).