Here's a comparison. At the top is your screenshot, at the bottom is what I see (but I typically use the light version of the site). You can see a distinct difference. 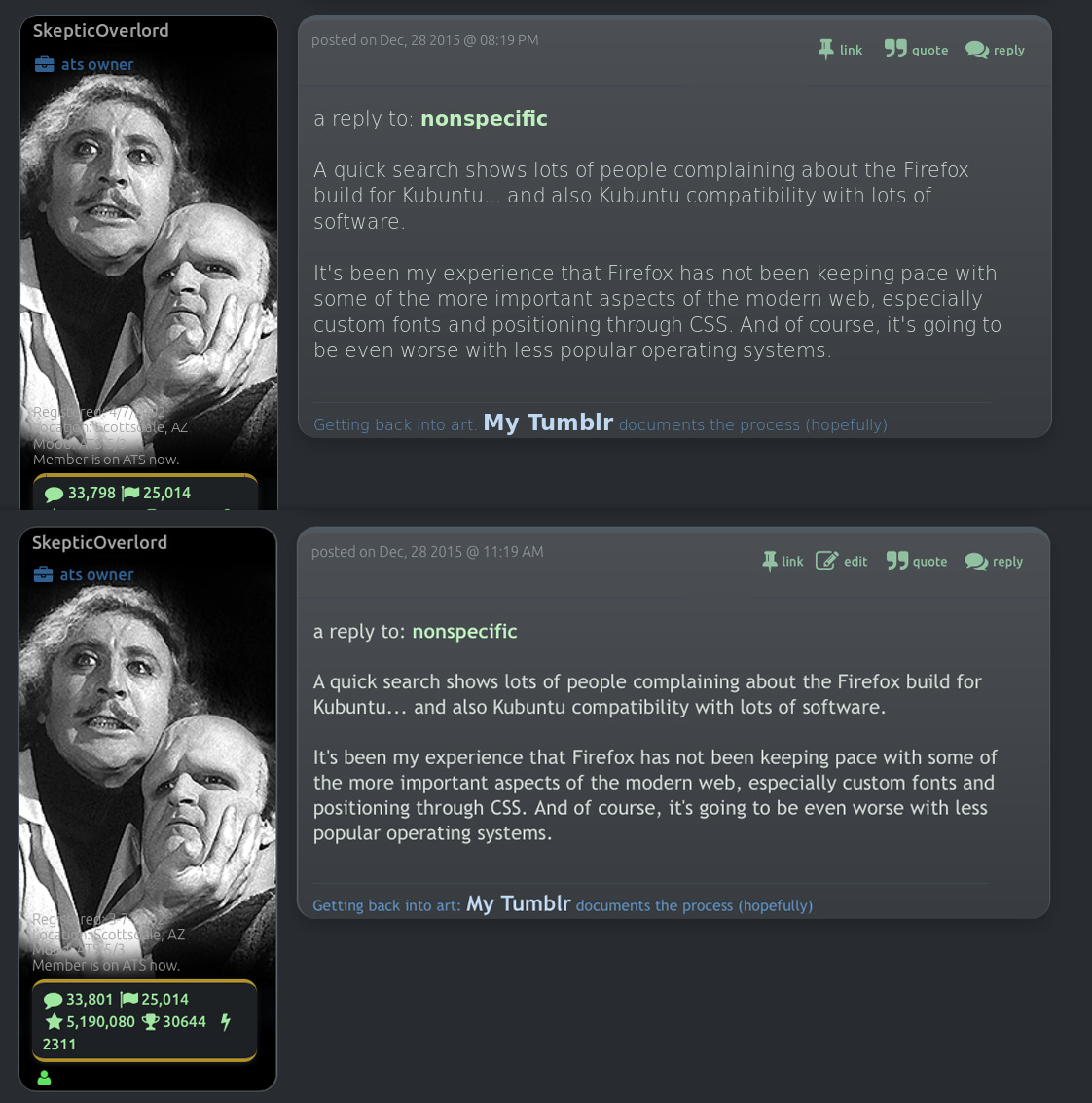 I'm on a Mac, using Safari -- which I think is the most stable/reliable browser for Macs.

Here's a thought. Highlight some of the text in the post, then right-click and select "Inspect Element." This shows you the rendered HTML, and the style definitions in a column to the right. The font should be Trebuchet MS... see if there's something overriding that.
edit on 28-12-2015 by SkepticOverlord because: (no reason given) 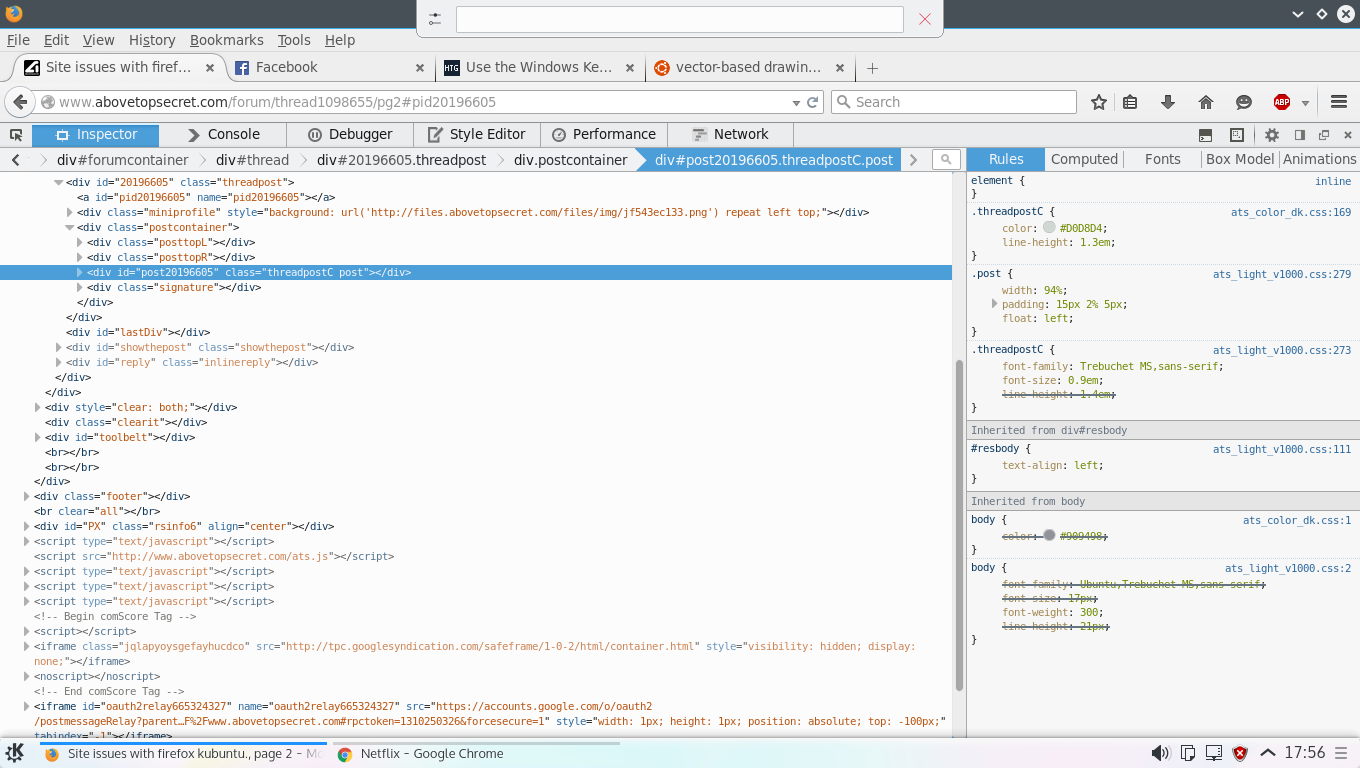 There it is. Some versions of Linux don't come with the MS core fonts. Here's how to install them: www.howtogeek.com...


originally posted by: nonspecific
I have just switched to Kubuntu and am having a few issues with ATS using firefox.

That's all you really have to say. Linux is always a mess.

Some releases are less messy than others. I have been using Linux mint for over 6 months with zero issues and now prefer it over windows. Mind you I still use VM Virtualbox to run windows software in sessions that I use for developing for windows.


originally posted by: nonspecific
I have just switched to Kubuntu and am having a few issues with ATS using firefox.

That's all you really have to say. Linux is always a mess.

Some releases are less messy than others. I have been using Linux mint for over 6 months with zero issues and now prefer it over windows. Mind you I still use VM Virtualbox to run windows software in sessions that I use for developing for windows.

First impressions for a free OS is looking good.

I have turned to the darkside and currently using chrome, suprisingly good to be honest.

Yes me too, chrome is lighter and faster than the competitors and hasn't given me any problems.

It was awful on windows 7 but seems to be pretty good in ubuntu.

Living and learning as they say.

posted on Dec, 28 2015 @ 01:52 PM
link
Can I put Ubuntu on my ipad2 air? I have more issues with safari than I ever had with Linux browsers. I will say that the ipad2 air hardware is good , very fast. But I miss apt.get😥Moving the curser in the text box on the touch screen with Safari, is impossible...

Everything in Windows has to go through M$ api's which got slower when they implemented glass so I don't think we can really blame chrome for its speed under windows, just the thousands of indian programmers that update the windows OS. Disabling glass in windows does help but Linux lime provides everything that windows offers, without all the headaches (and $). I originally used ubuntu but got turned off when they started to follow the M$ touchscreen user interface. Lime takes their feed from the Ubuntu server distro but implement their own user interface so they won't be forcing mouse users to use an interface designed for tablets (touchscreen).

For those of us somewhat challenged by browser setting...where would FF "hardware acceleration" be found?

Wipe the os and reinstall Ubuntu..

Yes sir-I didnt know much about it...just passed along there many be an issue. And dint know if it was across their boards, PC's or just mobile. Thanks

Thank you sir! Clarification and correction is always a good thing. MS

For those of us somewhat challenged by browser setting...where would FF "hardware acceleration" be found?


I have zero speed issues with FF or Chrome in Windows. They're both near instant when loading pages. I'm not sure what more a person can ask.

You sir? Are our "answer man". We have that all seeing eye on the dollar bill, ever watching for the greater good.

S.O.? You are our all seeing eye! And we're damn-glad your'e there to do so! Thanks. It's great to have you more visible and available to us these days!

Thanks....I had that checked...thought it was a good thing.
What does unchecking it do to help the issue??

originally posted by: rigel4
a reply to: nonspecific

Wipe the os and reinstall Ubuntu..

This is the route I would take if I did not know how to fix the font issue. I too believe its KDE not playing well with Firefox, either the font isn't being utilized or its just not included in the Kubuntu build that you are using. I have had little issue with the standard Ubuntu distro.

posted on Dec, 29 2015 @ 01:14 AM
link
All things considered, the usual reasoning behind running Kubuntu is to stay light on resource usage. IMO, Mint Mate 17.3 isn't much more of a resource issue and it's infinitely more stable and well designed - also based upon Ubuntu ( 14.4 LTS - running on a 3.* kernel still, rather than one from the 4.* family ).

If it were me, between the two, I'd pick Mint every time over either Kubuntu or Lubuntu.

Having said that, any Ubuntu based distro is going to require adding in the MS core fonts manually - either during install ( there will be a prompt ) or after getting everything else set up. All of the flavors and derivatives default to the Ubuntu FOS fonts.

As for Firefox? I'm like one of the last twelve people on the planet who still like and actively use it as a primary browser - though once edge gets plug-in support I may give it a shot. I *dislike* Chrome very much, so meh.
edit on 12/29/15 by Hefficide because: (no reason given)

Thanks....I had that checked...thought it was a good thing.
What does unchecking it do to help the issue??

Hardware acceleration in browsers has to this point caused more problems than it has cured. Turning it off will increase speed and smoothness, as well as prevent stalls and incomplete page loads that are due to using hardware instead of software. You should see a near immediate improvement most cases.