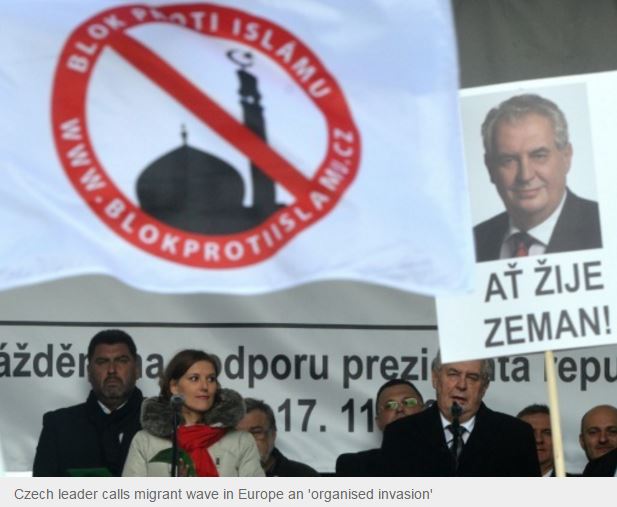 Prague (AFP) - Czech President Milos Zeman called the current wave of refugees to Europe "an organised invasion", adding young men from Syria and Iraq should instead "take up arms" against the Islamic State (IS) group.

"I am profoundly convinced that we are facing an organised invasion and not a spontaneous movement of refugees," said Zeman in his Christmas message to the Czech Republic released Saturday.

He went on to say that compassion was "possible" for refugees who are old or sick and for children, but not for young men who in his view should be back home fighting against jihadists.

"A large majority of the illegal migrants are young men in good health, and single. I wonder why these men are not taking up arms to go fight for the freedom of their countries against the Islamic State," said Zeman, who was elected Czech president in early 2013.

He added that their fleeing their war-torn countries only serves to strengthen the IS group.

Well, it goes without saying that he is stating the obvious but will others listen and if not, why not? Thoughts?

I actually am happy that so many have decided not to fight.
I would flee to if I concluded that my country was gone never to return, or faulty to begin with.
Violence without end in sight? No thank you. ME needs an overhaul, let the meek move out until it happens.

mamabeth
+33 more
posted on Dec, 26 2015 @ 10:24 PM
link
Hummm,young,healthy,single men of fighting age would not be fleeing to another country
unless they were fore-front of an invasion force.

Agit8dChop
+19 more
posted on Dec, 26 2015 @ 10:42 PM
link
lots and lots of young, fit, military aged men.. they just walked on in and not a bullet was fired. Look how clean all their shoes are.. look at the bottom of their pants.. we're expected to believe these people came all the way from the middle east and still look so clean and well fed..

Such a large group.. where were they 2-3 months prior? in large camps somewhere.. did they break out? did entire cities just empty over night? how did such a large gathering occur, so quickly? 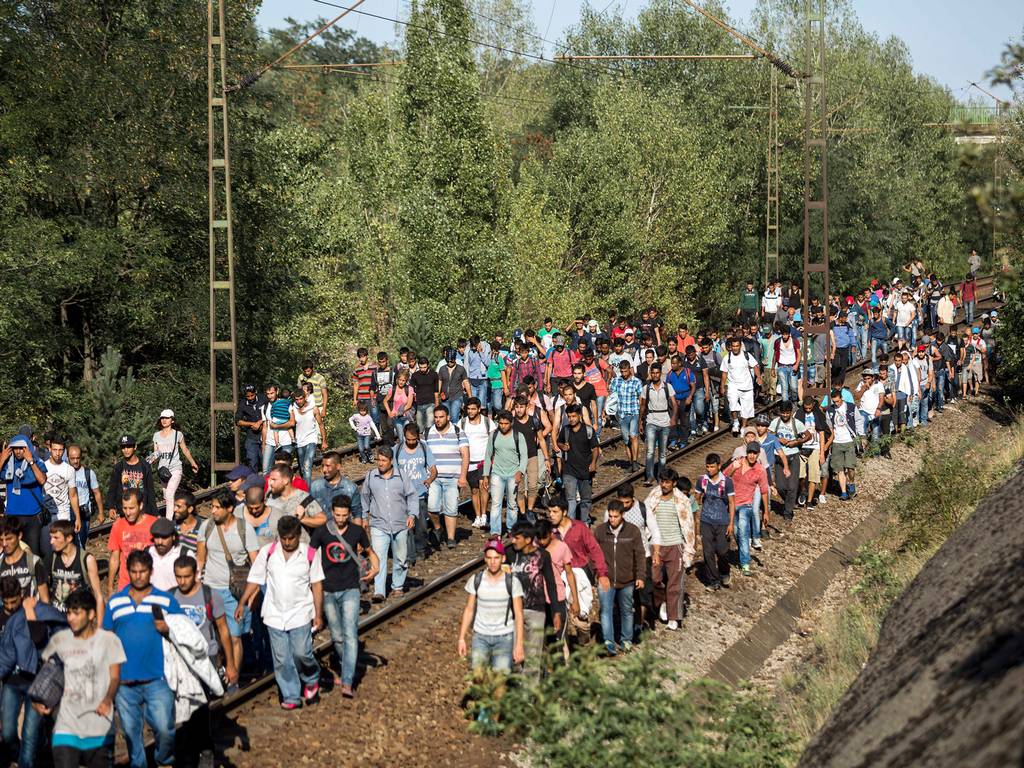 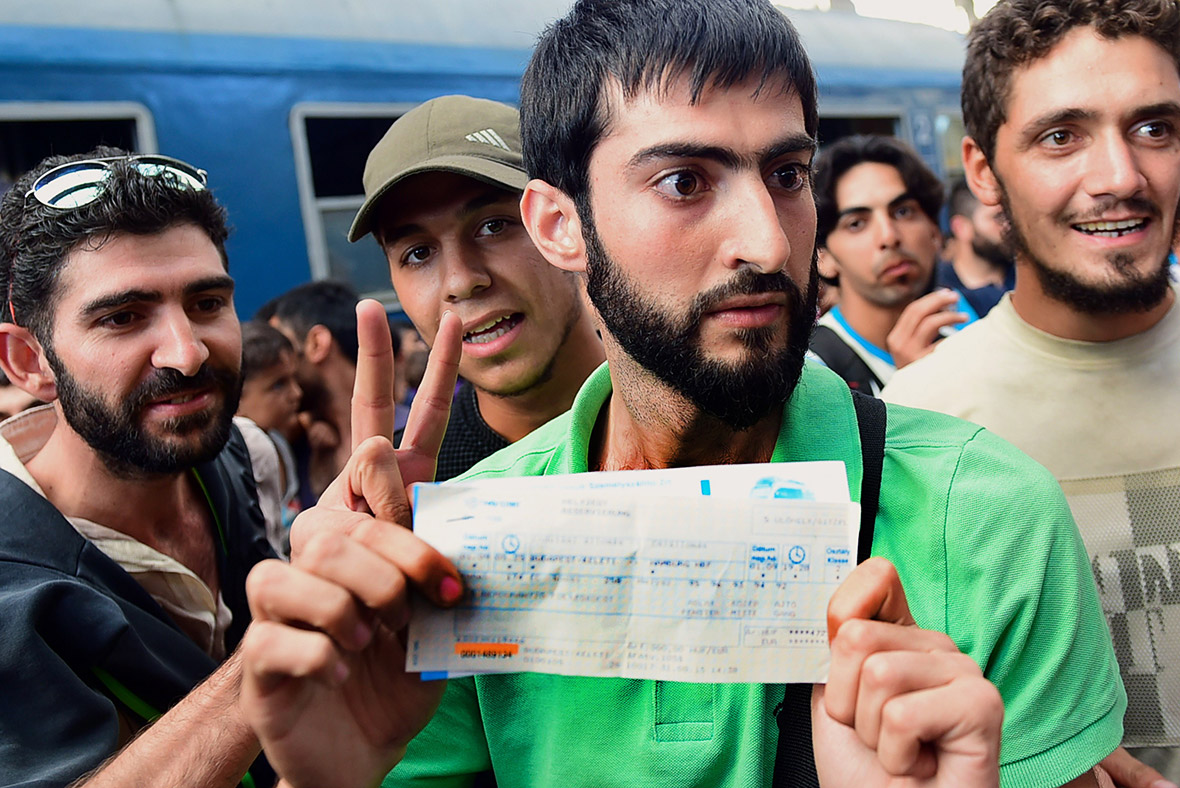 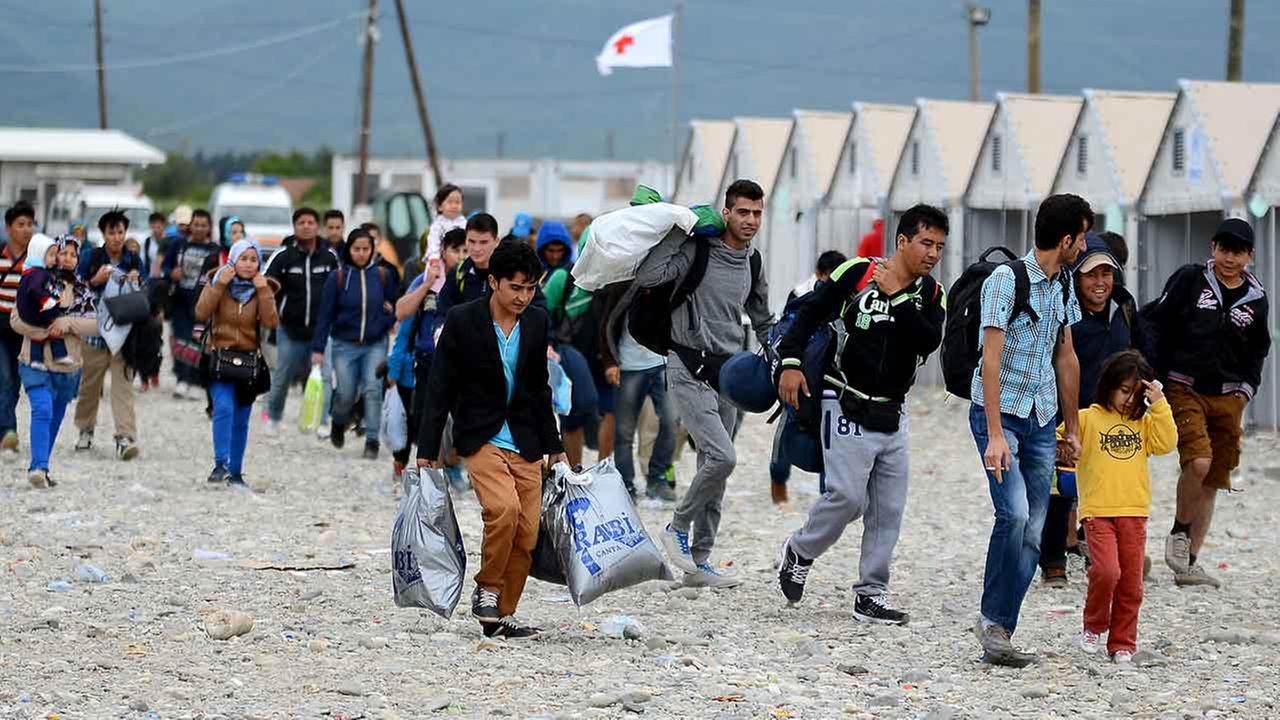 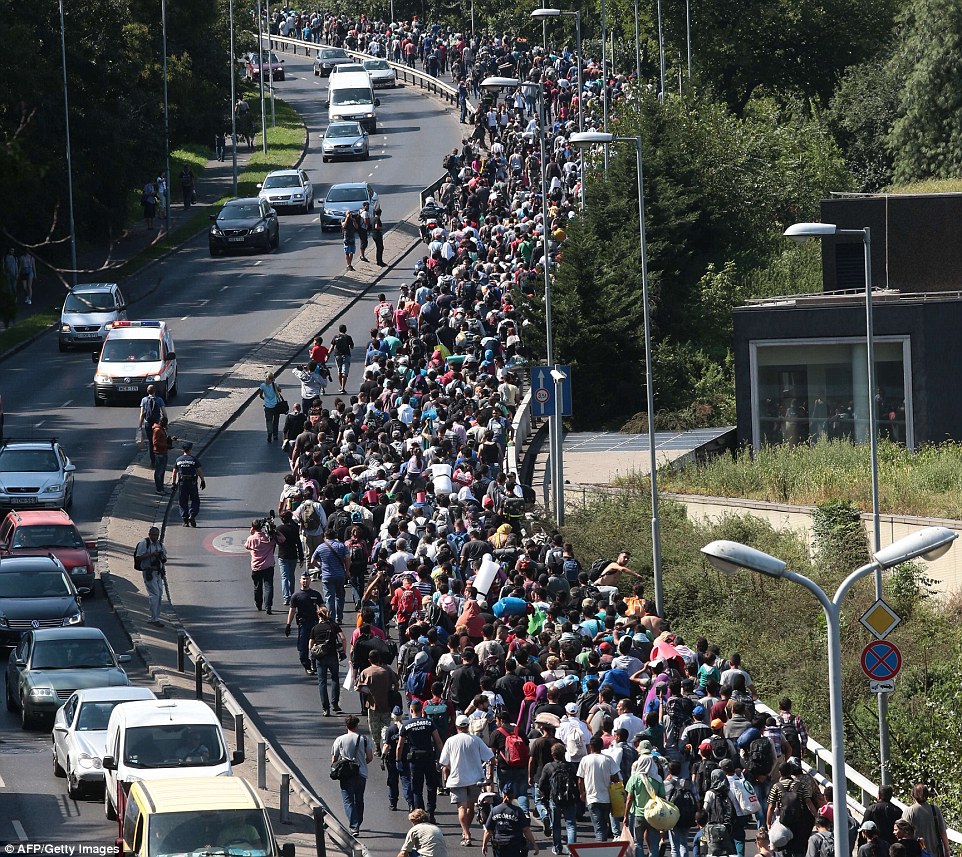 thats a sad/scary sight im sure for the passing cars.

Im all for helping people out but if i was driving by and saw that it would make me a little nervous to be honest.

im not sure how true it is but you read crazy things almost every day about what these people are doing in and to there hosts.

i read on here that some country is telling these people that rape=bad(like they didn't already know that), and you see videos of them demanding money and the horror stories from German hospitals.

like i said im not 100% sold either way, but i know for SURE there are a LARGE number of people just trying to save there own lives by getting the heck out of there.

Tiamat384
+29 more
posted on Dec, 26 2015 @ 10:57 PM
link
We Poles fought for our country even when it was under complete occupation of the Nazis and then the Communist forces! I say go fight for your country! Go back and leave us be.

Could you please provide a source for the photos you posted....

posted on Dec, 26 2015 @ 11:11 PM
link
Lol I've said this before, others have said it, now politicians are saying it. I'm not saying we are right, I am saying though if I had the type of influence certain powers and ideas implemented correctly had, this is how id use it nefsriously.

posted on Dec, 26 2015 @ 11:14 PM
link
Yes there cowards lol, living under dictators from father to son, then get bombed daily by murika and russia, add to that isis and a bunch of different millitias.

Common sense and reality have disappeared

Im impressed do, the daily the evil hordes, swarms of barbarian threads went quiet for a while.

originally posted by: Tiamat384
We Poles fought for our country even when it was under complete occupation of the Nazis and then the Communist forces! I say go fight for your country! Go back and leave us be.

You didnt exactly have a choice, however some of those that did run were trained, armed and then went back to fight for their country, I wonder if these will be willing to return and rebuild.

Also, noone here has been forced from a warzone so we cannot comment on weather we would fight or run, if there is no cohesive strategy and you dont know who the enemy are, who you going to fight?

As for it all being the young men, I would send my young son ahead too, because if those camps get overrun, its unlikely the old ladies and men will be massacred, but every threatening male of fighting age will be.

Anyway, as I have personally not seen a column of refugees I cant comment on whether they are all young men or this is just propaganda and selective reporting.


Tiamat384
+10 more
posted on Dec, 26 2015 @ 11:20 PM
link
a reply to: Forensick
We could have run or hid like these cowards. Some did. But ultimately? We fought. Against the greatest army. They would kill everyone. Cowards. Fight for your country or die. I know I will be criticized. This site has taught me. Dont share your opinion if its a minority. I'll still do it. Attack me. (Not directed at you)

originally posted by: Tiamat384
a reply to: Forensick
We could have run or hid like these cowards. Some did. But ultimately? We fought. Against the greatest army. They would kill everyone. Cowards. Fight for your country or die. I know I will be criticized. This site has taught me. Dont share your opinion if its a minority. I'll still do it. Attack me. (Not directed at you)


Canada as had over 150 000 poles who immigrated to canada, because of war, poverty and persecution, should we send them back.


At what point do they need to take responsibility for their own countries ?

hutch622
+4 more
posted on Dec, 27 2015 @ 12:04 AM
link
Thing is , if my country [Australia ] was war torn like Syria i would not be running away , i would stay and fight for what is best for my country and i can guarantee it would not be on the side of any batcrap crazy religious group . Women children and the elderly can leave , but i guarantee you i would want them back once the war is over . There would be no running away , it would not be an option . Never . If these people dont like Assad and dont want to fight for him , join the other side .

They are not specifically Charlie's problems as he is British but if you're implying that it's a problem that Muslims in that area of the globe should be fixing then yes, I agree.

Don't blame Charlie. He's just a convert who was even told by four Muslims not to convert. Sorry Charlie.

Edit. There are many Muslims fighting ISIS, just not these guys.
edit on 27-12-2015 by Wide-Eyes because: (no reason given)


Islamic men from iraq fought against trillion dollar financed military forces from America, UK,Canada, Germany, Australia, Turkey, Kingdom of Tonga, Sweden, etc. And I'm not even talking about military defectors after MNFI-MNCI dissolved Iraqs government, I am not saying any of those warriors are Islamic terrorists. They just didn't want to be invaded. Of course most of them were crushed but they still fought, what are these guys problem not enough fiki fiki mono a mono unless they chased their boyfriends across the border? I dont want to hear fascist or homophobe complaint either I fought over there in iraq multiple tours spent most of my late teenage years there throughout my early twenties, and that was some issues with not only the new army in Iraq but also the police force at the barracks level. These men should be considered a threat. Since when is leaving all your women at home the right thing to do? Hey since when is because you are scared a good excuse to leave your way of life?

Can someone show me a modern catholic problem? Islam needs to reform within itself, some claim they are not all about the terror stuff but is there a comparable belief system militant group any where else on the planet?