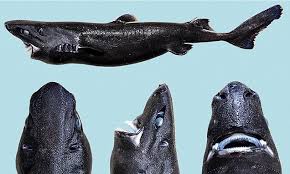 Whats Jet Black?
Glows in the Dark?
Is 19 inches long?
And is named after Jaws author Peter Benchley?


Etmopterus benchleyi, also known as the Ninja lanternshark is a lanternshark of the family Etmopteridae. It is found in the eastern Pacific Ocean from Nicaragua, south to Panama and Costa Rica. The depth range of collections is from 836–1443m along the continental slope. This species is distinct from other members of the E. spinax clade in having dense concentrations of dermal denticles closely surrounding the eyes and gill openings. E. benchleyi is the only Etmopterus species presently known from the Pacific coast of Central America.[1]

Its amazing to me how many deep sea creatures of different classes independently developed Bioluminescence.
This lil critter was originally to be named SUPER NINJA SHARK, but they toned it down, likely to make some stodgy egghead types happy.
It can grow up to half a metre long and is the first species of lanternshark to be found in that region of the Pacific, which stretches from Nicaragua to Panama.

It kind of reminds me of a bull shark pup that had died and washed up on shore, only to get cooked by the sun for a few days.