posted on Dec, 23 2015 @ 10:26 AM
link
Holy Crap! You have to see the videos below. How could anyone think that dressing up in arab costumes and throwing backpacks at people and into cars is a good idea?

One of the Idiot pranksters has now been shot!

A few days ago, there was a story on these idiots. I guess because they were in Australia they thought they would not get shot doing this BS. They were wrong.

In the US, I doubt they would have made it to 4 videos.


The Jalal brothers recently gained massive notoriety after posting a series of videos to Facebook where they dress up in Arabic-style robes and hurl suspicious parcels at random strangers while running off and sparking panic in their targets. The brothers, a group from Melbourne, Australia, call themselves the Jalals and just yesterday posted their third bomb scare prank video. The reactions they get are typically the same – the victim running away in sheer panic whether out of their vehicle, up an escalator, or even into a body of water.

This time, however, they apparently got a different reaction while filming for their fourth video. One of the brothers, Arman Jalal, was shot in the stomach after ‘pranking’ the wrong man. The incident occurred late Tuesday night in a parking garage in East Melbourne. The brother is said to be in critical but stable condition at St Vincents & Mercy Private Hospital.

The man they pranked, Scotty Southam, 31, is currently being questioned by Victoria Police but there are reports that he will not be charged.


t
The 'Jalals' are a group “entertainers” made up of three brothers Max Jalal, 19, Arman Jalal, 18, and Rebeen Jalal, 16, who said they like doing pranks “out of the ordinary”.

“We like doing pranks and this one is crazier than the usual thing you see,” Max told Yahoo7.

The viral video shows a man dressed in traditional Arabian clothing throwing a bag - meant to be a bomb - near a random member of the public, capturing their reaction.

One man, wearing construction clothing, had the bag thrown into his hands and was so scared he ran into a nearby reservoir.

Another man launched out of his car after the bag was thrown into his vehicle by one of the pranksters.

“I’d shoot you without hesitation. It’s funny until you’re dead, " one user wrote on Facebook.

“A lot of people are afraid to leave their homes because of this exact reason. I can take a joke, but this is not a joke.”

I posted this in the joke forum the other day asking if they had gone to far and the general consensus was that they were lucky no one got hurt.

It did make me laugh in truth but at least it was one of them that was hurt and not one of there unwitting victims.


I must admit, the video's cracked me the hell up, but it was bound to happen.

Divine intervention and Natural Selection will get chya~ almost every time....

Besides Darwin Awards should be coming soon, I hear the trophies this year are quite large

posted on Dec, 23 2015 @ 11:29 AM
link
I saw their latest video yesterday on Facebook (first time seeing one or hearing about anything like it) and I hate to admit it because I felt like scum for it...I laughed and hard about the people's reactions but logically I knew it wasn't funny at all and that someone either themselves or someone they scared was going to get hurt or killed, not to mention the sterotyping reinforcement (regardless of their own ethnicity or religious beliefs) or PTSD triggers for vets and people who have had to live under terrorism in their native lands.

I'm not surprised at all that one of them got shot.

Still, I hope he turns out okay and it seems perfectly reasonable for the man that shot him NOT to be charged with anything. 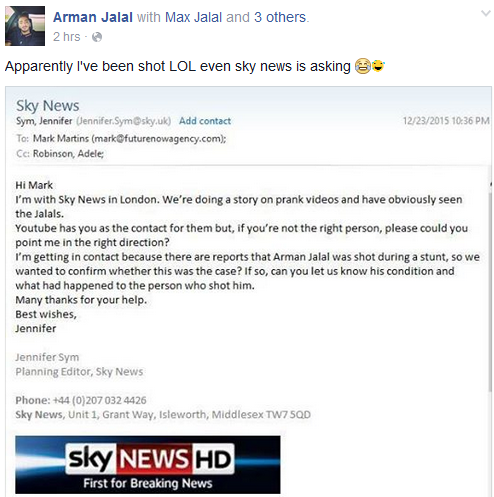 originally posted by: stosh64
Appears this may be a hoax. At least according to Arman Jalal's facebook.

weaksauce, they were probably behind it... MOAR CLICKS

ITS JUST A PRANK BRO

I will just say I am NOT a fan of these type of videos, and will not be surprised if and when this is NOT a hoax story.

Still only a matter of time before someone actually does get hurt.

That's to bad if it was a hoax. If any deserved to be shot it would be one of those losers pulling a stupid "prank" like that.

I've never seen people run like that before; crazy what adrenaline and fight/flight can do for ya in a situation.


maybe none of the victims were hurt physically, but what about psychological damage???? it was only a few seconds but these people were scared #$%^less...they could be having nightmares, or other kind of reactions down the road

So these jackwads didn't have the credibility to even post the video of one of them getting gunned down? If you're going to pull this kind of stunt, you MUST post the footage of it all going horribly wrong. At least that's the way I see it.

posted on Dec, 23 2015 @ 12:52 PM
link
Hoax or not, I wouldn't feel sorry for these idiots one bit.
There is pranks and then there is just plain asking for trouble.

The other group of morons I've been waiting to hear get shot for pranks are those guys who go into black neighborhoods and pranks thugs in various ways.
The end result is often getting punched or chased all the while screaming "chill out it's just a prank".
WTF did you think was gonna happen dunbass!

One video I seen was a white guy dressed in a KKK outfit going around Compton or some such are and asking for directions to a rally.
I couldn't believe he didn't get his ass beat or killed.

Growing up, I liked pranking. Hell, still do. I don't prank in ways that would hurt people, because I feel that's taking it too far, but I do prank. Example, sometimes I like to pretend I forgot the keys in the house and we locked ourselves out. My wife knows better, unfortunately.

When I was younger, though, I pondered doing something similar. Dressing in black, and taping a clock to a pipe and being an ass with it. I never did it, not only because it's not nice, but because I knew that if I got caught, I could risk being locked up for creating panic, and/or a false bomb threat.

So I'm curious, why do these people not get in trouble?? What they're doing is equivalent to calling in a bomb threat, and they're creating a panic. Can't they get in trouble for this?? I mean, the proof is right there, video evidence.

I was considering the fact that severe injury or death could occur buy one of the prankees... I imagine if somebody died as a result from a heart attack or otherwise they would be facing manslaughter charges. Clearly these kids have not thought about the consequences.

maybe for their next prank they could go to Harlem dressed in KKK outfits and put a noose around peoples necks.

To quote forrest gump: " stupid is as stupid does"