Real Proof Moonlandings were Not Faked

posted on Dec, 10 2015 @ 10:36 PM
link
Many Folks are under the impression the Moon landings were faked by Stanley Kubrick and others, and that we never went to the Moon.
This Video will finally put all that to rest. We went to the Moon...No Hoax

if Video doesn't load? follow link, its worth watching
www.youtube.com...

originally posted by: NowWhat
a reply to: SPECULUM


No because it wasn't faked

posted on Dec, 10 2015 @ 10:47 PM
link
My favorite part about that video was him commenting on Stanley Kubricks inability to make a believable moon set.
It's true that video footage was fairly awful back in the 60's comparatively to now.

It's hard for me as pilot to image us going to the moon back in the 60's given the technology I personally use now, but also being a pilot, I'm more likely to believe too that we did just because it's an awesome story and it's beautiful in itself.

originally posted by: NowWhat
a reply to: SPECULUM

If anything ought to be in LOL, it's the idiotic moon hoax threads. No such thread has ever proven that the moon landings were fake, because they weren't. We went to the moon. Deal with it.


watch the Video, and you'll understand why they weren't faked

posted on Dec, 10 2015 @ 11:25 PM
link
The simple proof as to whether the Americans went to the moon or not is the fact that the Russians had a probe there to watch them. There is no way what so ever that the Russians would have let them get away with a hoax like that. And besides, the Apollo modules could be seen with the naked eye from the ground I believe before they left for the moon. People took more risks back then. The first American in space went up in a modified V2 missile (Redstone) there's some guts for you.


Ahh there is something worse than threads about USA hoaxing moon landings, and it's the above...
LOL!

When I was there I took this photo for proof. You know, pics or it didn't happen.... 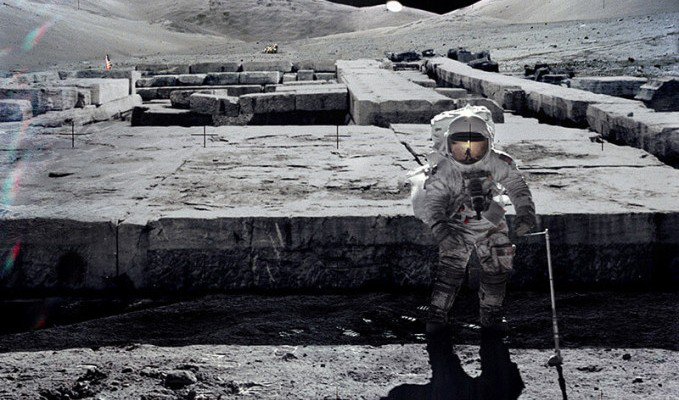 Seriously though, we went and you can see the materiel left behind from probes around our moon from other countries. If anyone thinks they were faked, do you honestly think Russia and China, as for many other countries would be shouting it from the rooftops and showing evidence to the contrary? They would, except that we were there!

posted on Dec, 11 2015 @ 12:53 AM
link
I really can't imagine how anyone believes the moon landings were hoaxes. Anyone there at the time ought to know better! come on, look at Trek, for example. That's what we had then. Even the best sci-fi, with bigger budgets, didn't look like the real thing. The guy in the video seen him before) is correct in that regard. Plus, as stated, the Russians would have said something if it wasn't real. No way they'd have allowed a phony landing to go unchallenged.

Can anyone explain the obsession with the fake claims? Seriously. I can see wondering what else is there, what they might have covered up, and so forth, but I don't get the "we never went" mentality.

There's a vast amount of "evidence" which "proves" that the moon landing was not fake.

Anyone who thinks that the Americans lacked the technology to go to the moon has little understanding of the Cold War arms race. And hiring a world-famous director to do it? Making everyone in NASA or associated with NASA keep their silence? Ah yeah but I'll get ripped apart for saying that it wasn't faked, I'll get bombarded with youtube internet superhero "truth" speakers, and I ain't got time for that.

No matter what evidence you produce in favour of the moon landing, there'll be some internet warrior with a PhD in Googling ready to beat you down until you stop caring about the whole thing.

posted on Dec, 11 2015 @ 01:41 AM
link
For the younger members of ATS, I can see how hard it is for some to rationalize the level of technology that was available in the 60's. You really have no experience with it, and that is totally understandable.

See that P3 to left, as my Avatar? That was developed in the 60's. Myself, and certainly a good number of others here in this forum spent a good number of years in that bird, as well as many like it from the 60's into the 70's. We will tell you that we are still, to this day, amazed at the technology that was inside these machines, and many will certainly attest to the fact that we certainly had the capability to not only go to the Moon but so much more.

We are living this legacy today. Take that information in confidence, for what is is worth. Your children's children will have the same healthy skepticism on what our capabilities were in the present day.

originally posted by: DeepThoughtCriminal
There's a vast amount of "evidence" which "proves" that the moon landing was fake.

There's a vast amount of "evidence" which "proves" that the moon landing was not fake.

Actually, your first line is false, your second line is true.

The evidence we did go to the moon is overwhelming.

The evidence that we faked it is both lacking, and has been debunked at every turn.

That's it. Since the OP can't provide any video evidence that proves we went to the Moon, I am forced to acknowledge that Stanley Kubrick was telling the truth.

Man has never set foot on the Moon. True fact, unless someone can provide a link that isn't broken as hell that proves otherwise.

We placed mirror arrays on the moon. If you have a strong enough laser you can hit it and see it come back to you. Seriously. Look it up. Does anyone that believes it was faked do their research on anything but Youtube?