Insane Police Chase and Shooting (of Suspect) in Downtown Seattle

I put this in the Posse Comitatus Forum, however, I just want to point out that I don't necessarily disagree with the choice to use deadly force. I think if anything, a less confrontational option (helicopter pursuit?) might have been resulted in a better outcome (less risk to citizens), but I think in the end it probably would have ended up the same given the history and actions of the man being chased.

In this event, a guy driving a Corvette gets into a high speed chase that lasts a good duration, he puts numerous people's lives at risk, and also a number of people sustain damages to their property (and possibly injury).

To note: I don't want to try and put this in here like it's cop bashing. I don't think anyone else could have really made any better decisions. This kind of thing may be solved long term possibly, by changing the climate of criminal behaviour & police conduct in the country. There are a number of things that breed this kind of violence, and the militarization of police breed teams ready to chase suspects through one way streets in mid day traffic (Seriously, what happened to helicopter chase to keep them from putting people's lives at risk?) But again, hind sight is 20/20, and as per the individual officers involved in this event, its hard to say any of us could have made better decisions on the fly.

They were dealing with someone who has a history of violence, who was putting people's lives at risk, who was willing to do whatever with wanton disregard for anyone's safety. Their actions are justified no question about it. The only question is a long term question, and it falls on society's as much as it does on the police, and that's what can society do as whole, to bridge the divide between anti-scocial elements who choose this behaviour as a means for conflict resolution.

The only thing I find extremely disconcerting is at the very end, the suspect is surrounded, he's smashed multiple vehicles with his own, he begins revving his engine and burning out, in this case he seems prepared to use his car as a weapon, police open fire. Case closed right? By all means its justified and I don't really dispute that.

The only thing that bothers me is there is an innocent woman in the car next to the suspect, and she appears to be in crossfire, though she gets out of the frame so we can't exactly see her when it happens. If Im wrong and she's out of the way, by all means ignore this. Innocent people being injured or killed from police gunfire is something that has happened in a lot of publicized shootings. To me that seems unacceptable.

The suspect was a 'violent felon', information below:

Published on Dec 7, 2015
Seattle Police Department investigators are piecing together the trail of a 35-year-old violent felon after he brandished two handguns at several downtown businesses Sunday, carjacked three vehicles and fired on officers before a fatal confrontation with police in Northeast Seattle.

I agree that the shooting was justified, but as you said the shooting was reckless. There were several officers much closer to him that were more than capable of safely firing. Most of them were too far away to aim accurately with rapid fire as they did. I bet there are more than a few bullets that went into homes.


(Seriously, what happened to helicopter chase to keep them from putting people's lives at risk?)

originally posted by: boncho
In this event, a guy driving a Corvette gets into a high speed chase...

That was Camaro. But either way I am not surprised based on his previous history.

That whole chase and execution was reckless. The cop close on the 'bad' guys heels was doing everything he did endangering the public even more. If they weren't chasing him he would slow down and not drive so recklessly, instead they flash lights, wail sirens and drive down the wrong way (honking horn) at 50 miles an hour, too. Geez, we got a BOLO, lets not endanger the public too much, he'll turn up.

And then 50 plus rounds down range, what background? What he do, not pull over, not give up?

Kill him if he doesn't get out. Why he probably didn't get out, he knew they'd kill him, either way. In a fight or flight panic, he chose flight.

These kind of scenarios guarantee only one outcome. Killer cops.
edit on 8-12-2015 by intrptr because: spelling

Ended the way it probably was going to, regardless of how the surveillance went down.

On a side note, those side air bags really create a level of uncertainty as to what the occupant could be doing in there at that moment. I wouldn't want to be on the outside looking at that wondering if/when the first bullets were going to be flying out from inside--I mean, the dude apparently was shooting at the officers during the pursuit.

Like I said, I doubt that this would have ended any other way, and I disagree that a looser means of surveillance would have definitely yielded better results. Hell, that could have allowed him to take hostages somewhere, or park somewhere inconspicuous and flee on foot without being captured immediately.

But playing the what-if game is pointless...I think the cops lit him up at the appropriate time. I'm just glad that the occupant in the SUV behind the Camaro exited her vehicle before the bullets started flying.

They sort of created/forced the situation that led to a deadly shooting. Was getting him right then important enough put so many at risk?

ETA: I don't have audio so maybe I missed something. Did the bad guy kill someone?

originally posted by: intrptr
In a fight or flight panic, he chose flight.

In the words of a famous knight, "He chose poorly."

These kind of scenarios guarantee only one outcome. Killer cops.

The what-if game isn't appropriate usually, but with this mentality, let the guy take off again and then what? Keep the public roadways in danger of someone in a structurally damaged vehicle attempt to continue fleeing at high speeds who was already shown to be so reckless that he fires at LEOs while driving?

Yes, that would have probably worked out much better for all involved.

LEOs jobs necessitate killing at one point or another--if you can't accept that it is generally the fault of the suspect that takes it to that point, it would seem that you are in denial of reality.

Geez, we got a BOLO, lets not endanger the public too much, he'll turn up.

Yes, but turn up where, doing what, and after what drastic measures were taken by him. You pretend like it's the LEOs' fault that this guy is a violent felon who refuses to submit and instead chooses to put the public in danger. You don't know for a fact that he wouldn't drive that way without a cop on his tail (although it is unlikely), but you don't know. You don't know what he'd do with the extra time without law enforcement present, assuming that he'd eventually turn up at all without doing something else illegal, too.

BOLOs don't always result in apprehension and proper surveillance, so to pretend like that is the best answer is not intellectually honest concerning these types of situations.

Like I said in another post--why is it so easy for some to disregard the personal responsibility of the criminal in these instances?

And that is why you wear your seatbelt, you never know when a Cop Car is going to ram another car into you, LOL

That was pretty insane and I also liked the end after the car was stopped the other cop still rammed it then the lady running after her moment of WTF? Crazy.

I wonder if high speed chases like this will become justification to enable drone deployment across the nation?


(Seriously, what happened to helicopter chase to keep them from putting people's lives at risk?)


Not to mention that drivers still drive erratically and evasively when a helicopter is trailing them...

The only thing that bothers me is there is an innocent woman in the car next to the suspect, and she appears to be in crossfire, though she gets out of the frame so we can't exactly see her when it happens. If Im wrong and she's out of the way, by all means ignore this.

The lady got out of her car and hauled arse down the street prior to the bullets flying.

This is several seconds before the shooting. She was likely far away of the cross fire. 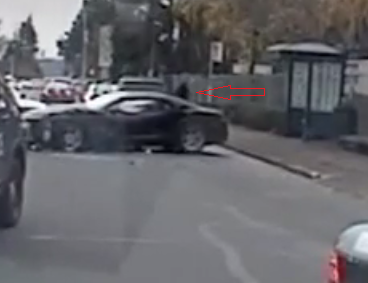 This is several seconds before the shooting. She was likely far away of the cross fire.

How fast can a human run?

How fast does a bullet go?

If the cop were shooting at the innocent person running away, you might have a point.

But, he was shooting directly at a car trying to run him down and was reasonable certain he wouldn't harm innocent folks in the vicinity.

So yeah.. several seconds count in his decision making process.

If the cop were shooting at the innocent person running away, you might have a point.

But, he was shooting directly at a car trying to run him down and was reasonable certain he wouldn't harm innocent folks in the vicinity.

So yeah.. several seconds count in his decision making process.

I'd rather it be absolutely certain.....

originally posted by: IslandOfMisfitToys
How fast can a human run?

How fast does a bullet go?

Maybe she was from Krypton.

I'd rather it be absolutely certain.....

Ideally, yes. I'm pretty sure this was not an ideal situation.

Do you think he should have just let the Camaro run him over then because he wasn't absolutely certain?

I am of the opinion that cops should not be allowed to engage in high speed pursuits.

If the law as applied to me is black and white due to public safety, that is that. Public safety can't be discarded in the interest of nabbing a suspect. His arrest isn't worth the risk.

From what i've seen of previous engagements of this sort, "directly" is a very loose term. officer's can be horrible shots. imo.

glad no innocent bystanders were harmed.

See furrytexan's post as it clearly spells out the way I feel also.
edit on 8-12-2015 by IslandOfMisfitToys because: (no reason given)

But that's not what what we were discussing.