The San Bernardino Killers had a couple of legal weapons, the rest were illegal. If they were all illegal, would that have changed the outcome of the attack. Not just no, but Hell no! Are people really this dumb?

Democrats fall all over one another rushing to demand new gun-control laws every time a criminal (usually a liberal) uses a gun to commit a crime. But what about suicide vests? Surely Democrats are concerned about the much greater potential for harm that these horrible devices pose? Yet, we’ve heard nary a peep from them about Suicide Vest Control,” reads the petition urging immediate action to correct this apparent slip-up in the war on terror, both international and domestic.

Sounds like a case of since gun buybacks work so well maybe we should start them for crack and heroin too in an effort to win the war on drugs. 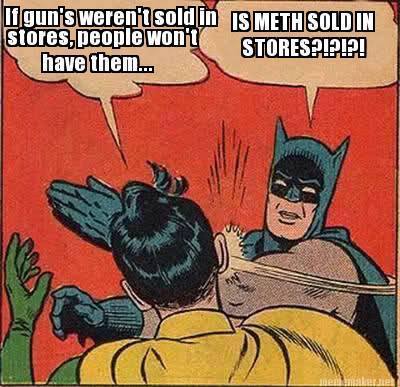 Be prepared for this:
So if a law doesn't work, should we get rid of all the laws.

I know. I agree with your post, but this is the crap ass response you will get.

Hey you never know, you might save the world. lol

I personally think Less is more where the laws are concerned. Too many laws just plug up common sense. Im sure I will get a load of happy bloggers on that statement. lol

The petition, likely more political commentary rather than genuine, has 11 supporters as of Thursday afternoon.

I agree with you that more laws aren't going to help, but using this stupid article to shame Democrats is... well... stupid.

I know, I was trying to be funny. I only reposted the article and my intent wasnt to shame democrats. I would have made fun even if it would have been a republican, tea party, libertarian or a constitutionalist. Dumb is dumb no matter whose court the ball is in.
edit on 6-12-2015 by misskat1 because: (no reason given)
edit on 6-12-2015 by misskat1 because: Added to my reply.

posted on Dec, 6 2015 @ 09:59 AM
link
There was a person hurt in a terrorist attack in a London tube station with a machete. We need machete and knife control now!

Is it really right that somebody can walk into any supermarket, department store or hardware shop, buy one or more dozen sharp kitchen knives with blades over 12" long without any oversight as to whether they really are going to be using them for food preparation or for nefarious purposes? This loophole could be solved if we have a national kitchenware approval board to determine whether or not somebody really needs a sharp blade. The person fills in a form, available both online and by post, submits it along with suitable ID, and then within 24 hours, a purchase approval certificate is sent back. This is taken to any supplier and the relevant items purchased or delivered by post. This would truly make the country a far safer place.

originally posted by: Benevolent Heretic
a reply to: misskat1

The petition, likely more political commentary rather than genuine, has 11 supporters as of Thursday afternoon.

I agree with you that more laws aren't going to help, but using this stupid article to shame Democrats is... well... stupid.

Stupid is an accurate description as this stupid piece was written for stupid people. Their last comment is quite fitting.

Hey, they see me trollin…

Where's the petition to ban micro aggression? Terrorists hurt my feelings and offended me.

Look, it's a dumb petition because making and/or possessing unregistered explosive devices is already illegal in this country.

And yes it does matter whether or not the gun purchases were legal because it allows us to go after those making the illegal sales and shut them down.

It might not change what already happened, but every time we shut down another illegal source of guns, it lessens, however slightly, the chance that the same thing will happen again.

It also allows the victims of gun violence another avenue to seek compensation for their suffering that was the result of an illegal gun sale.

I find it quite odd that in most cases, the very people who want to remove all barriers to gun ownership are the same ones building barriers to prevent women's access to abortions, despite the fact that both are legal acts.

How about we make guns as hard to get as abortions?

Your graphic is slightly ironic. Yes Meth is sold in stores. Its brand name is Desoxyn. There are a few million prescriptions for it every year.

posted on Dec, 6 2015 @ 10:10 AM
link
We need to ban them in order to start the buy back program. Once people realize how dangerous their suicide vest are they will eagerly turn them in I'm sure. Besides that think of the valuable tool you give the suicide bomber prevention hotline when they can offer a safe alternative to blowing yourself up in public. Kudos to this forward thinking Petition.

Some funny comments in the petition link.

Nothing stops a suicide bomber like the threat of going to jail.

Most suicide bombers use backpacks. Should we ban those too?

Neo mentioned this in my thread, i think, if it's body armor they mean. Or fishing vests. Or fanny packs. Or whatever.

Washington, D.C. – A new piece of legislation was introduced in the House of Representatives, H. R. 378, labeled the Responsible Body Armor Possession Act, which if enacted would deprive law abiding citizens of another means of self defense. Read more at thefreethoughtproject.com...

Seems someone may have taken this too seriously: In The Know: New Iraqi Law Requires Waiting Period For Suicide Vest Purchases

Ive heard people say they would rather die than go to jail. Maybe that explains why they commit suicide. (sarcastic)

I saw the humor in your post. Sadly, everyone gets their feathers ruffled over EVERYTHING any more. Personally calling somebody's post stupid is a worse offense to me. /Shrug

Your graphic is slightly ironic. Yes Meth is sold in stores. Its brand name is Desoxyn. There are a few million prescriptions for it every year.


Heroin should have been used instead.
A doctor can't prescribe it and it isn't available in the US legally. But you can buy it down on the corner.
A war against illegal guns would have similar results to the war on drugs.

Desoxyn is a controlled substance, and requires a prescription. It isnt over the counter, so no you cant just go get it at the store.

What I know about it is that is most similar chemically to codeine. Codeine is available by prescription.