posted on Dec, 5 2015 @ 12:37 PM
link
Active hostage situation still ongoing in Neenah, Wisconsin. Man apparently walked into motorcycle shop and fired at least 30 shots which injured someone, who was taken to the hospital, but the man took everyone else hostage in the shop. Swat is on the scene and Neenah Police say it is a "high-risk" situation.

Posts from the source above

The Neenah Police Department just posted this to Facebook:


We want to extend our perimeter. We ask anyone in the area to move back at least 1/4 mile for your safety.

Dean Kaufert, the Neenah Mayor just spoke with us. He says this is still an active situation.

He tells us several shots were fired, he said 30 or more.

This incident is taking place at the Eagle Nation Cycle shop on Main Street.

Kaufert says one person one transferred to a hospital. We don't have an update on their condition.


He also says there are people in the basement on the cycle shop.

We will continue to bring you updates as we learn them.

The Neenah Police Department just posted this to Facebook:

We've evacuated a number of homes and businesses in the area. Working to maintain safety. Please continue to stay away from the area.


FOX 11's Lauren Kalil is on scene. Lauren tells us there is a lot of police presence outside the Eagle Nation Cycles shop.

The Neenah Police Department says they are monitoring a high risk incident in the 200 Block of Main Street.


Our crew on the scene says two blocks of Main Street going from Torrey all the way up to Wisconsin are completely blocked off.

There are multiple armored vehicles on site.

Officials say there has been a report of at least one possible shot fired -- they are working to make sure everyone is safe in the area.

Police are urging people to avoid the Main Street area between downtown and the bridge.

We will bring you more information once we get it.

A photo from the scene 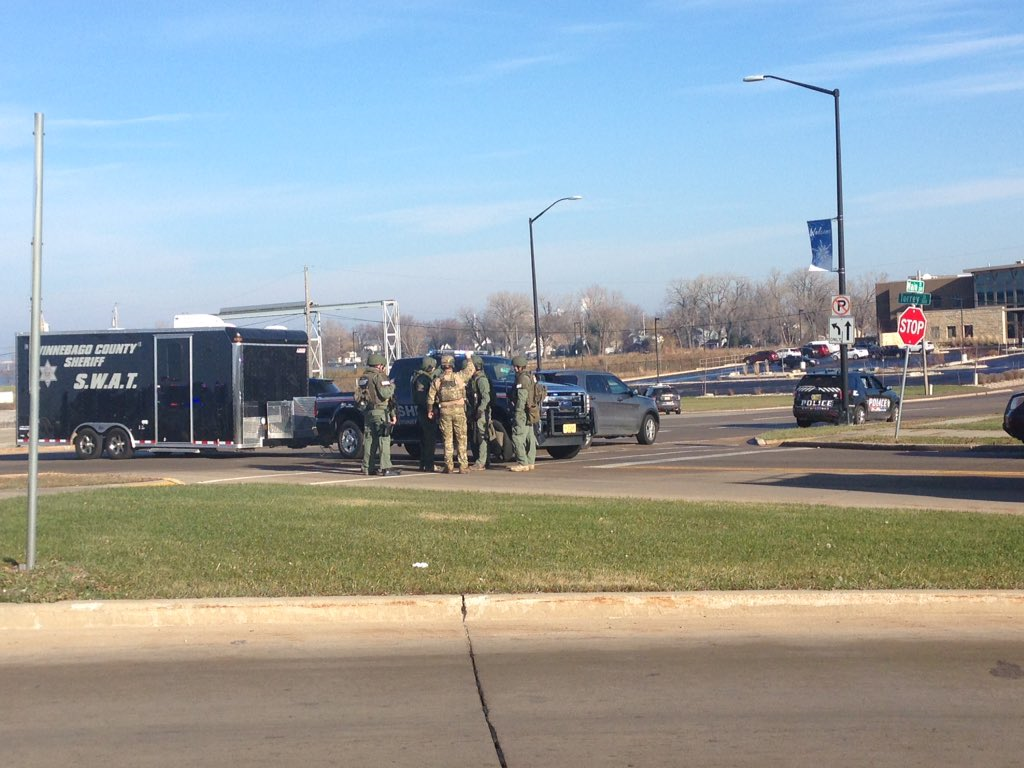 posted on Dec, 5 2015 @ 12:41 PM
link
Ugh. Again. I think this is the scanner. One guy said they didn't have enough people and I think they said they're cutting power, and then they will make a move.

All that I can find out so far is that shooter fired 30 shots and that he has barricaded himself inside motorcycle shop with hostages.

This is a few hours away from me, but still a little too close to home.


I am beginning to really wonder what is going on around this nation. I will wait for more details before passing judgement, as I think we all should. Good grief man they are going to absolutely try to destroy gun ownership.

Since it will all be blamed on ISIS without a moments thought.

Nothing to see here folks! Move along!

posted on Dec, 5 2015 @ 01:11 PM
link
Looks like the Obama administration really needs support for boots on the ground in syria . We can't let them pesky Russians destroy our little proxy war we worked so hard to achieve . Assuming this is another "ISIS" attack.... Of course .... How many more attacks will it take to get the American people to support the cause ?
Just saying ...

Could it be nnother husband and wife 'JIHADI BONNIE & CLYDE' headlines in the making?

What will they think of next, GAY Jihadis?!

I thought the same thing when that happened and it's because it was black on black gang violence. I'm wondering why this shooting in Neenah isn't on the national news yet. Hostage situation for over 2 hours with over 30 shots fired, thought it might get more attention especially coming off the last week with Planned Parenthood and San Bernadino.