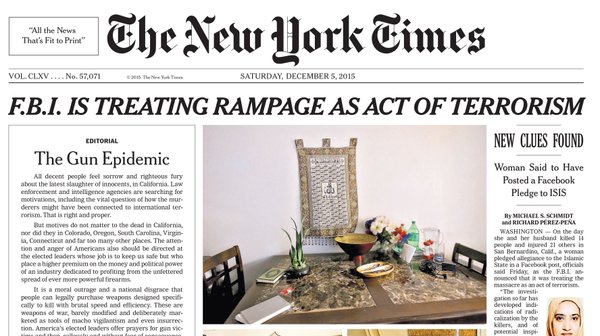 On saturday for the first time since 1920 The New York Times will publish a front page editorial on gun control.

How will stricter gun laws help at all? These terrorist all already have lots of guns and ammo just stockpiled, so how the hell will making it harder to get for everyone else help anything at all?

I want to be armed and want the people around me to be armed more than ever.. I live in Kansas and everyone in this state has a gun I have never been shot, been shot at , never even had a gun pointed at me (outside of LEOS).

I have never had to shoot anyone or even point my gun at anyone. Not once..

So where exactly is the epidemic, I just dont get it.. They already know about all of these terrorist before hand they just wait to tell us untill after they kill a bunch of people. We have to stop them ourselves.

Fortunately for us, the more they try and take the guns the more guns are sold.

I think this is one battle they will lose, you can hype the fear as much as you want, any logical individual will realize that it is upon himself/herself to protect their families and themselves.

I second your statement... ARM YOURSELF

The editorial will be short on facts and nearly void of any logic.

They clearly have some strong opinions on the subject.

They clearly have some strong opinions on the subject.[/quote

I already read it... complete garbage.

posted on Dec, 4 2015 @ 10:36 PM
link
At least it's the Times. No one cares what they think outside of the liberal echo chamber. They used to be the paper of record, now they're a joke.

Biblical prophecy about this......we will be made to submit through sorcery.

as for me and my house......we have so many in our bunch of country boys that grew up together....( everyone had five acres )....bury some in a tube with a backhoe.

No, we won't be made to submit. We will be deceived if possible.

First the article pulls out the old tired meme of so called assault weapons designed to shoot faster ignoring the fact there is no such thing. Regardless of the fact that AR style rifles shoot no faster than any other semi-auto rifle, they need to be banned because they look scary. Facts be damned.

Surprisingly, they outright admit at the end of the article the support gun confiscation.

Yeah, no one is coming for our guns...sure.

posted on Dec, 4 2015 @ 10:59 PM
link
As I said in another thread, the people calling for more gun control are not helping their position in light of the circumstances of this case. Sure, it'll sell in large, liberal cities that are already locks for their supportive Democrat allies.

The problem lies in the suburbs and the rural districts...the places that Dems have been struggling mightily to win in recent election cycles, particularly down-ballot. A gun control push is not going to go well right now. Those people are not going to want to hear about a restriction of their Constitutional rights because of a terrorist attack. I can only imagine that there are a lot of House and state level Democrats that just wish the national party would shut up right about now, because this WILL cost them governorships, state houses and possibly House seats as well. And in terms of state legislatures, especially, the Dems can't afford any more losses.

originally posted by: alienjuggalo
I have never been shot, been shot at , never even had a gun pointed at me (outside of LEOS).


originally posted by: alienjuggalo
I have never been shot, been shot at , never even had a gun pointed at me (outside of LEOS).


Maybe not But I feel safer.. And i tell you what If I am ever at the mall or something and someone starts shooting it up I for one will be shooting back..

posted on Dec, 4 2015 @ 11:26 PM
link
Really. Who cares what the NY Times has to say. They do not speak for the majority of Americans. They think American gun owners are "macho vigilantes". They don't have the slightest clue what American gun owners are. Liberals have an inability to look beyond one or two layers of an issue. But they do like to bloviate as if they know something.

Gun control is the same as speech control.

We're talking about rights here. Not some government allowance.

originally posted by: alienjuggalo
. And i tell you what If I am ever at the mall or something and someone starts shooting it up I for one will be shooting back..

I'd hate to be caught in that crossfire...

posted on Dec, 5 2015 @ 01:56 AM
link
We're too far gone anyway. The NRA rewrote the 2nd amendment too long ago (wasn't actually that long ago). It's hard to remember, but it was fairly recent that this new take on the 2nd amendment set out to rewrite the constitution (a sad day). And now we act like the constitution actually states that individuals have the right to bear arms for self-protection or hunting (it doesn't). What you've got is British common law, from over 239 years ago, an activist judge, & the NRA. Go lobbyists!

Would a gun grab work... nope. Too far gone. And too much riled-up fear among the gun-toters (over a law that got rewritten).

posted on Dec, 5 2015 @ 04:34 AM
link
Anti-gun control posts won't get you many stars here on ATS. Most members are right-wing, trump-supporting, muslim-hating, gun-toting good ole boys that think the government is coming for their guns.

And they are "denying ignorance".

I'll just deny their ignorance. After 10,000 mass shootings the government still ain't come for dem gunz. Why would they need to when they already control the minds of them gun-toting citizens? Owning those guns makes the citizen feel safe and in control why the government erodes rights away that actually mean anything (i.e. civil) and continues to squeeze the middle class out of all its spare dollars. Then the .gov talks about gun control so they get all up in arms about their guns and conveniently forget all the important issues.

Have to hand it to the US government. When it comes to mind control and manipulation we are in the presence of a master.