The Perception Deception - US Crime Rate Still Near Record Lows.

That jumped back into my mind after hearing about the latest rounds of shootings here in the US and I got to thinking... I remember hearing, almost on a yearly basis now, usually through a quick and dull monotone one-liner on the radio (NPR), how the crime rate in the US is still falling. Yet the public perception is completely oblivious to this fact, mostly due to the sensationalization of crime through the media. Who race-bait, blood-bait and fear-bait any and all crimes to the point of creating this mass delusion... 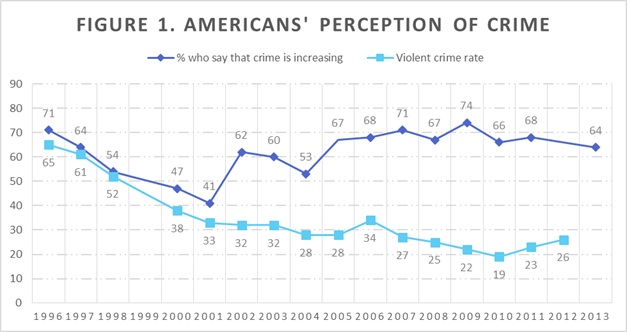 Here's a snippet from a great article I found on wanttoknow.info...


Did you know that according to official FBI and U.S. Department of Justice reports, the rates of violent crime in the U.S. are now at their lowest level in 40 years? Did you know that violent crime rates of 2010 were 1/3 the rates of 1994? Other countries are experiencing a similar decline. And deaths of law enforcement officers are at their lowest in 50 years according to this Boston Globe article. What inspiring news!!! Yet notice how little media attention this is drawing.

In my opinion, this is nothing but the result of mass connectivity and the ease of instant communication the good ole internet has brought us. We're so transfixed on fear to the point of being uncontrollably hyper-vigilant, it's borderline paranoid schizophrenia for our collective conscious.

Shootings like the ones we're experiencing now happened all the time back in 80s and 90s, but we simply didn't have the resources to cover every event outside of local media. Case in point; I wasn't even aware of the infamous North Hollywood Shootout until I saw it on one of those crime footage countdown shows, two years after it happened...

...this would be global news in todays world. The media would hump this dry until it was burnt into our subconscious and protests began demanding reform of one kind or another.

posted on Dec, 3 2015 @ 01:06 AM
link
That graph covers a relatively short period of time in human history. Scale it out for 2000 years. We are living in radically peaceful times.

True that, for sure.

I thought this might get more replies and flags, but us ATS'ers aren't know for our optimism.

Some could argue that gun control IS working.

True that, for sure.

I thought this might get more replies and flags, but us ATS'ers aren't know for our optimism.

It won't, if it's not eye-catching and/or blatant fiction, it won't get many replies.

The majority of this site would rather believe fabrication than truth. They need it, they crave it ... they need others to implant thoughts, perceptions and beliefs.

In Compton, California during the 80s, gang-wars were so bad there were literally bodies stacked in alleys. You didn't see one protest, one white person even knowing about it, any jerk-off shouting "Black Lives Matter!" If there's no agenda, you don't hear about it. Instead what you got was Bush Sr. on National Television with a bag a crack (which no one even knew about at the time) then immediately over night crack flooded streets far and wide.
edit on 3-12-2015 by Flesh699 because: (no reason given)

posted on Dec, 3 2015 @ 08:37 AM
link
To an extent what you state is true.
There is less crime committed among the populace.
On the other hand we have a sold-out government committing crimes against the Constitution and the people of the United States almost daily.
That however is never termed as crime but as "policy" or incompetence.

What makes the drop in crime even more staggering is the fact that there is twice as many people in the county today than there was 25 years ago.

Speaking of BLM Flesh699, My brother has a few good friends who are black and ones an out spoken BLMer. My bro asked them point blank the other day and very was serious, "Man, whats all this about, really?" Their response, "We're just taking you guys for a ride, we kind of laugh about it, but really man, it's our only angle."