posted on Dec, 2 2015 @ 02:43 AM
link
I'm a little new to art, I've been goofing around with all kinds of digital art software lately. I like the work flow in Paintshop Pro the most, and just discovered Krita and it's cool brushes. I like to do weekly sketches on both android and ipad, tis where I practice my art the most.

I have been thinking about spending more time in art, mostly in cartooning and maybe comics. I'm wondering what advice any of you have in that field of art. What direction to take in creating and publishing comic strips etc... I like to try some short comic strips... or maybe a silly comic book.

I'm a fan of Mars Attacks! The movie, the comics are awesome!!!!
I love a Martian with a sense of humor.

The image below was inspired by Mouse On Mars thread lol. I spent about an hour creating it and then posted it quickly without caring how sloppy it looked. I used a Tom and Jerry image for reference.

I have since updated the image and fixed his head, I noticed the brains not centered lol.... critiques are welcomed. 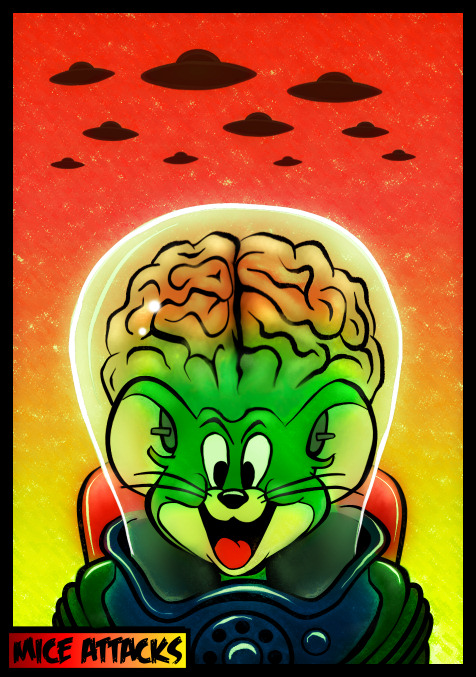 posted on Dec, 2 2015 @ 06:53 AM
link
Do you have any examples of a working concept for a comic strip? Are you only working with digital media, or do you also utilize more traditional means like pencil and ink? I may be able to offer some advice to you first I'd like to see your thought process. The reason is, some people work in different ways where as some do a linear layout while others take more non linear approaches. Are you the writer and illustrator? This makes alot of differences as well. I am doing a comic book and I am the writer, illustrator, inker all in one, to make it the way I envision has been a learning experience regarding being able to organize my thoughts and use imagery to accentuate the storytelling.

posted on Dec, 2 2015 @ 04:48 PM
link
I like your image and appreciate the hard work you obviously put into it. I have a suggestion: change the title to either "Mouse Attacks" or "Mice Attack"... in my opinion, the current title feels clumsy. Other than that- GREAT!!!

Do you have any examples of a working concept for a comic strip?

I don't have a comic strip yet..... I do have an art blog here. mrnobodyart.blogspot.com...

I've been painting and drawing for about 4 years with traditional and digital media, and for the past few months learning to digital ink illustrations etc.

Mostly self taught, and in a local painting class that's stealing my money for canvas frames lol....

I do have a illustration concept.... called : Red Chaku

It would be a grungy black and red theme comic book with a Irish female nunchaku assassin lol. I'm not sure of the best way to finish and publish it. 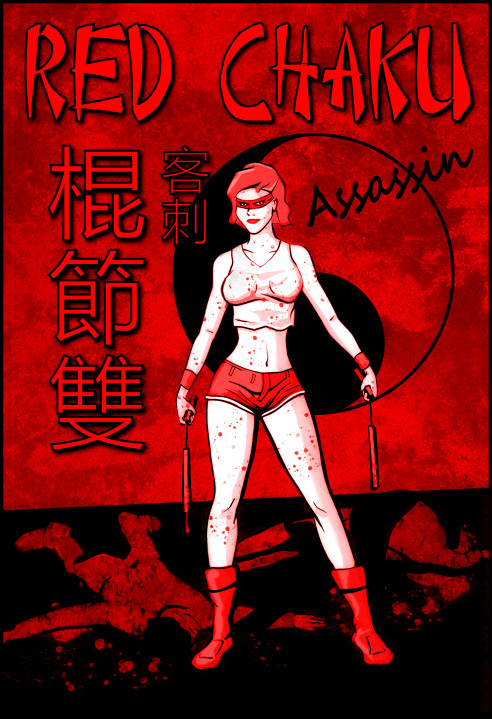 The daughter of a Irish Republican Army member trained in several styles of martial arts, who later became Mayor of New York City....

Are you only working with digital media, or do you also utilize more traditional means like pencil and ink?

I would be using digital media.... traditional Inking is something I might try one day, it seems more organic looking than digital.

I may be able to offer some advice to you first I'd like to see your thought process. The reason is, some people work in different ways where as some do a linear layout while others take more non linear approaches.
Are you the writer and illustrator? This makes alot of differences as well. I am doing a comic book and I am the writer, illustrator, inker all in one, to make it the way I envision has been a learning experience regarding being able to organize my thoughts and use imagery to accentuate the storytelling.

Hey awesome, I could use lots of advice.... You gotta link me to your work. I would imagine it's a huge task to do it yourself... I have been thinking about that and how you guys keep it fresh... the time it takes to create, self-discipline and staying motivated.

Yeah I'm not much of a writer, more on the illustrator side.
My spelling and grammar skills are so bad that spellchecks usually freeze up. :O

I do have a rough sketch written up for a comic book, but it's more of a storyboard on paper with different box scenes and endings... and it's only 2 pages long. My dominant right brain can't get past 2 pages lol.... I dunno, maybe I'll start off with small comic strips first then on to comic books.

posted on Dec, 3 2015 @ 06:42 AM
link
a reply to: imitator
I'm going to take some pictures just for you, pages beginning to end with how I block it out my ideas for organizing my thoughts, flow charts etc. As long as you swear to secrecy jk about that. In the mean time you can see my work here on ats, go to the last page to see how everything progresses.

posted on Dec, 4 2015 @ 12:47 AM
link
I have a ton of pix for a page and its layout how I do it from blank paper to completion. Do u want me to post them here or u2u? Lol it involves a really badass train for my book.

Bro your awesome, I really appreciate it!
I'm very interested in your process, you can post them here or u2u... however you feel most comfortable in posting your images. I'm all for seeing badass art work...

posted on Dec, 4 2015 @ 08:03 AM
link
a reply to: imitator
Here dude, there are so many images it would take me an eternity to post them all so here's a link that will take you to my Photobucket account to the ones I took especially for you. Lol page 4 at the station.
LINK

posted on Dec, 4 2015 @ 04:10 PM
link
Thanks Bro for taking the time to show me your work process, the art looks awesome! Do you write down the script and scenes, think out the page layout before drawing or a combination of stuff? I start off my sketches with stick figures, sometimes digitally blob out colors and shapes.... It looks like you sketch out what you see in your head, which is pretty cool...

You got a very original style, I would definitely buy if I saw it on a bookshelf. That train flowing through both perspectives is very cool, the layout is awesome too. Very creative, good stuff!!!

And here is the page before it leading up to that


U2U me bro, ill get it set up with everything on how I organize, I'm not going to publicly post everything for something I'm currently doing but I will set you up with my format and logic. Logic being how I choose one thing over another after like a mecha **ck ton of drawings etc
edit on 4-12-2015 by Brotherman because: (no reason given)

Remember the flow chart with the wolverines (in the zoo)
Full Image
Hopefully that helps u brother. It is my way but there are many other ways of organization.

You helped a lot bro, thanks for sharing your chart and pages that follow it...

I will give those charts a try, I also sent another U2U!

posted on Dec, 7 2015 @ 06:39 AM
link
Make sure when you start out to u2u me, I'm really interested in seeing what you come up with bro! And good luck.
Oh and another thing try to not judge your own work, your the only one looking at it 8-10-12 hours a day make sure you are able to find people willing to look it over for you and give you feedback. I have this problem alot where I want to evaluate my own stuff and in reality how I see something and how 4 or 5 others see it can and often times does vary greatly different. I'll talk with soon bro!