posted on Dec, 1 2015 @ 06:40 PM
link
Nearly seven hundred years ago, on an island in Lake Texcoco, in what is now Mexico City, the great Aztec altepetl (roughly city-state) Tenochtitlan was founded. At its height, it was the largest city in the Pre-Columbian Americas.

One of the most important temples in Tenochititlan was the huei teocalli, what is known today the Spanish name Templo Mayor ("Great Temple"). The complex was essentially two conjoined step pyramids upon which sat twin shrines where sacred fires were continuously burned, one shrine was dedicated to Huitzilopochtli, the god of war and the other to Tlaloc, the god of rain. The temple was built in six phases and in its final form, it stood 100 m x 80 m (328 ft by 262 ft) at its base and was nearly 200 ft (60 m) high. The image below shows a scale model recreation (source Wikipedia): 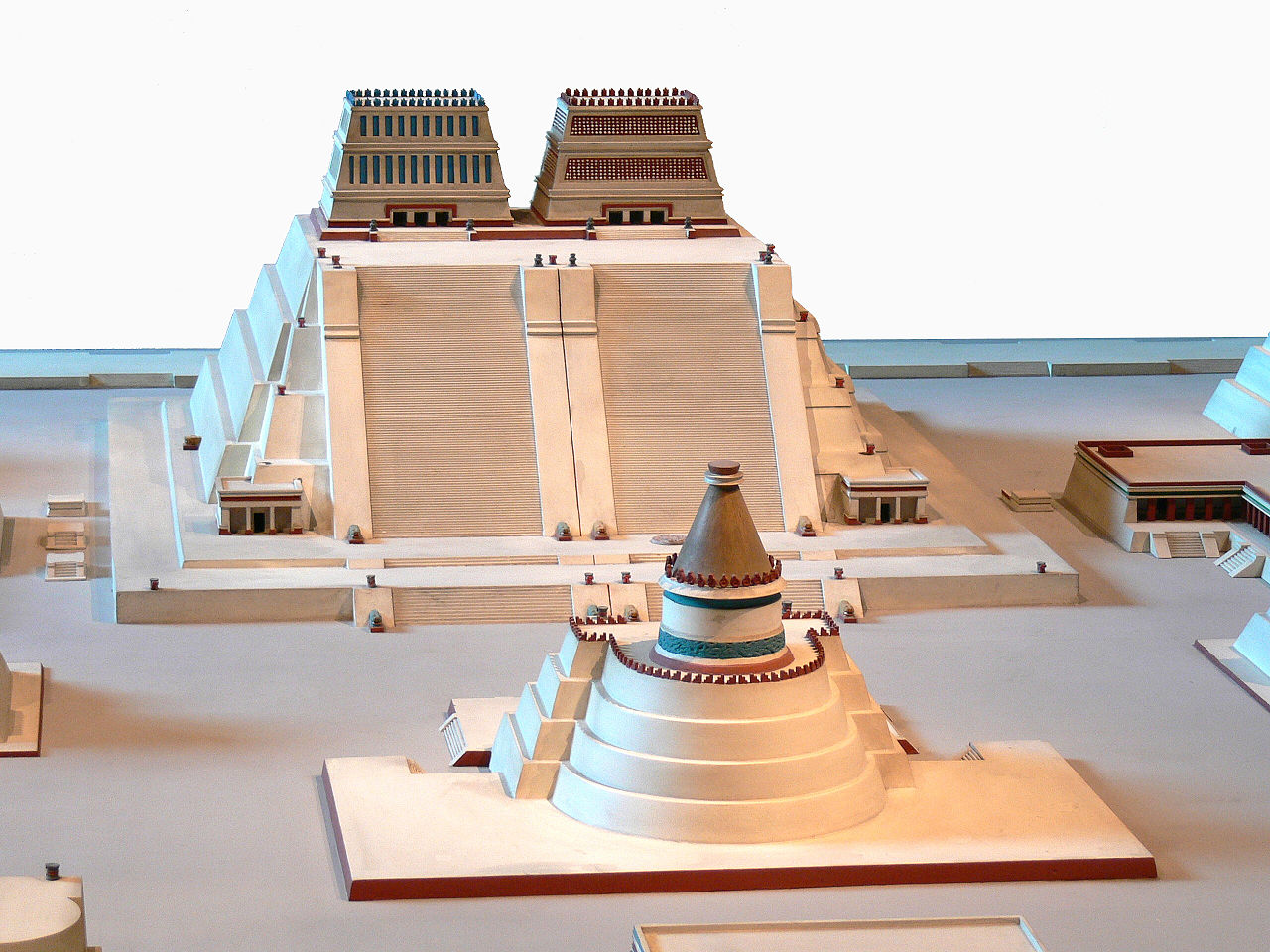 The temple was destroyed by the Spanish under Cortes in 1521 upon the defeat of the Mexican (Aztec) Empire and its ruins covered over during the construction of a the new colonial city. There it lay for four decades until it was located again in the early decades of the 20th century. Excavation of the site began in earnest in 1978 and it's been listed a UNESCO World Heritage Site since 1987. Here's a picture taken in 1999, showing parts of external staircases from separate phases in construction (one was built over the other) also take from Wikipedia: 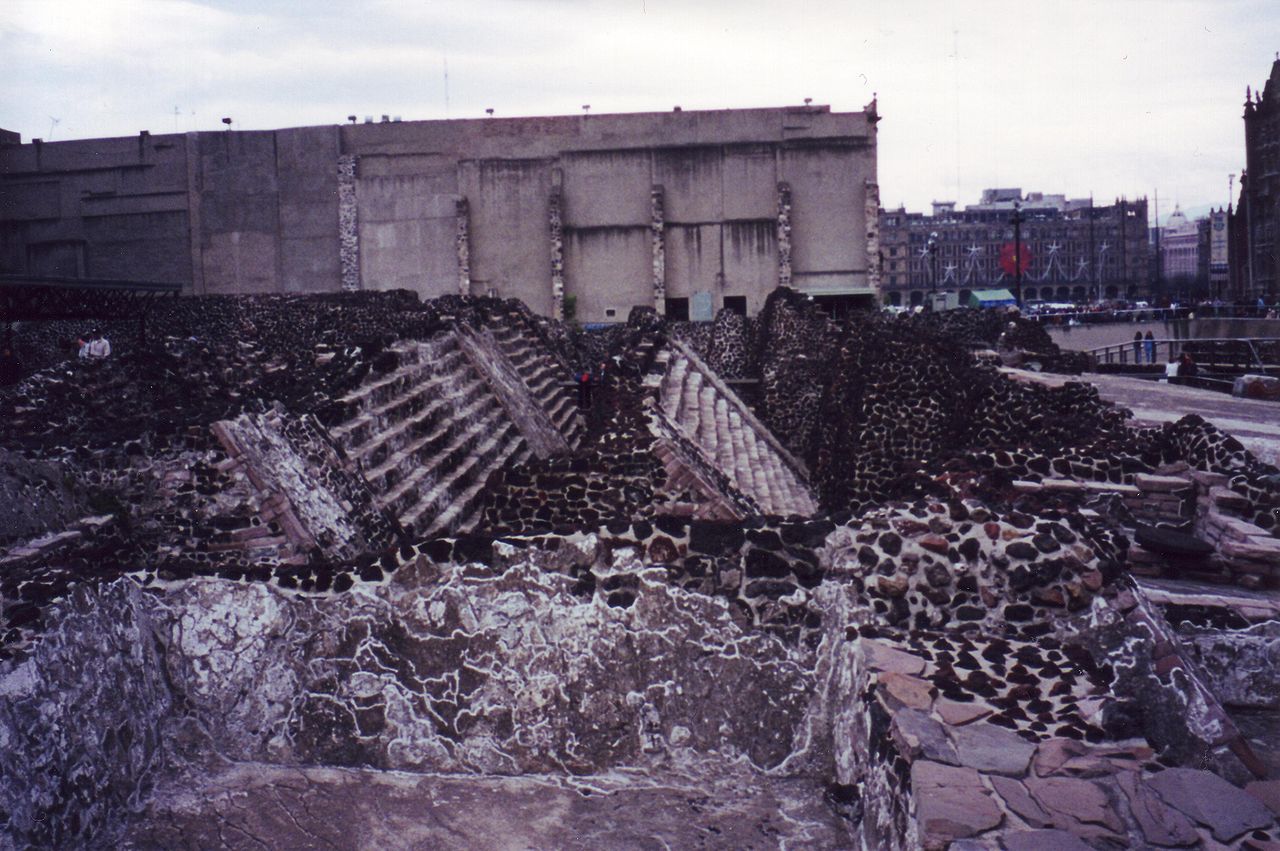 It is believed that in the time of Tenochtitlan, Aztec rulers were cremated but to date no cremains of their rulers have been found... but this might be about to change!

A Mexican archaeologist said his team has found a tunnel-like passageway that apparently leads to two sealed chambers, the latest chapter in the search for the as-yet undiscovered tomb of an Aztec ruler.


The National Institute of Anthropology and History said Monday that a team led by archaeologist Leonardo Lopez Lujan had discovered an 8.4-meter (27-foot) long tunnel leading into the center of a circular platform where dead rulers were believed to be cremated.

The mouth of the tunnel was sealed by a 3-ton slab of rock. When experts lifted it in 2013, they found a hollow space marked by offerings by both rich and grisly.

Gold ornaments and the bones of eagles and infants were found in an offering box. Two skulls of children between five and seven years old were found with the first three vertebrae, suggesting they may have been decapitated. The kind of stone knives used in human sacrifices were also found, as well as a hand and bones from two feet.

But one researcher detected signs that a passageway appeared to lead deeper into the ceremonial platform, known as the Cuauhxicalco (kwow-she-KAL-koh), where written accounts from after the 1521 Spanish conquest indicated that rulers' remains were burned.

Excavations of the sealed chambers are slated to start next year and I can hardly wait! Looks like 2016 is shaping up to be quite a year for pyramids with secret chambers.

Looks like 2016 is shaping up to be quite a year for pyramids with secret chambers.


I think ALL such excavations should be done in full public view, unlike much of what takes place in Egypt!
Get the tv camera's in there and let us ALL see what they find When they find it!

To this day I am still fascinated by this ancient structures, the designs are just something out of this world...

I wouldn't be surprised if they make an extraordinary discovery there.

originally posted by: InnerPeace2012
a reply to: theantediluvian

I wouldn't be surprised if they make an extraordinary discovery there.

posted on Dec, 1 2015 @ 07:18 PM
link
When you have a population of several hundred thousand and nothing else to do except war and sacrifice, construction work is good way to keep everyone fit and practice coordination.

posted on Dec, 1 2015 @ 07:19 PM
link
Tabernacle, and the Kings and Queens tombs, Exodus.. Seems a Levite is lurking in the Myst!
Prophecy becomes self fullfilling!

Looks like 2016 is shaping up to be quite a year for pyramids with secret chambers.


I think ALL such excavations should be done in full public view, unlike much of what takes place in Egypt!
Get the tv camera's in there and let us ALL see what they find When they find it!


Have you ever been on a dig?

Watching a dig is rather like watching paint dry unless you happen to be the one digging. There's very few dramatic finds and a whole lot of careful and tedious removal of layers (very slowly) and long pauses to document, measure, photograph, and preserve finds. People don't even watch the live feeds from the space station on NASA channel. The interest in digs would last all of 5 days before people went hunting for news on the Kardashians.

In any case, digs and archaeological work are often accessible and being done in full view of the public. We saw the Polish team working in the back of Hatshepsut's temple while we were in Egypt last month and watched a student sitting on a scaffold transcribing hieroglyphs into a small notebook. She clicked on a flashlight, studied, clicked the light off, wrote, clicked the light on, checked her transcript, clicked the light off, made a note, and repeated the process... for hours.

You, too, can be there. Take some archaeology courses at a university and look for their summer research camps. You can go all over the world if you have the money to pay for it, have the ability to get the passport and vaccinations, and have the stamina to do the work.
edit on 1-12-2015 by Byrd because: (no reason given)

In the uk we have a wonderful series on tv called Time Team. They DO film the slow layer by layer digging, though its not usually live, and we only get to see the edited highlights most of the time. Its on for an hour and its very popular!
It can be done!

Gold ornaments and the bones of eagles and infants were found in an offering box. Two skulls of children between five and seven years old were found with the first three vertebrae, suggesting they may have been decapitated. The kind of stone knives used in human sacrifices were also found, as well as a hand and bones from two feet.


Wait, does this mean I get to compare the Aztecs to ISIS AND Saudi Arabia?

Sounds like a bunch of baby killers to me, lol.

There's nothing better than finding a sealed doorway that could lead to anything imaginable. Just once I wish they'd find some off-world technology or the preserved body of an extraterrestrial, shriveled up in a funny looking suit. I know, wishful thinking.

Sorry, I'm half asleep or I'd dig and post something relevant. I'm not sure if I'm just paying attention more, but these past few years have yielded some amazing discoveries. You gotta love the guys response below. I mean, who wouldn't be excited! Thanks again for posting.

"Obviously, this includes re-excavating the passageway and finding out what lies behind the two sealed doorways," Lopez Lujan wrote. "The hypothesis is that there will be two small chambers with urns holding the ashes of Mexica rulers, but we could be wrong."

I am fascinated by archaeology, but unearthing things that have been buried comes with consequences. It's just logic. Remember when they dug up those plague victims a few years ago in Britain? And found out it can survive that long? Yeah. It's no bueno.
edit on 2-12-2015 by rukia because: (no reason given)