STT News - East Blight, NJ - In the small New Jersey neighborhood of East Blight, Luigi Santorini has been making pizza the same way his father and grandfather taught him nearly two decades ago. But for those who accidentally stumble upon the old eatery, the surprise is what’s inside at Santorini’s Pizza & Sandwich Shop.

Luigi had this to say about his pizza making traditions, “Papa was a hands-on kind of guy. He believed in making sure that his pizza was done his way.” 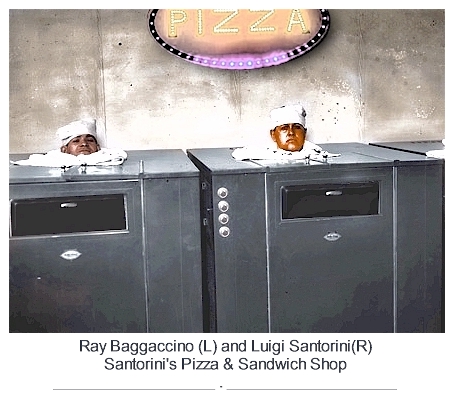 Helping out with the business is cousin Ray Baggaccino, who tends to menu items like toasted gyros and strombolis. He too had a few words to share as we were sampling some of the cuisine. “Some people come in here and say, ‘Hey Ray! What da *expletive* you doing in the *expletive* oven?’ And I say, what da *expletive* does it look like I’m doing you *expletive* schmuck!”

The shop is located in the lower section of East Blight and is about the only business that remains in this once bustling borough. “We don’t get too many *expletive* newcomers here.” Luigi explained. “You see a new face, it’s because they are trying to find someplace *expletive* safe where they don’t have to dodge the *expletive* gunfire outside.”

Just before wrapping up our visit, Officer Sean Gillicutty of the local PD stopped in to order some lunch, and asked how long it would take because there was a gang war scheduled for that afternoon a few blocks away. Ray looked at the wall clock and then replied, “What da *expletive* do you mean 'how long'? Do I work for you, you *expletive* mick?”

Life goes on here just as it has for countless years. And the pizza is pretty good, too!

As a New Jersey resident, I approve.

Only thing I would change is Italians usually use Italian curses instead of schmuck.

originally posted by: AugustusMasonicus
a reply to: redoubt

As a New Jersey resident, I approve.
Only thing I would change is Italians usually use Italian curses instead of schmuck.


My ex-son-in-law is from NJ as well. He helped me put this little thing together about 5 years ago... before he ran off with a college chic from Florida...and my little girl got everything.

I'm also in NJ and half Italian. If the place is real, I want the address. I can go for a pie or 2 and leave a message: