posted on Dec, 1 2015 @ 02:58 AM
link
Now this is quite a unsettling mystery. In recent weeks, at least eight wooden ships have been found by the Japanese Coast Guard containing twenty decaying corpses. 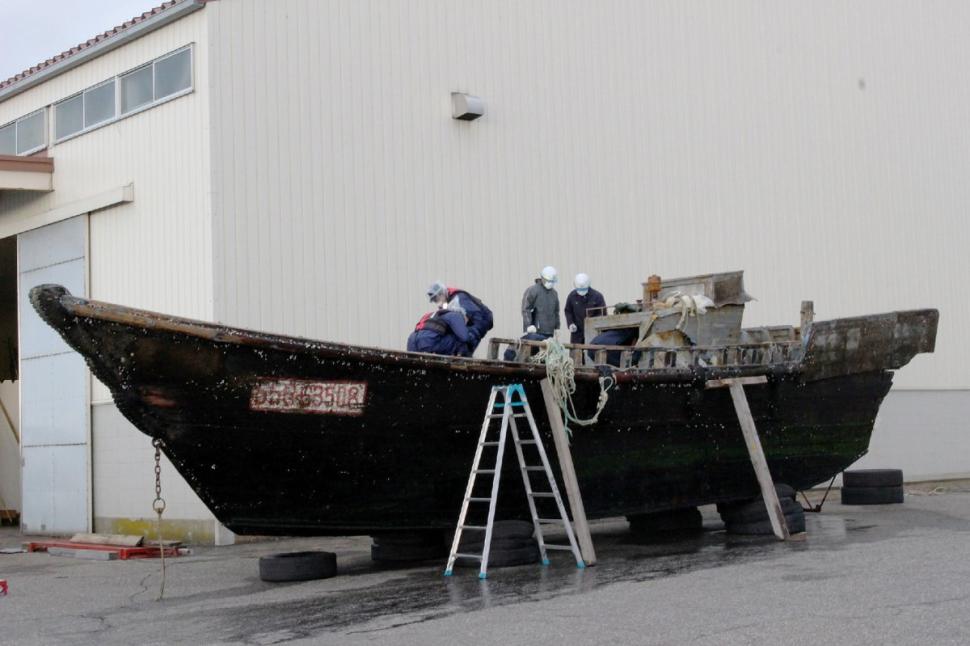 The bodies were decomposed and “partially skeletonized,” the coast guard said. Apparently two bodies were found headless and one of the boats even carried the skulls of six sailors.

It is unclear where these boats — which reportedly started to show up in October — came from, but the Japanese coast guard believes they hail from North Korea.

One of three boats found in Wajima on Nov. 20 reportedly carried 10 decomposing bodies and bore on the boat’s hull Korean lettering that stated “Korean People’s Army,” the coast guard said.

Japanese news outlet NHK reports that a piece of cloth appearing to be part of the North Korean flag was found on one of the mysterious boats.

Experts told CNN the boats are likely from North Korea.

Upon seeing pictures of the boats, he said its lettering — appearing to either be Korean or Hangul — and the “primitive” nature of the boats were enough to make a good assumption that the boats are probably from North Korea.

An expert told NHK that the boats are similar to ones used by North Korean defectors.

Defectors that were killed and set to drift? Fishermen who were lost at sea and possibly resorted to murder, potentially cannibalism? Something else?

Telegraph UK is reporting 25 bodies on 11 vessels and also the following:

A spokesman for the Coast Guard confirmed that words in "hangul" were identified on some of the boats - one bore the characters for Korean People's Army No. 325 in red - and most were carrying fishing equipment.

One of the most recent discoveries was off the port of Wajima, on Japan's northern coast. The 40-foot wooden boat contained 10 decomposing bodies, nets and fishing gear.

The port is about 530 miles from the east coast of the Korean peninsula.

edit on 2015-12-1 by theantediluvian because: title updated to reflect additional details

posted on Dec, 1 2015 @ 03:06 AM
link
I have read over the years that other instances of these kinds of mysteries have been attributed to sea monsters. Creatures such that might be considered water dinosaurs. Either that or the Church of Dagon are messing about with their Ancient Ones rituals again.

posted on Dec, 1 2015 @ 03:16 AM
link
Much more information than the first article that showed up a few days ago, so thanks for posting about this intriguing mystery.

If they really are from North K. we will probably never find out what really happened. I'm leaning away from sea monsters and more toward a completely obliterated and desperate society/legal system though.

There seem to be several factors which make time of death, and various other sundry forensic information, more difficult to recover from finds such as those which have popped up around the shores of Japan of late. First, decomposition, as a chemical process, is normally aided by the activity of insects. When a body is out at sea, and not amidst the normal plethora of flying bugs, crawling insects and other carrion eating, egg laying parasites of the dead, it means that the speed of the break down of the body will be different, adding an unhelpful variable into the investigation.

Also, one has to consider the difference in humidity when over the open ocean, when compared to on land, and indeed, which specific land the boats might have come from. That being said, if the boats are from North Korea, then it is reasonable to assume that the boats left the place with live occupants, and that something befell them while they were at sea. The reason I would say this, is as follows. The boats themselves, if the image is anything to go by, do not look as if they were built for speed, and so it is probable that if an assaulting force were to want to raid them, they would have been easily overtaken, flanked, and bought to a stop.

Also, it is unlikely that pirates would have bothered with the occupants of such a clearly pathetic vessel, which by the looks of things had nothing of worth on board, certainly not tradable worth. And yet, there are bodies without heads, and heads without bodies on board these boats. I suppose it is POSSIBLE that some vast sea birds made off with the missing heads, after smaller carrion birds of the sea nibbled away the neck flesh, but I consider that very unlikely indeed, and that does not explain the missing bodies, for which a skull is present.

Far more likely is that whoever boarded those vessels, butchered the occupants of said vessels, and set their engines to power them out into the open sea, to wash up wherever, whilst sending a certain message to those within, and those without the nation from which those boats may have come. But that brings us to another question. How long were those boats on the open water before the assault which lead to the decapitation of some of the bodies? How long were the boats adrift with nothing but corpses on board? There are too many questions, and too few answers.

With enough tidal data, and a better grasp of the variables presented by the difference between decomposition on land, and decomposition over a body of salt water, not to mention a detailed study of the findings of the autopsies which will no doubt ensue, one might be capable of at least figuring out the point of origin for the craft, the rough time of death for the occupants of those vessels, and thereby come up with some suggestive or probative information which might lead to at least tentative identification of the killer or killers involved.

But alas, these news reports lack significant details of that nature.

I think cannibalism is the most likely explanation.

Or ISIS got them.

posted on Dec, 1 2015 @ 07:57 AM
link
a reply to: TrueBrit
If from North Korea, we are not likely to hear from those that are missing family or loved ones that set sail on a fishing trip and did not return.

If it is a message, it is either being sent to a select few and is well crypted, or we are missing pieces of the puzzle.

a 40 foot fishing vessel does not need a crew of 10
so i would say they were not out fishing when they were (likely) killed
(it doesnt say where the bodies were on the ship but i highly doubt there were 6 skulls just rolling around up on the deck for who knows how long so they would have had to have been intentionally placed below deck.... why not just throw them overboard if they were killed at sea?)
the method of execution (assuming that is the case) varies
so i would think that it was some kind of punishment and the reasons for the punishment varied

posted on Dec, 1 2015 @ 09:25 AM
link
I think they were defectors that were caught by NK patrols, murdered and or beheaded and set a drift

originally posted by: ManBehindTheMask
I think they were defectors that were caught by NK patrols, murdered and or beheaded and set a drift

All else is just avoiding the reality of the situation.


The obvious answer is Cthulhu.

All else is just avoiding the reality of the situation.

Smuggling situation gone wrong seems to fit as well. Smuggling what? Who knows.

I'm favoring a hypothesis that they were North Korean defectors who were killed and left floating as an example and the currents carried them down into Japanese waters. If this is what happened, there might have actually been far more people killed than those found in boats.

Hypothesis #2 is that they were all out fishing when a storm or the like took them out into the open sea where things got really ugly before they all ultimately perished. If this was the case, I can think of a number of reasons why one boat might be carrying 10 of the dead while others had one or two people (or six skulls).

I'm surprised that considering the first boat was found in October, there wasn't more details about the forensic analysis of the remains and the boats such as evidence pointing to the manners of death.

posted on Dec, 1 2015 @ 11:20 AM
link
This certainly ranks high in the creep-o-meter. I'm going along with the majority on this one, defectors caught by NK coast guard and executed at sea in their own boats and left adrift.

posted on Dec, 1 2015 @ 11:33 AM
link
Really creepy, Im thinking defectors, although if you wanted to send the message to North Koreans..would you send the boats out? I mean how much news do N Korean's get outside N Korea? I suppose some news trickles in via the South. I don't for a second believe they died of starvation or by accident.

posted on Dec, 1 2015 @ 01:14 PM
link
I hope they are very careful when examining those bodies - wouldn't exclude some kind of plague/bio-weapon background. Either by the North Koreans or somebody wanting to make it look like it was them. But I agree that the most likely scenario is that of discouraging further potential refugees.