Cactass, California - STT News - Professor Naggin P. Hawgswaller of Cactass Community College in Cactass, California, today announced a major discovery when it comes to male behavior; what one drives is what one's life spins upon.

During a smoke-out gathering for the graduating class of 2016, he warned his male attendees not to pay too much attention to their wants in vehicles because it can, and does define them in ways they don't really want to be known.
"The male is driven by hormones, far more than his female counterpart. Without thinking, you can define yourself for the world to see, even when you're not on your iPhone, your iPad or your Xbox."

Hawgswaller went on to detail how some guys have deeply rooted but unrealized desires to drive large pick-up trucks with over-sized wheels or, in other cases, cars with large MORAS's (Moron Operated Radio Assault Systems). When the study was completed in 2012, it showed that most of these types had smaller-than-average penises. 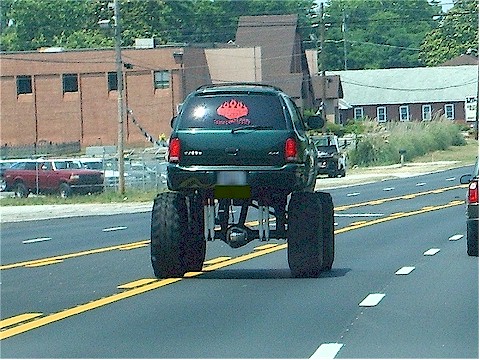 "Large pick-up trucks/SUVs that sit high off the road and/or those vehicles that can thump music for miles, are basically subconscious efforts to extend undersized phallic members. Many people, when looking in their rear-view mirror and seeing these morbidly obese trucks behind them on their bumper or having their head thumping from the sound being ruthlessly emitted from the car next to them in traffic jam or at a red light, need to understand those poor souls who are driving them."

The professor closed by saying that identifying these things can be of great benefit to society, especially considering the sum of road rage incidents today. He also suggested that a federal agency be created to locate and identify these types and offer them phallic enlargement surgery or, perhaps, removal of the member altogether.

"removal of the member altogether. "

I just spat my water all over the screen... LOL

posted on Nov, 30 2015 @ 03:31 PM
link
Does this mean the ladies should keep their eyes open for the guy driving a Smart Car? It would be interesting to see if the correlations work in the opposite direction.