Obama accepted $1.3 million in gifts last year from a country that beheads more people than ISIS


"Released a day before Thanksgiving, the U.S. Department of State disclosed its annual list of gifts from foreign governments to federal employees. Although the State Department publicly condemned Saudi Arabia for numerous human rights violations, the Saudi king gave President Obama and his family roughly $1.35 million in gifts last year.


So the article states the following:

"The Saudi government also gave the president two gold wristwatches valued at $85,240. Leading the international community in attempting to whore out our commander-in-chief, the Saudi king also presented Obama with a gold-plated brass replica of the Makkah Clock Tower on marble base estimated at $57,000."

Instead of giving alms to the poor, Pope Francis presented Obama with a bronze medal valued at $1,015. His Eminence Cardinal Pietro Parolin, Secretary of State of the Holy See, gave the president a folio of lithographs worth $1,707.


The article then continues with these details:

Although the State Department listed several gifts to CIA Director John Brennan and multiple anonymous agency employees, the donors’ names have been redacted because “such information could adversely affect United States intelligence sources or methods.” Besides receiving a $10,000 Omega men’s watch, Brennan was also given a $7,500 decorative rug. While world leaders openly gave the president books, a CIA employee received an unidentified series of children’s books valued at $832.13. For some reason, the kid’s books were “retained for official use.”

Fortunately, the First Family cannot keep any of these gifts without paying market value for them when Obama leaves office. According to U.S. law, the president must pay for the gifts/bribes or turn them over to the National Archives or other organizations for storage or display. According to the State Department, non-acceptance of the gifts “would cause embarrassment to the donor and U.S. Government.”﻿﻿

Well this is all very interesting..Isn't this type of thing considered bribery?
Wow, I'm sort of surprised to have access to this type of information, and I'm even actually feeling a bit awe-struck about it, although I generally see nothing wrong with giving or receiving "gifts.."
edit on 30-11-2015 by tony9802 because: (no reason given)
edit on 11.30.2015 by Kandinsky because: No shouting ; no CAPS LOCK

posted on Nov, 30 2015 @ 11:50 AM
link
Been going on for a while, King Abdullah has given lavish gifts to the US president and Sec. of State for the past few administrations. The USA and Saudi Arabia are joined at the hip when it comes to MidEast destabilization.

posted on Nov, 30 2015 @ 11:52 AM
link
I will be upholding President Obama on this one (GASP, I know ,right ?) . All Presidents accept gifts from countries all over the world . Even after they are out of office. One of the extras of office.

originally posted by: Blackmarketeer
a reply to: Gothmog


Yep. Thats where they wind up.Thus the reason for stating they all do from all over the world. National archives.Unless of course they are out of office.Even then there are strict regulations imposed...I did say as it would come as a shock to members that have read previous posts by me.But this was really a non-event. 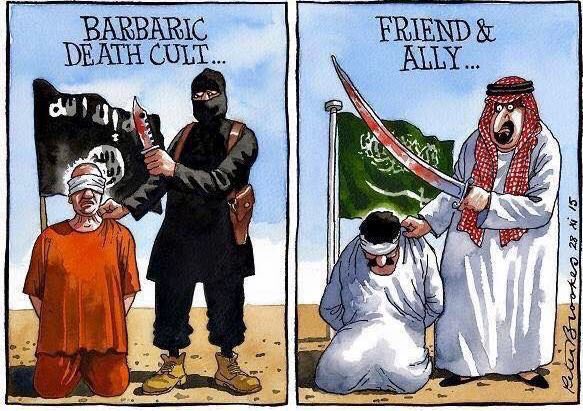 originally posted by: kloejen
a reply to: tony9802

Is the Saudi Govt. trying to commit genocide on the rest of the world like ISIS is?

posted on Nov, 30 2015 @ 01:57 PM
link
I just binged 'The Tudors' this past week..wow..I really don't think anything has ever changed. It's really not gift giving that bother me..if the world was all peachy and stuff..it's the fact that I really do believe that the money used for the 'gifts' could have been better spent...

How is barry treating Saudi any different then those before him??

That cartoon is true for pretty much any president.