Sometimes I really don't like people. The constitution isn't what you think it is.

posted on Nov, 30 2015 @ 10:32 AM
link
Hello ATS members, it's that time again - The recent planned parenthood attacks have been sending in the left wing and right wing nuts in droves, and so many people bringing up different things about the 2nd amendment, or the bill of rights on how abortion is sanctioned by our forefathers, I just wanted to make a thread about my opinions on the constitution....

First, I have my reasons to be pro-gay, and pro-choice, pro-gun - These are my stances. This is not an argument about people agreeing with me, or disagreeing, it's about sources, it's about what people choose to back their stances up.

First, the constitution is not some silly piece of paper written by mad-men. No, the 2nd amendment rights are not going anywhere, and on this note, there is statistics, facts, beyond a shadow of a doubt that gun crime can be higher even in areas with higher gun control. Stop arguing this! It's not an opinion, no opinions are going to take away our constitutional rights! Read a history book FFS! The facts, the law, the statistics, the founding of this nation backs up our second amendment rights - This is NOT an opinion of mine, and it shouldn't be an opinion of others to take these rights away.

( For the record, I DO support our free speech rights, and believe everyone is entitled to their own opinions, "opinion" as defined here has more to do with the desire to pass legislation to deny 2nd amendment rights based on said opinions, people can talk and debate all they want )

Second, it doesn't go further than it goes! No, it does not say "Two women and two men may marry each other" People would always bring up the constitution when arguing gay rights, nope! Not in there, marriage isn't! The logical thing would have been to remove everything about marriage being tied to the government ( in my opinion ) but fact? It is not tied to the constitution.

Third, it does not have any stance on abortion! I'm pro-choice because I believe a woman has a right to seek medical care for various reasons, be it mental health, physical health, etc, and I realize abortion is a needed operation at times - And I do believe in the right to privacy, therefore I am pro-choice. On the other hand, there is nothing in there guaranteeing said rights! We would have to go back and ask the forefathers themselves if they believe a fetus is a person, or a thing. Whether a fetus has the rights of the people, or whether the mother bears all rights concerning her body and what's in it. I believe biologists should be over this one - What time does life truly start? ( Brain/heart function, etc... )

It doesn't say you can't be religious! Saying a prayer at a football game is not something our constitution "separates" us from. It ensures that we do not have state funded religion, or a religion-ran state, but how far people believe this separation goes... Is just not in there. I can pray where I want, when I want - So long as I am not in a position of authority in a government position. The people can have any opinion they want, and do anything legal they want! It seems the left/liberals wants to demonize the smallest acts and call them illegal and have people jailed or fined or this or that.

Which does not excuse the right/conservative side! Your religious views SHOULD NOT be respected by the government, when it comes to things like government funding! Separation of church and state DOES MEAN that when the government is involved, your religious views can take a hike. There's the law, and the constitution backing me up here, and it drives me crazy to see what christians will excuse themselves for. believing that it's "freedom of religion" - Nope! It's not freedom of religion. Not when the governments money and resources are involved.

Anyways I could keep going, I just had to vent a moment - The constitution does NOT back up each and every individual view, and I don't think it should. I think as a people we should come to define some things ourselves, using the constitution/bill of rights as a template for our decisions, but certainly not something to use to support any view we ever have.

Hope you all had a good weekend.

posted on Nov, 30 2015 @ 10:41 AM
link
The best rant ever. Mods , there should be an award for this. What I read in this rant is PEOPLE , please leave other people ALONE. I have too much on my hands managing my own life to give a rat's --- what you think about me or what I think on any subject.Evidently some people have nothing better to do than use the Constitution to force me to think the way they do. I dont and will never....
OP , I absolutely agree. 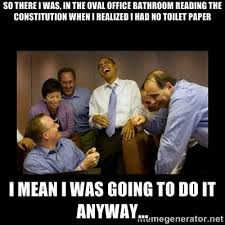 They were smoking a big fat doobie when they wrote it...seems they forgot to include a few things.

Now that is a beautiful, Libertarian rant if I have ever seen one.

Pretty much. No one needs to have the spotlight, no one needs to attack others. Hard right wing conservative Christians can be happy in their own home and so can far left liberal progressives. To desire legislation that interferes with either lifestyle directly is not the best we can do, we can ensure everyone their own rights in their own homes. Teach your kids what you want, do what you want, but don't tell me I have to do it, and I won't tell you that you can't.

I think we are on the same page.

The Constitution guarantees the right to bear arms to the people. Federal, state, or local governments have no legal authority to infringe on that right.

The Constitution clearly defines the authority of federal and state governments. It further states that authority not assigned to the federal government is reserved to the states and the people. I don't believe governments have the legal authority to restrict medical decisions or marriages. Those definitely belong to the people.

Further more, the Equal Protection clause of the 10th Amendment would imply that what is legal for some people should be legal for all. Even if the argument could be made that states have the authority to regulate abortion or marriage, they could not assign restrictions arbitrarily. They could not say that these people should be allowed to marry, and those shouldn't. Nor could they say this person is allowed to have an abortion, but that person isn't.

Unfortunately, we are in the thick of an election cycle. Both Republicans and Democrats want to place more restrictions on our rights. So you're not going to see a lot people championing the rights of all. You've got about another year of "You should vote for us because the other guys are worse."

Here, here! If a Constitution doesn't enable individuals to do their own things their own way with regardless of the opinions of others (even if said opinion is shared by a vast majority), then it isn't worth a damn, and it sure as heck isn't the Constitution of the USA.

Agreed, the Constitution is meant to ensure freedom, mostly ensuring the government doesn't have too much control over the people. Every petty issue thats in the news these days drive me crazy. We shouldn't be arguing over such things while our government is actually defining the Constitution with talks of gun control, the good old Patriot act, ndaa, surveillance and privacy infringement... I don't care about transvestite bathrooms! Literally could care less. I care about these big issues, and believe that once we ensure our most basic freedoms, we can intellectually debate over smaller issues.

Current debates are not intellectual, and not productive from what I've seen.

A lot of stances against weed because of lies told by out government and big pharma. I'd pretty much show big pharma who's boss, and also legalize weed across the board, not to mention release all people jailed for this reason.

posted on Nov, 30 2015 @ 06:02 PM
link
Fine, but people need to stop looking at the politician or person making the proposal they don't like and screaming, "Your religious, therefore, your religion made this or that proposal! Separation of church and state!" Whether religion had much of anything to do with it or not. It's an easy cop out.

I think in some instances it's a fair question. Most anti Marijuana propaganda is just lies, falsehoods, and religious morals. None of those belong in legislation.

But I do agree it happens in the instances like you mention, and I dislike that as well.

I would also add that for the religious issue, that displaying a religious item that was DONATED would also not break that line. As long as none that were donated where left out. (If your religion didn't donate an item that your tough luck.)

As for the gay and abortion issue, also a supporter of the OP on this. (I don't personally agree with ether of these, but thats my opioion.) Per the 10th these issue should be left to the states, if they choice to do anything. If you don't like your states laws you cna try to change them, move to one of the other 49, or live with it. I'm sure that with 50 states most everybody's views could be covered.

Thats the whole reason for the 10th anyway. Almost no law is suitable for every region and people.

And after filling out a form, and a FEDERAL background check, and being 'PERFECT' she might be granted one.

Something gun owners have to submit too.

There's a big damn disconnect of what people think 'liberty' is.

posted on Dec, 2 2015 @ 12:10 PM
link
Fantastic post, OP. I think you nailed it beautifully. Perhaps this post should be listed as suggested reading when you join ATS, as an example of a well thought out, perfectly logical, and damn near unimaginably lucid post.

I sometimes seem to stay in a continual state of incredulity at people making up "rights" that they believe the Constitution grants. When in reality it was designed as a very simple document, that could be as easily understood as possible, so as NOT to be misinterpreted, and with the minimal language necessary.

I think abortion should be a right across the states. I'm personally against it, but I'm very for medical care and privacy. Abortions can be for health reasons, and due to this fact alone, I think everyone has their privacy. "why are you getting this abortion?" should not be a question asked before a woman is allowed one, not anywhere.

Right, I don't think you should need permission. Everyone has the right to their health, and privacy.

Thank you. A lot of my posts seem a bit ridiculous and some here think I'm a right wing nut because of this, but this post more reflects my honest thoughts on things. The Constitution was not created for people to use to back up every little thing they believe.

Thank you. A lot of my posts seem a bit ridiculous and some here think I'm a right wing nut because of this, but this post more reflects my honest thoughts on things. The Constitution was not created for people to use to back up every little thing they believe.

You are definitely NOT a nut. IMO you have a VERY firm grip on non-nutterism! At least in MY opinion.