“After recently becoming aware of a video which could have been perceived as threatening against the Muslim community in Hancock, N.Y., the FBI immediately took steps to notify our federal, state and local partners,” the paper quoted a spokeswoman for the FBI’s Albany field office as saying.

The FBI issued a warning to New York police that anti-Muslim activist Jon Ritzheimer could be headed their way, the New York Daily News reported Friday.

Police were put on alert after Ritzheimer posted a threatening video online on Nov. 18 warning he was headed east to "see those assholes who called me a f------ terrorist," according to the Daily News.

The newspaper reported that Ritzheimer was referring to the organization Muslims of America, which called Ritzheimer an "American Taliban" in a recent issue of its newspaper, The Islamic Post. [TPM]

Haven't seen those posted yet, but it looks like this is the same person who hosted the "Draw Muhammad" competition in Phoenix.

Sounds like a case of he can dish it out but sure can't take it to me.

He's for sure on their watchlist, and the FBI certainly appear to be taking this seriously, as are area law enforcement agencies.

He has also begged for money to “protect his family,” asked for gas money to arrest a senator for “treason,” and is some kind of lunatic militia member. The authorities never really did anything about Ritzeheimer, though — until now.

It seems that the FBI is now hunting for Ritzheimer after he threatened the town of Islamberg, New York, which is a tiny community of adherents to the Muslim faith in Upstate New York. Ritzheimer, amidst the increased hate against Muslims in the aftermath of the Paris terrorist attacks, posted a video to Facebook, specifically threatening that community while brandishing a firearm. Albany, New York’s FBI field office is quoted as saying, “After recently becoming aware of a video which could have been perceived as threatening against the Muslim community in Hancock, N.Y., the FBI immediately took steps to notify our federal, state and local partners.” [More Info Here]

The FBI got involved after a Muslim group based near Albany notified the agency that Jon Ritzheimer, 32, of Phoenix had posted a video on Nov. 18 in which he showed a gun, made profane anti-Obama statements and said he was driving cross-country to confront them, sources and a group spokesman said.

Agents were able to talk with him initially, but two days later, when he was in Scranton, Penn., he got angry and cut off communication with them. At that point, the alert, citing a “potential threat to law enforcement,” was issued, sources said. NY Daily News

Apparently this is the second time this year he's threatened to do this, drive to a town in the Catskills to attack Islamberg, which is a community of about 25 African-American Muslim families. If they're in Scranton, they're getting very close.

ETA: I don't care for this headline, as to me he's more than a protester...more like a terrorist, but apparently TPM isn't a news source and the Daily News headline was way too long. Go figure. Anyway this is still very much breaking news.
edit on 11/29/2015 by ~Lucidity because: (no reason given)

And now he is driving to NY to instill fear against Muslims and anyone who disagrees with him. That, and he appears to be armed and ready. Sounds like a domestic terrorist to me. Shocking someone filled with so much hate is a moron, right?

originally posted by: ~Lucidity
Haven't seen those posted yet, but it looks like this is the same person who hosted the "Draw Muhammad" competition in Phoenix.

Yeah, that's the same guy... A real sweetheart. I hope the FBI finds him... He can't be very smart, as advertising his intent means more people are going to be looking to stop him and many have "upped" their own security. Muslims have guns, too, Jon...

All I can say is they better bone up on New York state laws about guns. The state troopers there do not mess around either.
edit on 11/29/2015 by ~Lucidity because: (no reason given)

Violater1
+6 more
posted on Nov, 29 2015 @ 01:30 PM
link
So watch out for Christians, military veterans, Constitutionalists…heading for New York and disregard the Syrian refugees (all of them are peace loving Right?)
Don’t forget the DHS watch list: “the report warned law enforcement agencies to watch for suspicious individuals who may have bumper stickers for third-party political candidates such as Ron Paul… the return of military veterans facing significant challenges reintegrating into their communities could lead to the potential emergence of terrorist groups or lone wolf extremists capable of carrying out violent attacks. watch out for individuals with “radical” ideologies based on Christian views, such as opposing illegal immigration, abortion and federal taxes. DHS/I&A assesses that right-wing extremist groups’ frustration over a perceived lack of government action on illegal immigration has the potential to incite individuals or small groups toward violence. end times’ prophecies could motivate extremist individuals and groups to stockpile food, ammunition and weapons. These teachings also have been linked with the radicalization of domestic extremist individuals and groups in the past, such as the violent Christian Identity organizations and extremist members of the militia movement. The high volume of purchases and stockpiling of weapons and ammunition by right-wing extremists in anticipation of restrictions and bans in some parts of the country continue to be a primary concern to law enforcement.” www.wnd.com...
“Returning veterans possess combat skills and experience that are attractive to right-wing extremists,” it says. “DHS/I&A is concerned that right-wing extremists will attempt to recruit and radicalize veterans in order to boost their violent capacities” americaswatchtower.com...

This is the cartoon of mohammud that sent the 2 peace loving muslims to Texas, with the report below. 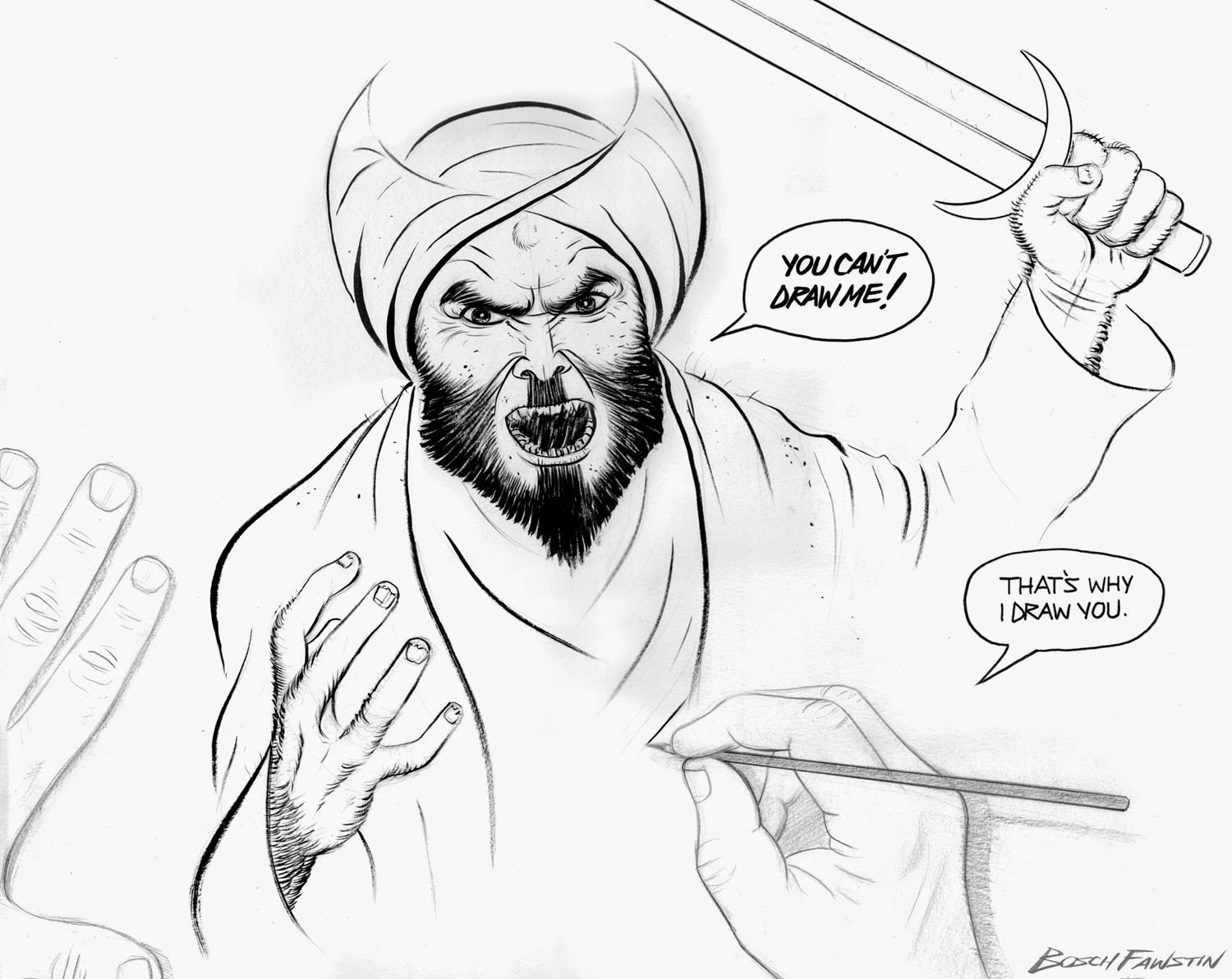 The Curtis Culwell Center attack was carried out by two muslims who attacked officers with gunfire at the entrance to an exhibit featuring cartoon of mohamud at the Curtis Culwell Center in Garland TX on May 3, 2015. Police say the two gunmen were armed with assault rifles and wearing body armor when they pulled up to the Curtis Culwell Center shortly before 7 p.m. Sunday. They began shooting almost immediately and wounded an unarmed Garland ISD security guard who was with the officer. The officer returned fire and killed the gunmen. www.dallasnews.com...
edit on V532015Sundaypm30America/ChicagoSun, 29 Nov 2015 13:53:31 -06001 by Violater1 because: (no reason given)

So, to paraphrase, the big bad government is out to get innocent Americans behaving perfectly within the law...that and you condone this sort of threatening behavior and view it as perfectly acceptable in our society.

So we have First Amendment, Second Amendment, and probably soon to be Fourth Amendment issues here. Got it
edit on 11/29/2015 by ~Lucidity because: stray comma and letter. so sorry.

Yep he did. Pictures.

The word 'So' that starts your text wall would mean that since 1 man made a specific threat and is travelling to the place he threatened that all vets and right wing people are now under threat because of 2 very questionable news sources you have. As in 'So, then.'

But your text wall has nothing to do with the OP.

I'm sure a man filled with so much bigotry will only shoot Muslims and their places of worship with a camera, not his gun if he somehow feels threatened as he threatens people.

Why is he taking pictures anyway? What is he planning, or does he have a photo album dedicated to all those he hates? I'm sure every mosque has a website with a picture on it.

Nothing suspicious about this guy at all. Definitely not someone trying to incite violence while openly carrying a weapon, which he is not allowed to bring into NY, let alone cross state lines with. I hope the FBI or state authorities intercept and arrest him.

After reading many of the FB replies, it's baffling at best. I'd say almost 50/50 in favor of this person...

IDK what this man is actually capable of, but he may have more following than not.... One thing is certainly true, he is very mad.

This isn't Minority Report. Yet you have a special gift to be able to assume a crime is happening before it does.

He threatened to have his photo taken flipping every mosque he passes!

And he has the nerve to state he will defend himself

against any jihadi who might attack him for daring to utilize his first ammendment rights.

He said he was going to take pictures of him flipping off mosques. He raised his gun in context of showing why he wasn't afraid. Not a terrorist threat, unfortunately.

I like a good knee jerk reaction but surely this is going too far.

There is a valid point and there is a point of no return, and this is the latter. I find it funny how ATS is the butt of so many jokes when there are far less intelligent posters out there- i'm looking at a few and I don't care about the six ways How Harry Potter was really Hagrid.

Well, if you're going to be traveling by car from state to state you better have all the legal paperwork to carry a gun and knowledge of each state's gun laws. You also better have that gun unloaded and locked away, like in the trunk. From that video, he has it on his person, illegal. But since we don't have a live stream of his travel maybe has his weapons locked up but we don't know. Coming into NY from out of state with a hand gun is asking to be arrested. Also, what kind of guns is he bringing with him and does his gun have magazines? Does he plan on staying overnight in NY with his guns? If so, illegal.

And now the FBI and state authorities are aware of him, he'll probably be arrested at some point so it would be best for him stay home in Arizona.

posted on Nov, 29 2015 @ 01:54 PM
link
Same MO as the BLM shooters.
Short hair - look current or ex military.
Talking smack about the favorite protected groups of BHO.
Psyops gets my vote.
If there is no news - create some!