(CNN)Turkey will not apologize for downing a Russian fighter jet it says violated Turkish airspace near the Syrian border, Turkish President Recep Tayyip Erdogan said in an exclusive CNN interview Thursday in Ankara.

"I think if there is a party that needs to apologize, it is not us," he said from the Turkish capital. "Those who violated our airspace are the ones who need to apologize. Our pilots and our armed forces, they simply fulfilled their duties, which consisted of responding to ... violations of the rules of engagement. I think this is the essence."

In a meeting with community leaders in Ankara, Erdogan said, "If the same violation occurs today, Turkey has to react the same way."

Yeah, you read that right, Turkey is not going to apologize and is clear on one thing: "If the same violation occurs today, Turkey has to react the same way.". Is this guy gone mad or what????

Here's what Putin thinks about this: Putin: Turkey deliberately leading relations with Russia 'into a gridlock' 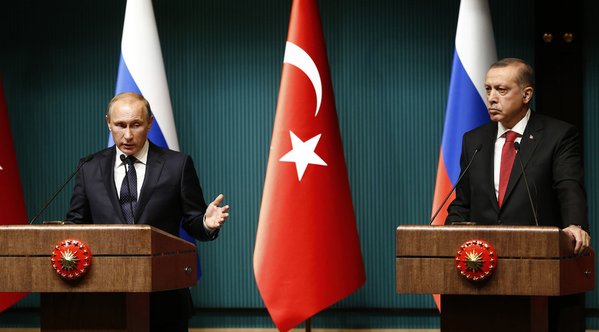 Russian President Vladimir Putin has accused Turkey of intentionally bringing relations with Russia into a ‘gridlock’ following the incident with the downed Russian bomber in Syria.
The Turkish government has made no steps towards clearing up the situation with Russia after the Tuesday incident at the Syrian-Turkish border. The country has neither offered any compensation nor expressed any apologies over the death of the Russian pilot, thus apparently deliberately dampening relations with Moscow, Putin stressed in his speech at the presentation of foreign ambassadors’ letters of credence in the Kremlin on Thursday.
...
“We have still not heard any comprehensible apologies from the Turkish political leaders or any offers to compensate for the damage caused or promises to punish the criminals for their crime,” Russian president said.

“One gets the impression that the Turkish leaders are deliberately leading Russian-Turkish relations into a gridlock – and we are sorry to see this,” he added.

And here is what others think about this...
- Turkey risks provoking next world war – Iraq’s Vice President Maliki
- Top U.S. Air Defense Commander: Turkey’s Shootdown of Russian Jet “Had to Be PRE-PLANNED”

The argument on this issue so far I have noted is, that alright it's Turkey's right to defend it's borders, but lets leave that aside and consider the real consequences of Turkeys actions.

We know that, this is not going anywhere, and it's exactly what Putin has termed "gridlock". We know for a fact, that Russia is has no plans of reducing it's military operations against ISIS, in fact they are beefing up their air security to destroy any potentially dangerous targets.

I have a bad feeling about how things are shaping between Russia and Turkey. What's ATS got to say about this disturbing turn of events between Turkey and Russia?
edit on 26-11-2015 by InnerPeace2012 because: (no reason given)

originally posted by: whyamIhere
Not every Country draws red lines then ignores when they are crossed.

Yeah, I guess, Turkey wasn't joking when they warned Russia about it's airspace intrusions, considering Turkey has a sizable military in that Region as well as being a part of NATO alliance, they weren't hesitant to poke the bear.

But my fears, are that the bear is ready to respond to anymore poking, and it's sad to note that the Turkey ain't dropping that stick it poked the bear with.

I just can't see anyway, other than this ending with each declaring war on each other eventually, and pulling the NATO alliance in on this as well.
edit on 26-11-2015 by InnerPeace2012 because: (no reason given)

posted on Nov, 26 2015 @ 07:25 PM
link
Good for them. Stuff happens during war, and they have no need to apologize. That jet could have easily gone in the other direction, and from what I can tell was not responding either?

posted on Nov, 26 2015 @ 07:27 PM
link
a reply to: InnerPeace2012
I think that Turkey's firm response is because they're backed by NATO on this.
If it was only Turkey vs Russia, Erdogan would be more cautious in his words.

originally posted by: ~Lucidity
Good for them. Stuff happens during war, and they have no need to apologize. That jet could have easily gone in the other direction, and from what I can tell was not responding either?

Well, considering that, Russia hasn't downed an Israeli jet, while Turkey shot down a Russian jet, there lies a major difference right there.

We know the usual thing to do is to escort the trespassing jets out of the forbidden zone, as Russia has been doing lately..
edit on 26-11-2015 by InnerPeace2012 because: (no reason given)

posted on Nov, 26 2015 @ 07:32 PM
link
I think Russia is perfectly justified in taking out the base and aircraft the attackers originated from at the very least.

I would like to see them use some of their latest thermobaric bombs on the savage turks cowards.
edit on 26-11-2015 by Deny Arrogance because: (no reason given)

I agree, note my other response just above yours...

posted on Nov, 26 2015 @ 07:41 PM
link
I shake my head in disbelief. Here we have a leader of a nation proud & praising on so called rules if engagent on shooting down a jet fighter for violation of his countries airspace. All while the turks are more then happy to violate other countries airspace, greece being one example, over 2000 violations of airspace over greek airspace just last year! Seems the turks are living in a world of self entitlement & sheer arrogance. Be very afraid of this looney president of turkey....
edit on 26-11-2015 by MegaSpace because: (no reason given)

posted on Nov, 26 2015 @ 07:45 PM
link
i say go turkey,there has been so many news storys recently about russia invading british air space and having to be escorted out,only other day there was story about a russian sub being spotted and it getting hunted down by us and our french friends may i add, cause guess what the UK no longer has any specialist sub-hunting aircraft.

as you see in story they also had to intercept planes,what do they expect when they keep thinking they can just do what they like?

turkey grew a pair and said it aint happening,they picked a country who obviously said i aint taking your crap.

originally posted by: ~Lucidity
a reply to: InnerPeace2012


Am sorry your response doesn't make any sense to all, since when did Turkey and Russia go to war?

We are talking about Turkey bringing down a Russian jet and are deliberately refusing any political dialect with Russia in deescalating the tensions.

War is messy alright, but there ain't any direct war between Russia and Turkey. If anything I bet you are oblivious to what garbage Erdogan is spewing to further escalate this situation.

And oh FFS. So now it's the U.S.'s fault? Or maybe even evil plan? Tell me this is a translation error or something. Did Putin really go here?

"The American side, which leads the coalition that Turkey belongs to, knew about the location and time of our planes' flights, and we were hit exactly there and at that time," Putin said in Moscow Thursday. "Why did we give this information to the Americans if they did not pass it along to the rest of the coalition?" [Source]

I''m out of all this nonsense. So next Putin will be demanding an apology from the U.S. for a war he chose to engage in. Total lunacy.
edit on 11/26/2015 by ~Lucidity because: (no reason given)

posted on Nov, 26 2015 @ 08:03 PM
link
There are many, many ways for Russia to deal with Turkey that do not involve military aggression.

a reply to: sparky31

Russia has never entered UK airspace. They have been escorted away while flying in international airspace. NATO probably does the same thing to Russia by flying close to their borders. It's like a training exercise or a drill to keep the Air Forces on their toes.

I mean seriously? Don't American planes fly in and out from your bases into Syria????

Oh really? Who is really pointing the fingers here:

President Obama pointed the finger at Russia over its warplane being shot down by Turkey, suggesting the incident might not have happened if Moscow were more concerned with hitting ISIS targets than moderate opposition to Syria’s Bashar Assad – a campaign that puts them dangerously close to the Turkish border.

The president, speaking Tuesday alongside visiting French President Francois Hollande in Washington, stressed that officials are still gathering details on the international incident.]Obama

is a useless organization, from our perspective, and serves no useful long term purpose.

if Obama wants to be remembered for doing anything useful during 8 years in office it would be to discard NATO.

as a bonus he'd see a great many problems clear up real fast.


We know for a fact, that Russia is has no plans of reducing it's military operations against ISIS, in fact they are beefing up their air security to destroy any potentially dangerous targets.

Russia has done dick all against ISIS. Is there a single city Assad forces have reclaimed from air strikes in the last 2 months? Seriously if it was as Putin claims, there should be noticeable difference. But the reality is Russia is helping Assad with his war against his own people.

The reason there are so many refugees is because there are only 3 options in that country, be conscripted by the national army (fight for Assad), be forced to live under or fight for Extremists, or lastly fight in the FSA which is up against insurmountable odds.
edit on 26-11-2015 by boncho because: (no reason given)