posted on Nov, 24 2015 @ 08:42 AM
link
In this video at 5:03 we hear raincoats are extremely valuable, but wellingtons are not wanted, despite the wet and muddy conditions underfoot at the Calais camp.


These have been asked for specifically.

There's a thriving community building at the camp, no sense looking like a refugee.

The camp's unrelenting development is driving unintended social consequences. A growing class of migrants has businesses and religious flocks to oversee. Google Maps has even begun to pin camp landmarks, including the Doctors of the World first aid huts.

"They have been stuck here for months, so they try to make the most of it," said Calais volunteer Pascal Froehly, a retired high school English teacher.

"A few months ago the usual answer you got from them was: London tomorrow! They weren't thinking of settling down here until they found out England isn't as easy to reach as they thought," he said, speaking over a din of saws, drills and hammers as another convenience store and fast food counter took shape.

Afghans have built more than 50 businesses lining the camp's main junction for a kilometer (half mile) in each direction, aided by settled relatives in France or Britain who bring supplies by car. With no taxes or wages to pay and a captive market, the illegal shops can be surprisingly profitable. Buckets serve as cash registers.

At night, some drink cans of beer for 1 euro ($1.10) each under the swirling lights of an electronic disco ball at the Sahara, one of several African-run bars in the camp.

In recent weeks the camp has received many visitors, which has caused further distress for the refugees. In particular, the taking of photos has caused tension. The charities on the ground are also becoming overwhelmed by the number of visits, which can distract from their vital day-to-day work. With this in mind, we would discourage all non-essential visits to camp. If you do have to go to the camp to advance a project or to deliver aid, we can provide cautionary advice about how to try to avoid causing offence. Among other things, there is volunteer who visits the camp on Wednesdays (only) who would be happy – if essential to your visit – to take you around as she carries out her duties. Please bear in mind that you will need to assess any risks involved – for example there have been several incidents of inter racial tensions – but remember too that most inhabitants are asking only for a modicum of decency and dignity.

Some organisations, such as the above, have been overwhelmed by donations. Many donations are unsuitable and just take up valuable storage space and sorting time. Best stick to the most up to date items needed list.

This seemed to go well.

This not so well.

Shoes are in high demand in the camp, now more than ever. Trainers don't last long when you're walking in ankle deep mud and many people have only canvas shoes, sandals or flip flops. We'd taken along dozens of pairs of sturdy shoes and boots, all bagged according to size, and in our naivety we thought we could distribute these from the van. We spent the best part of an hour trying to get people to queue in single file so we could safely open the doors and give the shoes out. Every time we opened the door the crowd surged forwards, turning the single line into a melee. At one stage I was crushed against the back of the van by the weight of a hundred people. “One line, one line!” we called out, over and over. Eventually the cry turned to “No line, no line!” as we realised that to continue was to put people at risk and to dehumanise people already treated by so many as animals.

We moved the van to a different location to try again . . . 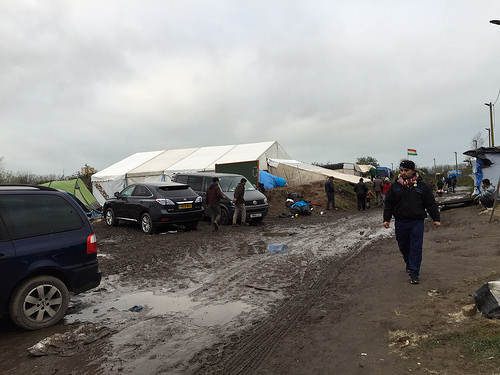 We went back to the van and attempted to distribute shoes again. A Sudanese man on a bike was wearing a pair of women's open toed sandals. Other people had shoes too small, or too inadequate to keep out the rain and mud. A young Afghan guy was wearing trainers three sizes too small, the backs walked down. He looked so sad. We had shoes; we had to help. We gave out a few pairs, including some to the Afghan man, but they were too small. He gave them back, asked for someone else to benefit from them. The line quickly became a scrum. We tried distributing one size at a time but a scuffle broke out, grown men fighting over a bin bag of second hand trainers and wellingtons. It was difficult to watch, degrading for everyone involved. Intelligent people who are utterly and totally desperate and broken. The Afghan guy managed to get another pair of shoes but again they were too small. He handed them back, his sad face becoming even sadder. It was heartbreaking to see. We tried giving shoes out to order, finding the people most in need, but every time we opened the van the crowd pressed closer. The Afghan man stood nearby, waiting patiently. “Shoes?” he kept asking. “Please, shoes?” We conceded defeat and decided to move the van somewhere else. I spoke to the young Afghan and asked him to come with me and I would try and get him shoes, but made him no promises. As we walked, he told me his name – Refaz – and a little about his life in Afghanistan, where his family had been killed, where he had been tortured. It was a harrowing tale. Eventually we found a quiet spot and I asked Darrell to please try and find some shoes for my new friend. When I handed over a pair of sturdy shoes Refaz's face lit up. He put them on – they were a perfect fit – and the sad look was replaced with a beaming smile. “Thank you, my friend, thank you,” he said.


Wellingtons are associated with slavery in the mines, working on the land, muddy building work and other dirty jobs. They are not socially acceptable footwear in the Calais camp. Here we have confirmation from Cambridge University. Wellingtons are not needed. www.polis.cam.ac.uk...

I would like to debate this point with Cambridge University.

I say wellingtons are needed.
They are not wanted.
Because they aren't fashionable.

Without proper socks designed for such wear, blisters, sores and the like can develop within hours. This could cause further long term problems in such living conditions.

I do not blame them. Waterproof walking boots, whilst slightly more expensive is the best solution under such conditions.
edit on 24-11-2015 by Nexttimemaybe because: (no reason given)

There are huge problems with trench foot as it is. Wellingtons and cheap liners would help enormously. Walking long distances in wellingtons isn't a good idea. Many people use them in wet conditions and have healthier feet as a result. Socks are easily loom knitted or made out of sleeves of discarded jumpers. Boot liners can easily be stitched up out of fabric from unwanted clothes. There are huge quantities of over-donated items, many totally unsuitable for use as a garment in the circumstances. Raw materials for self made socks. Some of those over donated items are a part of the litter volunteers pick up.

Socks are known to be a desperately needed requirement and are being sent by the van load. Having had a report of the problem with trench foot from a group who are taking socks there soon, I can't see wellingtons doing anything other than improving general foot health in the Calais camp.

What we are seeing is an explosion in foot health problems that can only be fashionably dealt with by providing the more expensive option. It could be helped dramatically by acceptance of the wellington as a socially acceptable item of footwear. Waterproof walking boots also require regular changes of socks to keep the feet healthy.

originally posted by: Kester
"They have been stuck here for months, so they try to make the most of it," said Calais volunteer Pascal Froehly, a retired high school English teacher.

To clarify:
THEY ARE NOT STUCK THERE, THEY CHOOSE TO NOT CLAIM ASYLUM IN FRANCE BECAUSE THEY WANT TO ENTER THE UK ILLEGALLY. THEY KNOW FULL WELL THAT IF THEY REGISTER IN FRANCE, AND SUBSEQUENTLY MAKE IT INTO BRITAIN, THEN THE UK WILL SEND THEM BACK TO FRANCE.
THEY ARE NOT 'STUCK' THERE!

Some young men are now choosing to stay now because, "The shops have everything we need". It's a self contained shanty town with co caine and nightclubs open till 4. The women hide for fear of rape. Photography is forbidden by the mafia.

It's easy to get material for an article like this one. www.bigissue.com... Only the nice people will talk to you and let you take photographs, so that's the only reality you can report on. Sweet.

Not having wellingtons means you can't reasonably be expected to help the welly wearing volunteers as they wade through the sludge, clearing up the discarded rubbish and unsuitable or excess donations. Shame.

Many people taking goods and services to the Calais camp just want to brag about how wonderful they are when they get home, according to my contacts who are taking socks there. From what I've seen of these videos, some of the female aid workers are using this as some kind of sexual substitute. It's weird and unhealthy. I don't hear enough from the female aid workers about the women hiding for fear of rape.

Getting to your point. As someone who was homeless and travelling for years I never understood why some people cluster together, then wait in situ while eviction, disease and other dangers approach slowly and predictably.

There will be a number who are 'stuck', need help and have reasons to be on this side of the channel.

Those who live alongside the rape and co caine, make no effort to clean up, go through numerous shoes because they won't wear unfashionable wellingtons, and run like the wind when the police dogs are after them, aren't stuck. They can up sticks and move. Being work-shy and feckless won't make them welcome elsewhere. It's an attitude problem, and attitude is a personal choice.
edit on 25 11 2015 by Kester because: (no reason given)


Victoria said: “I will never forget taking muddy soggy Ugg-style boots off of a three-year-old boy’s feet, and the joy on his face when we handed him a pair of batman wellies and a winter coat.