posted on Nov, 22 2015 @ 11:35 AM
link
You never know what will show up on eBay. In this case, a professor of early Christianity at the University of Texas, Geoffrey Smith, stumbled upon a listing for a credit card sized fragment of papyrus which he preliminarily dates to the 3rd or 4th century CE. On one side of the papyrus are six lines of the Gospel of John from the Greek New Testament and on the reverse, an unidentified Christian text. 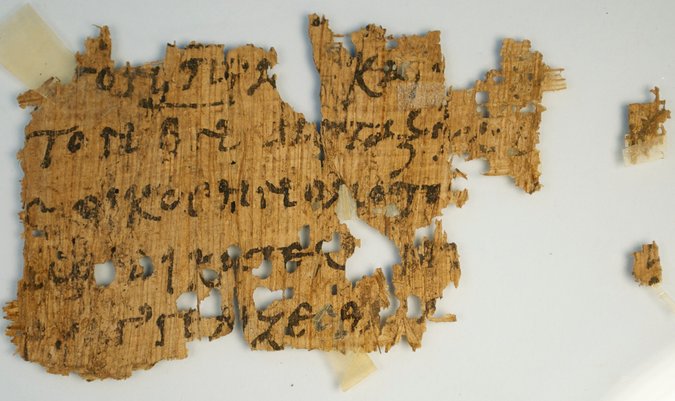 Greek New Testament papyri are among the oldest and rarest traces of Christian scripture. Only about 130 have been recognized by the Institute for New Testament Textual Research in Münster, Germany, which registers New Testament manuscripts of all types and oversees the effort to reconstruct the Greek initial text from surviving variants.

They are also a new entry into the growing — and, many scholars say, ethically questionable — online marketplace in ancient papyri.

“History doesn’t belong to one person,” said Brice C. Jones, a papyrus expert who tracks online sales, and who wrote about the eBay listing on his blog the same day Dr. Smith noticed it, inadvertently sending bids shooting up.

“Collectively, globally, it’s ours,” continued Dr. Jones, who also communicated with the seller, who wishes to remain anonymous. “It needs to be available for research, to be put on display.”


While the original provenance of the Gospel of John papyrus is not known, Dr. Smith said that ownership appeared to comply with the Unesco convention, which declares that cultural property legally acquired before 1970 cannot be subject to repatriation claims. (Virtually all papyri come from Egypt.)

Dr. Smith declined to identify the seller. But in the text of the listing copied on Dr. Jones’s blog, the seller said the papyrus had been in the private collection of Harold R. Willoughby, a professor of early Christianity at the University of Chicago who died in 1962.

The fragment, which was encased in glass, “literally fell out of a stack of letters,” the seller said in the listing.

Dr. Smith visited the current owner in New Hampshire and examined the papyrus in person. He remarked that it didn't appear to have suffered recent damage and he's urging the the owner to donate it to a research library.

Many researchers refuse to study artifacts of this nature with good reason — it drives the black market in antiquities. Museums are full of controversial artifacts and proven hoaxes purchased from unscrupulous antiquities dealers and outright forgers. Important ancient sites the world over continue to be looted, often by poor locals who are understandably more concerned with the practical concerns of day to day survival than preserving historical evidence and cultural heritage. Sites and relics are damaged, context is irretrievably lost, provenance is often unobtainable or murky at best and otherwise significant finds wind up in private collections where they'll never be available to researchers.

Smith makes a good point though; there is an abundance of legally owned artifacts from before current laws were in place and some exceptions should be made in these circumstances lest researchers find themselves cutting off their proverbial noses to spite their collective faces.

Is there a buyout price? If not, I wonder how high the bid will get!

posted on Nov, 22 2015 @ 07:18 PM
link
There is a book in Jordan I am keen to see
They believe it to be among the first bibles
The pages are copper I think
But what fascinated me was at the top of every page was a letter T
Is it possible Christ was crucified on a T
And not a cross
We are at a time of revelation
When God will reveal the truth and his secrets

Good to know if I find something of value I'll keep the information to myself.

"Donate" pleaseee, more like let's take what's yours and not give you anything in return, sound fair ?

The seller should take the professor out to dinner, or buy him a nice Christmas gift if the price rises as high as it should. An interesting thread, and a very observant professor.
edit on 23-11-2015 by Aleister because: (no reason given)

i think it got sold because its not listed on ebay

posted on Nov, 23 2015 @ 10:30 AM
link
The original listing was last January and I believe once the seller was contacted, the auction was ended. Looking at eBay right now, there are actually some ancient papyrus fragments up for auction but they're tiny tiny fragments.

The majority of Egyptian antiquities are ushabti which are small figurines that were buried with people in the belief that they'd be the minions of the deceased in the afterlife.

posted on Nov, 23 2015 @ 11:36 AM
link
I'm of two minds on this. On one hand, I like to see ancient documents preserved as much as the next guy. On the other hand, to hell with it. Things get lost and vanish into history. Not everything has to be saved and not everything can be saved. In fact, losing documents and artifacts makes the surviving stuff worth more.

Having personally moved from place to place relatively frequently, I know that a good portion of your personal possessions can be purged during a move and life still goes on. In fact, I note that purging tends to get rid of the plain and ordinary stuff, and leaves you with the best stuff. I think this probably applies to art and literature. Just because a Greek guy wrote a play doesn't mean it was all that great. Just because a huge number of silent movies have disintegrated doesn't mean the bulk of them weren't just cranked-out crap.

I don't have a problem with an individual owning a private collection of precious artifacts. They'll likely be highly motivated to preserve them in a way that your average museum can't even afford. And really what's the big difference between a museum and a private collection anyway? One just lets me (the unwashed public) gawk at the pieces.

I don't see a problem with it being in a private collection. Many private collectors take better care of the items than the museums do. I personally have a number of odd and interesting antiques that I have been told should be in museums. Among some of them are some very VERY VERY old books that are not printed but hand copied and hand bound some over 200 years old. (by the way preserving old paper is a pain in the butt, this buyer best know how to preserve that or it wont last them long)
edit on 23-11-2015 by sycomix because: Corrected error