posted on Nov, 22 2015 @ 09:46 AM
link
As many countries are protesting against ISIS with candle sticks in solidarity with each other, together hand in hand to give a clear message that we don't let ourself being intimidated by this unorthodox way of bringing fear death and destruction to the native civilians and bribe them with salaries , to fight in the name of ISIS to chopping off heads and mass murder to keep their families alive.

Not knowing that their lifespans will drastically lower as they would join this club of terror..

Now there's another way to protest against ISIS and that's to place this under your City signs , 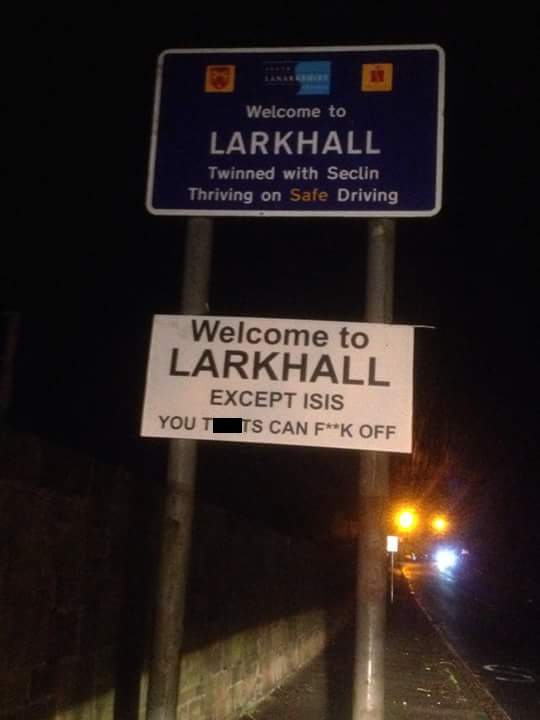 The Scottish town of Larkhall wants nothing to do with IS and let that be clear after the attacks in Paris. At the approaches to the village, not far from Glasgow, among the official municipal sign hung a message that says :

There are many positive reactions to the unusual warning from the 15,000 inhabitants. It is a confirmation that the Scots humor, says the most common reaction on social media. "Scotland will win the battle against IS".

It's great to see how the Scottish handle problems their own way..

posted on Nov, 22 2015 @ 11:34 AM
link
The president of Poland is saying the same thing (not in those words!)
The Northern League also feels the same.
We know Europe wishes they had said that.

Look at all these Syrian men flooding Europe:
www.facebook.com...

No widows and orphans there! And that is just one of several reported armies of men, just like it.

A massive "army" of able-bodied Muslim men who claim to be refugees is continuing flood into Europe and the governments in the continent appear unwilling to consider the danger such an invasion poses on their own people.

In just a span of 24 hours on Wednesday, scores of refugees flooded into Slovenia on their way to Austria. But what was alarming, was that many of the refugees were men who did not look like impoverished and maltreated Arab nationals. It looks more like an invading army than a peaceful flight of the downtrodden.

An estimated 10,000 migrants have walked across the Macedonian borders in just one day, with "the latest wave flooding across Europe ... all men."

Now, if only the arrogant American president would listen to the majority of the u.s. States, and say the same thing!

Ah that made me laugh.
Isis are probably safer not going into Larkhall, it's a wild place. (Only joking if you're reading this in Larkhall, don't batter me )

Just a wee fyi - refugees and Isis aren't the same thing. We've got refugees coming, in fact they came this week. It's just Isis that can # off!

posted on Nov, 22 2015 @ 12:13 PM
link
Larkhall has never been tolerant to anything other knuckle dragging bigoted arseholes.

They used to have a chinese takeaway called The Orange Wok or so the story goes....

Sounds great, I guess I'll be fitting right in then.

Sounds great, I guess I'll be fitting right in then.

If you're a knuckle dragging bigoted arsehole just like members of ISIS then i'm sure you would. oh the Irony.

The irony is a whole town qualifies under A broad brush of "knuckle dragging bigoted arseholes" for telling Isis to # off. Interesting concept.
edit on 22-11-2015 by TechniXcality because: (no reason given)

The irony is a whole town qualifies under A broad brush of "knuckle dragging bigoted arseholes" for telling Isis to # off. Interesting concept.


Catholics, Jews, Pakistanis and basically everyone else who doesn't fit into there narrow minded agenda can #### off also.

Scottish town where green is beyond the pale.
edit on 22-11-2015 by Soloprotocol because: (no reason given)


Companies setting up shop are forced to change their livery. Traffic lights are smashed in defiance. It seems astonishing that a town could detest something so much, but Larkhall does.
For it is green that provokes so much ire in this Lanarkshire town just outside Glasgow. Yes, the colour.

I'm amazed they still got trees with leaves on it , So if there are ISIS members among the refugees I say wear green they love it..

The irony is a whole town qualifies under A broad brush of "knuckle dragging bigoted arseholes" for telling Isis to # off. Interesting concept.

Not because they're telling Isis to # off - that's just Solo's opinion of them irrespective of what their message to Isis is! It's a well known protestant/ Rangers/ Unionist town . It's a long story basically.

a reply to: Observer1

Tell them to wear a Celtic top, y'know to 'blend in'. Isis no more!

Just a wee fyi - refugees and Isis aren't the same thing. We've got refugees coming, in fact they came this week. It's just Isis that can # off!

It's just that the whole point of the conflict of opinion on Syrian refugees, is no one can know for sure which are refugees and which are ISIS.

Great sign, just not sure how effective it will be.
Still, great sign, sorry to go all serious on something whimsical!
edit on 22-11-2015 by 222mockingbirdlane because: (no reason given)

No need to apologise! Despite Solo being pretty much spot on, I think it kind of sums up a lot of Scottish attitudes towards Isis.

Let's just get the refugees in and settled, then worry about Isis.
Will the sign be effective? Almost certainly not, they're unlikely to read it. We should stick it on our flag instead.

WARNING very strong language and adult content that may make you wet yourself.