David Bowie is Back, surreal and weird new video for "Blackstar"

posted on Nov, 22 2015 @ 07:03 AM
link
Rock Legend David Bowie has got a new album out on the 8th of January, the day of his 69th(!) birthday.
Just released is this 10 minute long video to the title track, not sure if the album version will be as long though.
Anyways, it goes a whole different direction from 'The Next Day', his last album or from anything else he's ever done. He worked with Jazz musicians for this, and the atmosphere is weirdly hypnotic and surreal, and the images in the video are just creepy.
The first time I heard it I was just confused, but on the second listen i got it (if there's anything to get, lol) and can't wait for the full album! 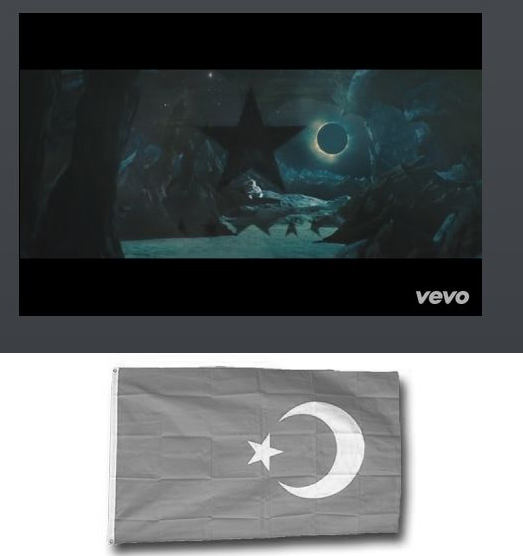 As an old man he is not hiding it well.. maybe it was the point

What's he not hiding it well?
There is so much potential symbolysm in that video.
So you are saying there is a nod to the current Islamist Extremism thing? (is that the turkish flag you added?)
I definitely see some sort of religious comment in the video.
Thanks for adding the lyrics, I wonder what he means by I'm the Blackstar, and what's the villa of Ormen?
hmmm

Not Turkey the symbols are used in all kind of positions when together in all kinds of flags. I think it reflects situation around the Word atm. Noticed the star and Moon and 13 wifes.
Ormen is a place in Norway so i supposed this is not it.
Blackstar is crescent moon

Oh duh, thanks for that, makes sense

Now that's the David Bowie I wanted to see again.

At 0:20 it reminds me White Rabbit by Jefferson Airplane.

posted on Nov, 22 2015 @ 08:41 AM
link
Very Bowie... Very weird... I think hes talking about how religious zealotry goes against the grain of everyday human spirituality, and leads to an inflated ego, rapturous insanity, confusion, false piety, and disassociative personality disorder.... An awesome and extremely sharp critique of the state of the post 2012 21 St century "new age movement" he himself was a pioneer of in the 70s with Ziggystardust, perhaps.
edit on 22-11-2015 by 0hlord because: (no reason given)
edit on 22-11-2015 by 0hlord because: (no reason given)

I'm going to go a different route on this.

#1 Ormen Lange is a strange story about a king that wouldn't convert to Christianity.
heres the link en.wikipedia.org...

#2 the villa of the Ormen could mean the church of Ormen. villas became small farming compounds, which were increasingly fortified in Late Antiquity, sometimes transferred to the Church for reuse as a monastery.

#3 Ormen Lange the location is a natural gas field on the Norwegian continental shelf.

#4 convulsing body's is a symptom Arsenic is a nasty substance, and in strong concentrations it causes all manner of blood-streaked gastrointestinal distress, convulsions, coma, and death. In smaller, chronically consumed amounts (such as that found in contaminated groundwater), it is known to inspire a host of diseases not limited to cancer, heart disease, and diabetes.

or maybe this gas which was used by the Israelis on Palestinian people the symptoms almost fit perfectly to the convulsing people in the video www.vtjp.org...

David Bowie is great I loved his and trent reznor im afraid of americans song
edit on 22-11-2015 by jobless1 because: (no reason given)

What's there to get? It's just a hypnotic regression to principles of hedonism, speculationism, and fantasy tropes viewed through the lens of psychotropy and using gravitational impulse and choreographic/symphonic variances as proxy for the godhead, making us contemplate our resonance within the spectrum of the Om.﻿

posted on Nov, 22 2015 @ 09:38 AM
link
a reply to: athousandlives
I think Bowie is looking back on his life of fame, realizing it was all wasted because he has no followers, and making one last attempt at mystifying the masses into believing in his greatness. hence the references to Christ and Mary.

Bowie is a genius. Gotta give credit were credit is due.

posted on Nov, 22 2015 @ 03:52 PM
link
I'm a huge Bowie fan. I like the discordant percussion and horns and the classic Bowie vocal harmonies in this song.. Deep lyrics. I wasn't overly crazy about the tune until the second or third listen. Much of his music has been that way for me -- has to grow on me. He is incredible in everything he puts his hand to. Thanks for the heads up!

posted on Nov, 22 2015 @ 05:25 PM
link
I think it's safe to say that David has sold his soul to the devil. Call it art if you want but I see idolatry. Satan is at work sending out his symbols and messages to brainwash the masses into thinking this is "cool" and "acceptable". its straight up mocking Jesus. From the book he is holding up with the star symbol on it as if its a book of importance but not being depicted as the bible to refering to himself as the great I am. I mean, come on! To worshipping and bowing down to a skull adorned with jewels. Its full of paganistic rituals.


Bowie is a genius. so is bibi netanyahu , with an IQ of 170. He gets away with his IDF killing one child every 60 hours..for 14 years. and so was Einstein, who got the atomic bomb underway with the Manhattan project. thanks so much Albert.
Where is his soul? Yours? Mine?
a little gedanken experiment. delete all of Bowies work from the collective conscience. What would be the difference?

This is a terrible video. All the arm movements look like spell throwing and the convulsings look like possession. It appears to be a black magic ritual to usher in the false savior. One thing we know for sure though is Bowie is afraid of Americans because God is an American.

Well it would be foolish of me to try and estimate the value of his work and the contribution he makes to society as an artist. Bowies work is priceless.

Especially his latest masterpiece. Every frame has meaning.
edit on 22-11-2015 by 0hlord because: (no reason given)

the song is just so interesting from so many different angles. First you have the obviously off tone chant "im a black star". The saxophone giving the song a interesting middle eastern feel which changes into free style jazz at points, A simple drum line and futuristic keyboard sounds. The song at times almost sounds like its in reverse yet its not. Its like he trying to mix future, present and past into one song. which you also see in the video, ancient city, astronaut, yet people dress as they do now. the song is really kind of awesome. I'm amazed that Mr Bowie can still be so innovative in trying to create a new song, not following a music script formula.

Add in the video which is strange and otherworldly yet so familiar.

I don't know. It was kinda boring for me. I like his old stuff, don't get me wrong--but this type of thing isn't my jam
The bandage with the eye thingys is especially...uh...Avant-garde.