posted on Nov, 21 2015 @ 07:38 PM
link
I have never forgotten this incident and I have often wondered exactly what I saw that day.

I was flying on a Blackhawk with some members of the FBI's Hostage Rescue Team and we were headed to Lakehurst, N.J. on work related business.

Over New Jersey, where I assumed at the time was the pine barrens, we passed over a small pond with a dead tree in the middle of it. We were around 1500 feet or so at the time, and I saw what had to be the biggest bird I have ever seen in my life. It looked like a big eagle or hawk, but I would estimate the wing span at to be at least 10 feet, possibly as much as 15 feet.... it was absolutely freakin huge.

do you remember any coloring on the bird or any markings that stood out? could it have been an owl? those can get pretty freaking huge.

Not really other than it was brown. Nothing really distinctive other than its abnormal size. The other birds I saw around that time looked like tiny specks.... this thing was huge compared to everything else. I didn't have a headset on that day so I had no way of telling everyone what I saw until we landed.

It made a good enough impression on me that I can still recall that day very clearly. I have often wondered just exactly what it was I saw.

lol... being 57, I have seen a lot of things in my life, but only four stand out as things I can't explain.

1 was a UFO when I was 12 or so camping out in the back yard. The other three were animals: The bird I mentioned, A large black like cat animal in western Ky, another animal/bat while camping out another time, that one was waddling across the ground towards us before I yelled and scared it off.
edit on R002015-11-21T20:00:21-06:00k0011Vpm by RickinVa because: (no reason given)

Can you draw at all? I'd be interested in seeing a sketch of how big this bird was if you are able. I take it, that, being someone who has flown around, you've seen your fair share of birds and could tell that the one in question was an anomaly. Very interesting. I wonder what you saw, too.

Wouldn't do me any good to draw it.... it looked like a falcon to me.... except way way bigger than any falcon I have ever seen.

I know in captivity anyway, they've been recorded > 9' and they are native to NJ and brown and of course, look similar to hawks.
edit on 2015-11-21 by theantediluvian because: (no reason given)

Probably what is was.... a very large eagle. It was huge though lol.

originally posted by: Meldionne1
Isn't Nj where the bird man or moth man has been seen? ...

I believe the Mothman was West Virginia.

Probably what is was.... a very large eagle. It was huge though lol.

Yeah, I saw one in a natural history museum when I was a kid and it was a massive bird. In fact, it's the only thing I specifically remember from that museum.

Golden eagles can be rather large, with wingspans upwards of 9', so 10' wouldn't be out of the realm of possibility.

Immature bald eagles can be very large as well.

New jersey is home to the Jersey Devil. A large, bird like creature that lives in the Pine Barrens. Wikipedia gives a good summary of the legend.

I'm not saying you saw a Jersey Devil all those years ago, but like most areas of the world, the Jersey Devil is one of many dragon/giant bird myths.

posted on Dec, 20 2015 @ 10:13 PM
link
I'm surprised no one here has mentioned thunderbirds. Look up Argentavis Magnificens. It was recorded as the largest bird able to fly, and some people believe it's still out there. There are many accounts, people attribute sightings of giant birds to this beast. Here's the link: argentavis.net... Either that or you might have seen a Steller Sea Eagle. They're predominantly found in the Asian region, but have been spotted around the Americas as well. a reply to: RickinVa 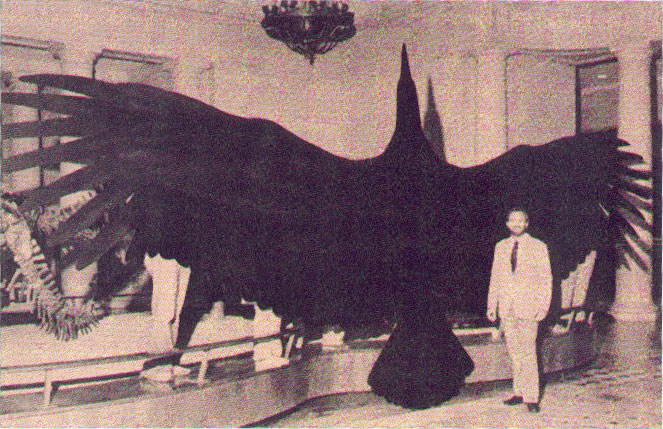